Prime Minister Scott Morrison is being urged to live up to his end of the deal struck with the Nationals to secure their support for committing to net zero emissions by 2050 and deliver on a promised fund to help regional Australia deal with the cost of climate change.

Mr Morrison returned from a United Nations summit where he pledged $2 billion for developing nations as the Nationals raised concerns federal cabinet’s net zero decision is yet to be matched by significant funding to help communities deal with a tough economic shift. 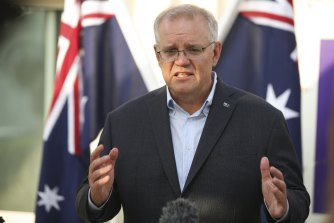 Prime Minister Scott Morrison is fielding calls from senior Nationals to make sure a promised regional fund is delivered.Credit:Alex Ellinghausen

With world leaders making slow progress at the climate summit, the Nationals have revived their concerns about whether too much is being expected of regional Australia when countries like China and Russia have refused to make new pledges to cut emissions.

In a significant intervention, three senior Nationals are calling on the Prime Minister to deliver the promised regional fund, showing a level of concern within the junior Coalition party that they may not get what they asked for in the net zero deal. The amount of money the Prime Minister is intending to put into the fund has not been settled.

Mr Morrison is due to return to Australia on Thursday morning after a one-week overseas trip to the G20 in Rome and COP26 summit in Glasgow, where a split between wealthy and developing nations stalled a new pact to cut emissions.

Nationals leader Barnaby Joyce and deputy David Littleproud have raised the regional fund as part of the deal this week, but have not said how large it would be or what it would be used for.

The Nationals presented the Prime Minister with a list of demands before the party room voted 12 to nine to endorse net zero and the headline act was a regional fund to target support at regional communities most affected by the switch to cleaner technology.

Mr Joyce said the fund was needed to provide a parallel income for the regions.

“They need a fund that actually inspires new businesses that will employ people to start up, if what the globe is saying is going to happen,” Mr Joyce said.

While India made a significant pledge to reach net zero emissions by 2070, the goal came with a call on developed nations to spend $1 trillion so the poorest countries of the world could adapt to rising temperatures.

Nationals Senate Leader Bridget McKenzie said the challenges in Glasgow show it was right for her party to insist on safeguards for the bush in the cabinet decision to endorse net zero by 2050.

Senator McKenzie voiced her support for the government’s decision to offer $2 billion in climate finance to developing economies over five years, an increase on earlier commitments of $1.5 billion. The money will go to programs in developing countries that could help communities prepare for disasters or deal with water and food security challenges linked to climate change.

“It is worthy to spend $2 billion to help countries in Australia’s region but we also have to ensure that we are also looking after people at home in the regions who are most likely to be impacted by future governments’ climate policies,” Senator McKenzie said.

“If China needs time and help then so does Chinchilla.

“The great divide between warm aspiration and cold political realities seems as wide as ever.

“The Nationals sought to mitigate some of those Australian domestic issues by insisting on security for the regions.”

Mr Morrison said on Wednesday Australia would not pressure other countries to cut their pollution levels but would instead work with them, particularly developing countries like Indonesia and Vietnam, to develop cleaner technologies to cut carbon emissions.

The Nationals’ list of net zero demands also included a commitment for the Productivity Commission to review the economic impacts from net zero every five years and a review of the impact of the Environmental Protection Biodiversity Conservation Act on development approvals for mining and agriculture projects.

While there is no commitment to change the law, the Nationals believe there will be a review of economic impacts at some point in the future.

The Nationals deal also secured an extra cabinet spot for the party, a commitment not to update Australia’s 2030 emissions reduction target, as well as two initiatives championed by Barnaby Joyce – a $3 billion rail line through coal country from Toowoomba to Gladstone and more investment in the Regional Investment Corporation, which offers low-interest loans to farmers.