A man dead in a locked room, stolen cash and a suspect reported by his wife: Murder that shook 1850s Dublin is re-examined using evidence seen for first time in 160 YEARS by author who claims bungling police helped the killer escape

It was the most dreadful crime Dublin had seen in years.

On the morning of Friday November 14, 1856, the chief cashier of the city’s Broadstone railway terminus was found dead on the floor of his office, lying in a pool of his own blood.

George Little’s throat had been cut, his head battered almost beyond recognition. Around the room lay piles of cash, hundreds of pounds in gold and silver, and the door was locked, apparently from the inside.

Who could have committed this sickening murder? If the motive was robbery, why had so much money been left untouched? And why would anybody kill the unassuming George Little, a man renowned for his kindness and integrity?

Drawing on a cache of documents left untouched in the National Archives of Ireland for 160 years, author Thomas Morris forensically unpacks the murder enquiry that made headlines across Ireland and Britain in The Dublin Railway Murder, out now.

Here, in a piece written exclusively for FEMAIL, Morris reveals how the police investigation into Mr Little’s murder was bungled from the outset, and introduces the unlikely involvement of a phrenologist who believed the primary suspect’s guilt could be proven by studying the shape of his skull… 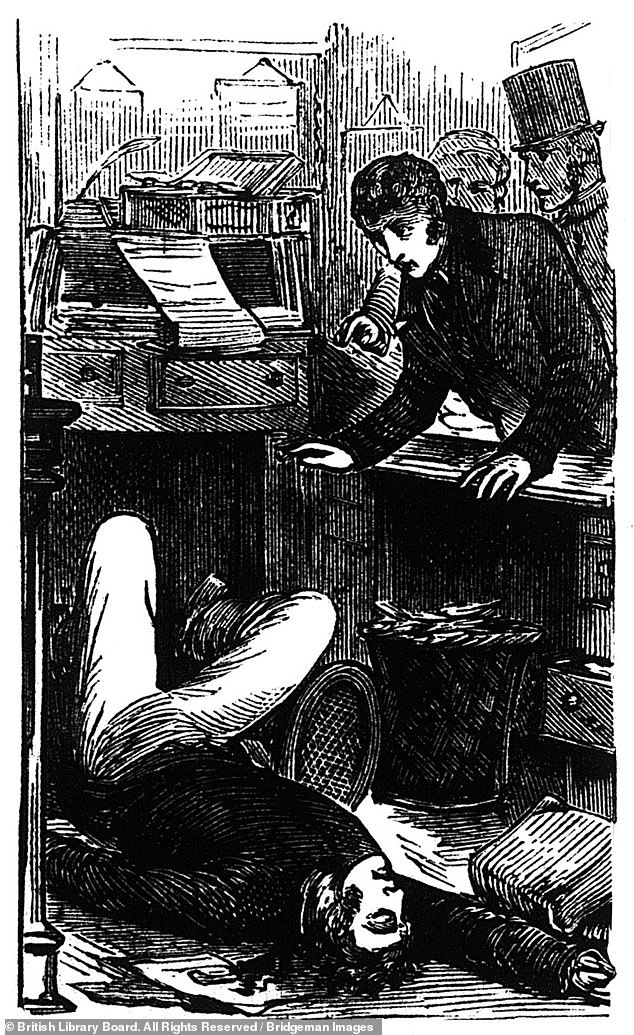 THE MURDER VICTIM: On the morning of November 14, 1856, George Little, the chief cashier of Broadstone railway terminus was found dead on the floor of his office, lying in a pool of his own blood. Pictured, ‘The Murder of Mr Little’ woodcut, from Illustrated Police News, 1882 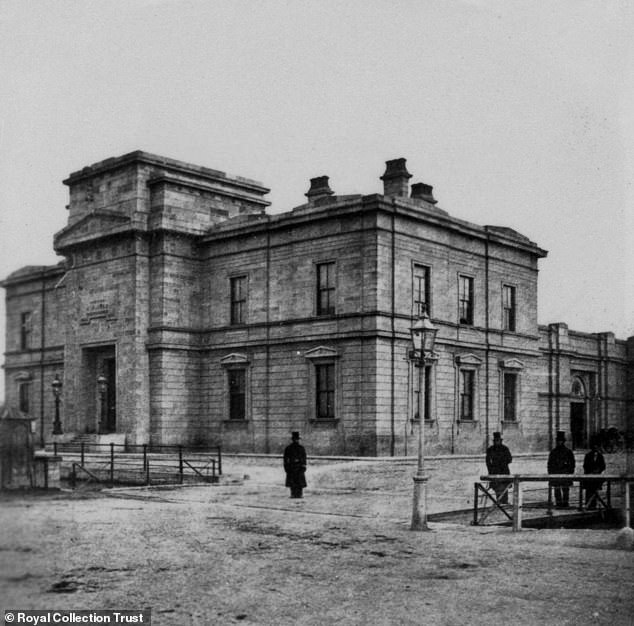 MURDER WEAPONS FOUND: Dublin’s Broadstone Terminus as it appeared in 1860, showing the pontoon bridge over the Royal Canal. The first breakthrough in the case came when police officers drained the canal and found a hammer and a cutthroat razor in the mud 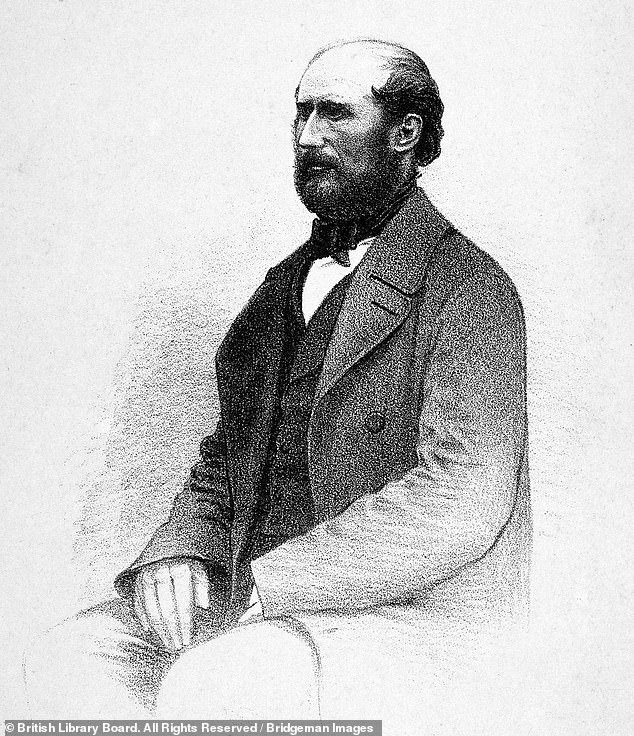 SUSPECT: Any hope of finding the man responsible for Mr Little’s murder had all but vanished when Mary Spollin came forward and accused her husband, James Spollin, seen above

The Broadstone murder provoked horror in the Irish capital, a place where homicide was virtually unknown.

While violent crime was commonplace in the rural areas worst hit by the Great Famine of the 1840s, the courts of Dublin had not convicted a single murderer in 15 years. The public wanted this perpetrator of this outrage caught, and quickly.

But they were to be disappointed. The investigation into the death of George Little would turn out to be the most complex and difficult in the history of the Dublin Metropolitan Police.

It went badly from the outset.

Inquiries only got underway after the conclusion of the inquest – a day after the discovery of the body and, as it turned out, more than 36 hours after the cashier’s death.

Dozens of people, from railway employees to curious members of the public, had trampled all over the crime scene, destroying any possible forensic evidence.

The detective appointed to lead the inquiry, Superintendent Augustus Guy, learned that George Little had been working late on the day he was killed, staying in his office long after the other company officials had gone home. 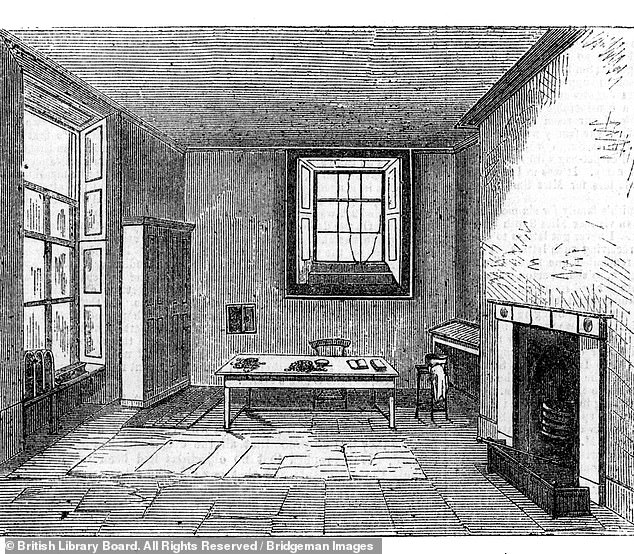 SCENE OF THE CRIME: A contemporary engraving of George Little’s office, the scene of his murder. Source: Illustrated Times, Saturday 11 July 1857

The railway had been particularly busy that week, with thousands of passengers travelling to the annual horse fair at Mullingar, so there was an unusually large amount of cash for George to count.

When the piles of notes and coins remaining on his desk were tallied and compared with the accounts in his ledger it emerged that more than £330 was missing – a fortune for most Dubliners, more than ten times what a labourer would earn in a year.

Superintendent Guy decided to interview everybody who had been in the building that day, more than 40 railway employees.

When I began to research the story of the Broadstone murder, I was astonished to discover that the transcripts of these interviews have survived in the National Archives of Ireland – giving a unique insight into the workings of a Victorian murder investigation.

Among other things, these documents reveal that the detectives were not short of suspects.

Several of those interviewed had secrets to hide, and lied about their whereabouts on the night of the murder. 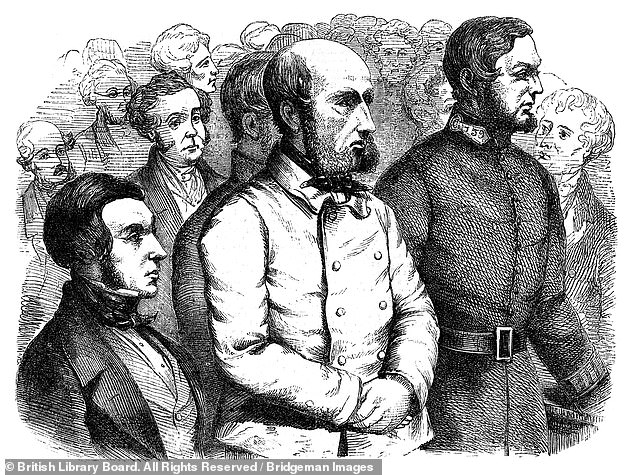 ON TRIAL: Spollin, in his first public appearance since his arrest, hears the charges against him at the police court. Source: Illustrated Times, Saturday 11 July 1857. He was later acquitted

A letter written by Thomas Kemmis, a government lawyer attached to the investigation, names no fewer than 14 persons of interest – railway employees whose evidence was inconsistent, or gave grounds for suspicion.

While the detectives questioned the staff, an army of uniformed officers scoured the station for clues. The scale of these searches was extraordinary. According to contemporary newspaper reports, the policemen dismantled entire locomotives, and even removed a corpse from its coffin, in their unsuccessful hunt for the missing money.

The first breakthrough came when they drained the Royal Canal, which ran outside the station. Embedded in the mud were a hammer and a cutthroat razor – almost certainly the murder weapons.

The plot of this real-life murder mystery had as many twists and turns as an Agatha Christie whodunit.

One after another, five suspects were arrested and then released, the detectives unable to prove their guilt.

Any remaining hopes of catching the killer had more or less evaporated when a local woman came forward and told detectives that she knew the identity of the killer.

Newspaper readers were so gripped by the drama that when the trial was published in book form it became an overnight bestseller. But the man accused of the crime, James Spollin, was eventually found not guilty. Whoever had killed George Little was still at large, and in all probability walking the streets of Dublin.

But there was one person who was convinced that he could prove the identity of the killer, using a revolutionary new scientific method that would leave no room for doubt. His name was Frederick Bridges, and he was a phrenologist.

Phrenology was a discipline which became enormously popular for a period in the nineteenth century. Phrenologists believed that the shape of a person’s brain gave an indication of their personality and talents. They claimed that simply by examining a client’s head, by feeling the pattern of bumps and ridges unique to each skull, they could provide a detailed account of an individual’s mental abilities and character.

Bridges wanted to apply this expertise to policing. He was sure that there must be something distinctive about a murderer’s brain, something that differentiated them from the law-abiding majority.

If so, the consequences for criminal investigation were momentous.

Bridges predicted that one day detectives would not need to conduct expensive murder inquiries, or laboriously gather evidence. Instead they would pass any suspects over to a phrenologist, who would examine their skulls and thereby identify the killer.

And why stop there? Bridges foresaw a world where people would be routinely screened for their phrenological characteristics, and those recognised as potential murderers pre-emptively imprisoned for the protection of society. It was a vision of the future much like that depicted in the Spielberg thriller Minority Report, in which would-be criminals are arrested before they have even committed any crime. 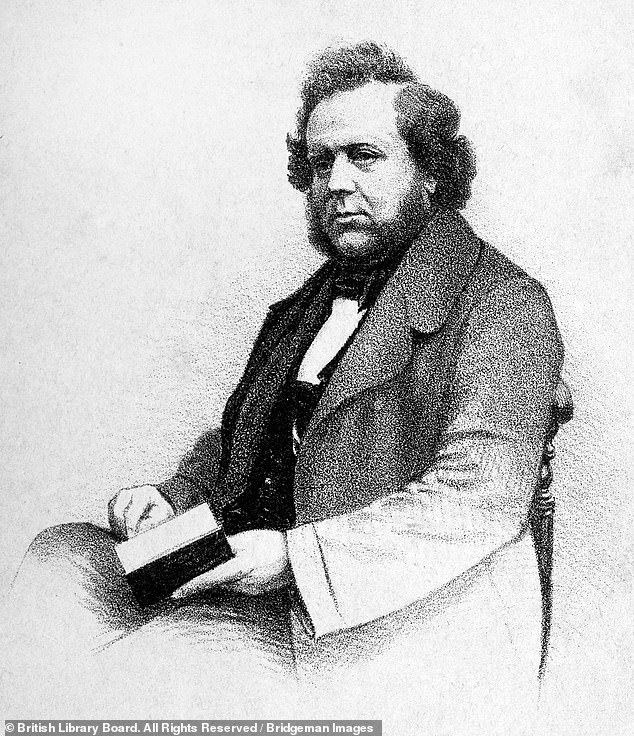 NEW THEORY: Frederick Bridges, pictured, was convinced that he could prove the identity of the killer, using a revolutionary new scientific method called phrenology. Phrenologists believed that the shape of a person’s brain gave an indication of their personality and talents

Frederick Bridges spent years developing his theory. To gather data on the skull dimensions of murderers he attended public executions all over the country. Once the criminal’s body had been taken down from the gallows he would shave the dead man’s head and then make a plaster cast of it for later study.

After collecting dozens of these plaster heads, Bridges believed he had identified a physical feature unique to violent criminals. It was a simple measurement: the angle between a person’s ear and their eyebrow. In normal law-abiding folk, this angle was around 25 degrees. But in murderers the angle was always much larger, between 35 and 45 degrees – or so Bridges claimed.

So when James Spollin, the man accused of the Dublin Railway Murder, was acquitted, Frederick Bridges saw an opportunity.

If he could only meet him and examine his skull, he would soon be able to clear up the question of whether Spollin was indeed the railway murderer. As luck would have it, a few months later Spollin turned up in Bridges’ hometown of Liverpool.

The Dubliner had travelled to the port because he wanted to emigrate to America – but he was virtually destitute, and could not afford the transatlantic fare.

For Bridges, this was too good a chance to miss. He succeeded in arranging an introduction to the notorious Irishman, and over the course of several weeks befriended him. 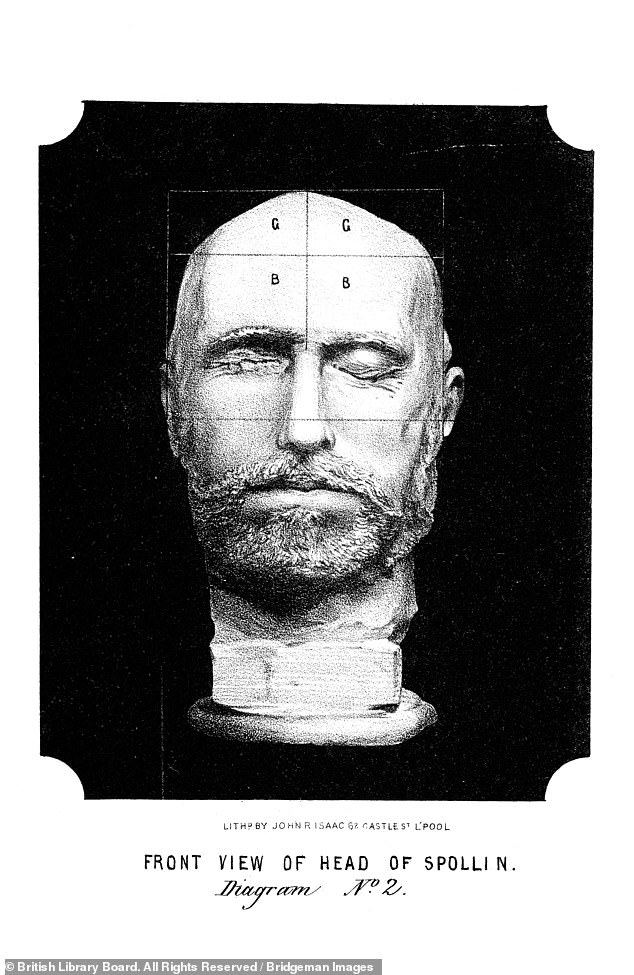 STUDY: Bridges took a plaster cast of James Spollins’s head, pictured. A cursory examination of Spollin’s skull was enough to convince the phrenologist that the man was a murderer

A cursory examination of Spollin’s skull was enough to convince the phrenologist that the man in front of him was a murderer. Bridges was so sure of his conclusions that he immediately wrote to the home secretary, Sir George Grey, warning him that ‘the configuration of [Spollin’s] head is of a most dangerous type. It is not prudent to allow such a man to be at large in this country.’

Bridges never received a reply to this peculiar letter: it seems that the home secretary was sceptical of the notion that it was possible to identify a murderer from the shape of their head.

But others at the very top of government were more receptive to his ideas. Not long afterwards, Frederick Bridges was invited to a meeting with Viscount Palmerston, who had just resigned as prime minister.

Palmerston was fascinated by phrenology. He was keen to learn about Bridges’ technique, and discuss how it might be applied to the criminal justice system. Bridges was given the honour of a lengthy private audience, at the end of which he was permitted to examine the great man’s head.

There are grounds for thinking that Palmerston even wanted to make phrenology an integral part of modern policing.

When he returned as prime minister in 1859 he made a special grant to Frederick Bridges of £50 to fund his research. But for one reason or another, his eccentric theories never found their way into the mainstream.

By the late 1850s, phrenology was a largely discredited science; perhaps younger, savvier members of the government persuaded Palmerston to drop the idea.

As for James Spollin, the prime suspect for the Dublin Railway Murder slipped quietly away to a new life on the other side of the world, his fare paid by Frederick Bridges.

Today we know that the shape of Spollin’s head had nothing to do with whether he was a murderer. But his case nearly transformed policing – and in a very strange way indeed.