Are middle class people becoming RUDER? Mother sparks debate online after claiming her friend became ‘entitled’ and developed a ‘cold sense of smugness’ after moving to a posh area

A woman has started a heated online debate after questioning whether middle class people in the UK are becoming ruder.

The unnamed woman took to Mumsnet to reveal that one of her close friends has grown ‘entitled’ and developed a ‘cold sense of smugness’ since moving to a posh area, and asked whether it’s a common theme.

She was met with mixed reactions as some agreed that people  who are more well off tend to have worse manners.

Others said people can be rude no matter their background, and that being impolite is not a class issue, but rather down to how people are raised by their parents. 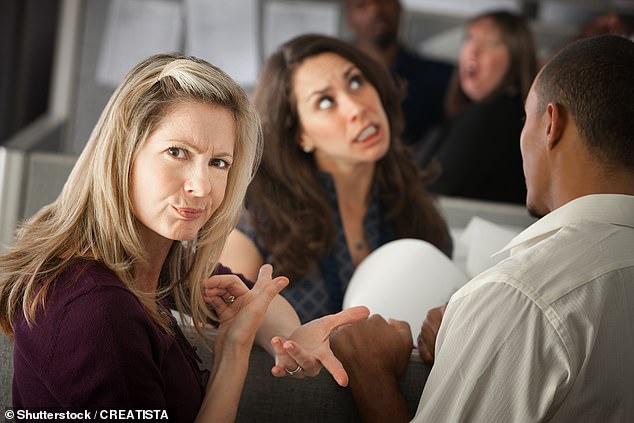 An unnamed woman took to Mumsnet to reveal that one of her close friends has grown ‘rude’ and ‘entitled’ since moving to a posh area, and asked whether it’s a common theme (stock image) 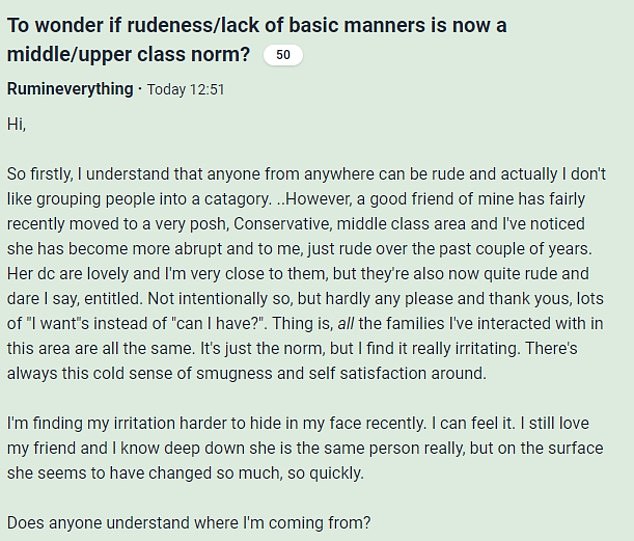 The woman explained that even her friend’s children seem more ‘entitled’ since they moved to a ‘Conservative, middle class’ area

The mother explained how she’s noticed a change in her friend’s behaviour since she moved house.

‘A good friend of mine has fairly recently moved to a very posh, Conservative, middle class area,’ she explained.

‘And I’ve noticed she has become more abrupt and to me, just rude over the past couple of years. Her children are lovely and I’m very close to them, but they’re also now quite rude and dare I say, entitled.

Not intentionally so, but hardly any please and thank yous, lots of “I want”s instead of “can I have?”. Thing is, all the families I’ve interacted with in this area are all the same.

‘It’s just the norm, but I find it really irritating. There’s always this cold sense of smugness and self-satisfaction around.’

‘I think generally in the UK manners have declined and entitlement has increased, but across all classes, not just middle/upper,’ one Mumsnet user replied.

ANother echoed her sentiment, saying: ‘I think there’s been a general decline in manners across the board, driven by an increased sense of entitlement. When a lot of people are challenged or encounter a problem, their default setting seems to be hyper-aggression or utterly self-absorbed sense of outrage.’

But another agreed with her point saying: ‘I understand what you mean. The “nicer” an area is ( or perceived to be ) the people seem more entitled and a bit stuck up. Look down on people,’ another wrote. 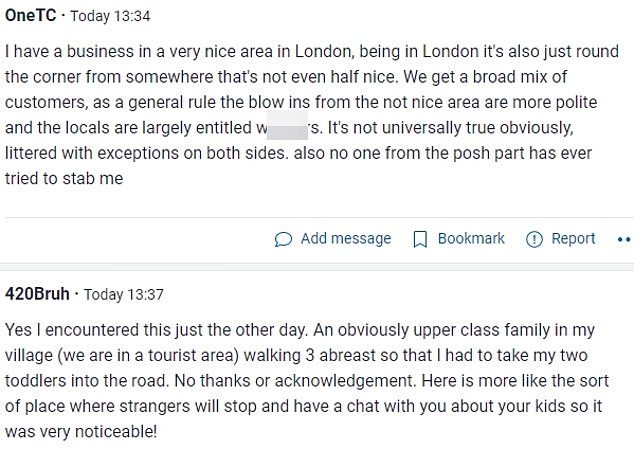 People rushed to share their comments, arguing that there is a sense of rudeness among the middle classes, claiming they don’t say thank you for polite gestures and that their children are ‘entitled too

A fellow commenter added that her daughter is a horse riding teacher in a ‘middle class/second home seaside town’.

‘It is mostly the middle classes who are rude and demanding,’ she said. ‘One wealthy local business owner rang my daughter at 22.10 last Saturday night to book lessons for her little darlings.

‘Plenty turn up late, cancel within the hour of a lesson, turn up late to pick up their kids, expect little Polly to be galloping along the beach on her first lesson.

‘She says the less well off families/kids are generally better behaved and listen to instructions.’

A fellow poster chimed in with a similar story, saying they have a business in a ‘very nice area of London’.

‘Being in London it’s also just round the corner from somewhere that’s not even half nice,’ she said. ‘We get a broad mix of customers, as a general rule the blow ins from the not nice area are more polite and the locals are largely entitled w***ers.’

Interestingly, one Mumsnet user said that she knows of an academic who was investigating this very subject after observing increased middle class rudeness.

‘His contention was that this generation was under more pressure to compete. At work so many of us have targets and appraisals,’ she said. ‘We work longer hours and irregular hours. Meetings are more difficult to get to because of traffic congestion and lack of parking.

‘Children want more “things” and want to do more activities, riding, paddle-boarding and so on. The list goes on. 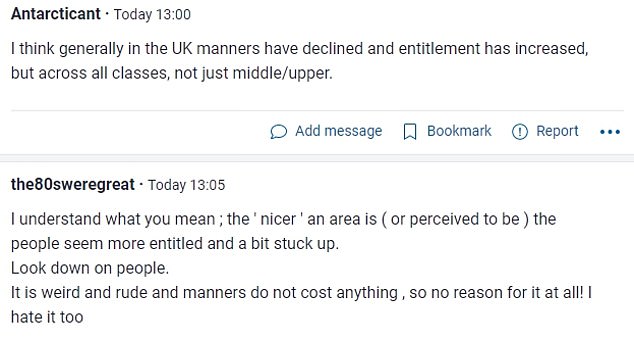 Some claimed that those who are genuinely ‘posh’ don’t look down on others, while fellow commenters argued that there’s been a general decline in manners and it’s nothing to do with class

‘We therefore become impatient because we are obstructed from completing our personal targets.’

In a strongly-worded post, another wrote that ‘on the whole, the middle class baby boomers and their entitled brats are without doubt the rudest people that ever walked the earth’.

‘I have often been extremely polite and stepped off the pavement for a family or held a door open for someone or let someone go in front of me in a queue, and I have not got an acknowledgment that I’m a living human being, let alone a thank you,’ another added. ‘Since I am quite petty however I find calling them out with a loud ‘You’re welcome’ gives them a sense of embarrassment – especially because I have a a real middle class vibe and voice myself.’

Other commenters added that those who are genuinely well off and could afford to be snobby seldom are.

Another added: ‘This is true. All of the genuinely posh, “old money” types I’ve met have been unfailing respectful and polite.’