Model, 27, reveals she suffered horrific burns and scars after she accidentally dropped a bottle of tanning oil in a garden fire – which then exploded

A glamour model has revealed how she suffered horror burns after a bottle of tanning oil exploded.

Kym Graham, 27, told how her skin and hair were torched in the freak accident at her Heaton home.

The model, who regularly poses for The Sun’s Page 3, mistakenly dropped the bottle in a garden fire.

‘All I could see was a ball of fire come towards me then before I knew it my hair was on fire,’ she recalled.

Despite fears she could be scarred for lift, Kym hopes to make a full recovery. 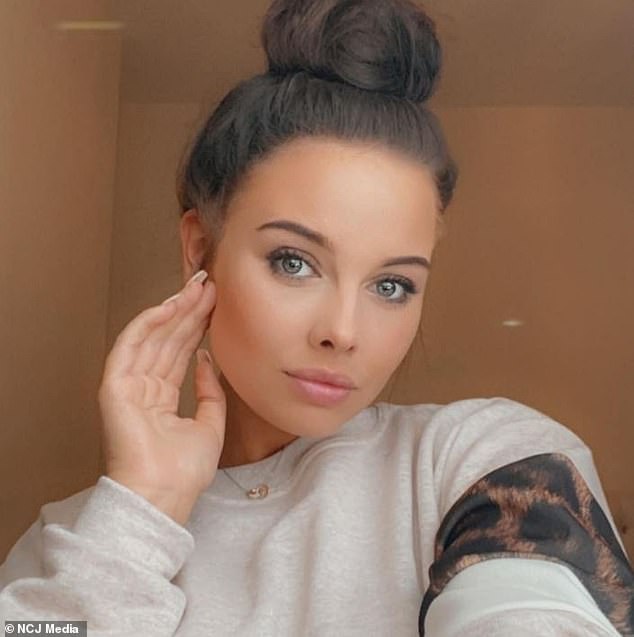 Model Kym Graham (pictured), 27, from Heaton, told how her skin and hair was torched in a freak accident when her tanning oil bottle exploded

Kym (pictured after the freak accident) explained she accidentally dropped the bottle of tanning oil in a garden fire, and the content exploded, hitting her arm

However, doctors say she can’t expose her skin to sunlight – or sunbeds – for over a year.

‘Considering my job, that isn’t ideal, but I’ve had a lucky escape,’ added Kym. ‘But I’d never experienced anything like it in my life.’

The dramatic scenes unfolded last week while the mum-of-two was burning wood.

‘I hadn’t realised that the bottle of tanning oil had gone in, and as there was still some in, it just exploded,’ she explained.

After five days, Kym’s burns had still not healed. The mother-of-two said her daughter ‘cried her little eyes out’ when she realised what had happened to her

Kym had to cover the burns on her arm with bandages and has been advised by doctors not to have any sun beds or stand in the sun for the foreseeable future. Pictured, after the accident

‘At the time I didn’t even feel any pain as I must have been in shock. I was just trying to put it out on my hair when the person I was with in the garden was tapping my arm as it was on fire.

‘I was on fire for about a minute – it was horrible.’

She was rushed to A&E where her injuries were assessed. She later shared graphic images on Facebook of her badly blistered skin.

However, the biggest pain was yet to come when she burst into tears as her young daughter, Willow, realised what had happened to her mother.

‘She just cried her little eyes out – it broke my heart,’ said Kym, who as she recovers, has issued a warning.

‘The pain I am now in is bad, I can’t even bend my arm. I can’t sleep properly, so I am just taking paracetamol and ibuprofen but it isn’t doing much.

‘You just need to thoroughly check what you are putting into a fire. I’m just so glad the kids were not there.

‘I don’t think I will ever sit around a fire again – I can’t get the image of what happened out of my head.’ 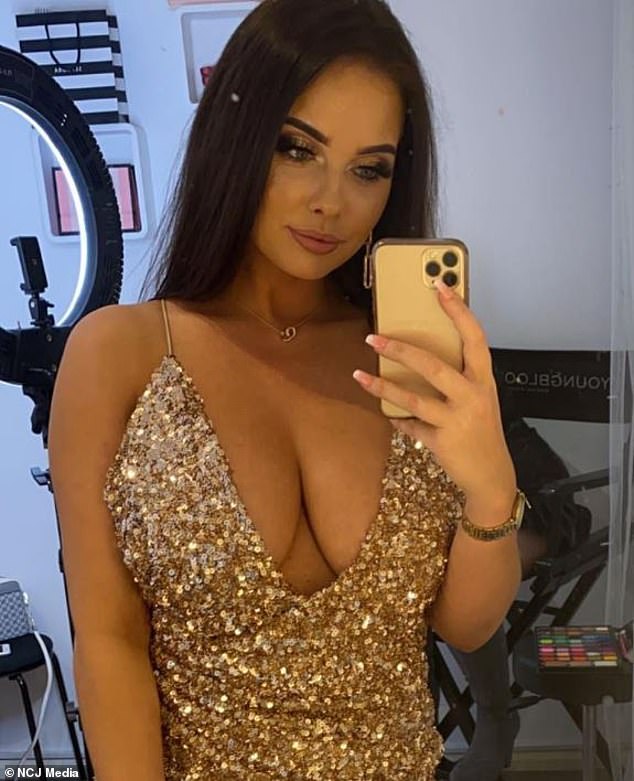 While Kym (pictured, before the accident) worried the burns would stop her from doing her job as a model, she said she knew she had been lucky