Two cash-strapped women are determined to take any job that comes their way, no matter how unqualified. That was the simple premise behind the sparkling comic debut Unqualified in 2018. And it underpins the sequel.

Life has moved on for hot-tempered Joanne (Genevieve Hegney) and sunny Felicity (Catherine Moore) since they met in Centrelink, became friends and set up a temping agency. 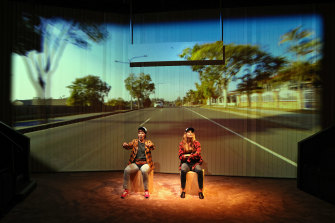 Joanne and Felicity on their climactic road trip.Credit:Prudence Upton

Now they’re flatmates and battling to get a Covid grant to sustain their shaky business enterprise. The stakes are higher: they want jobs that pay better and demand some serious skills. No matter that they don’t actually possess them.

The chalk-and-cheese duo mine the comedy as they try their hand as birthing assistants, New Age retreat facilitators, art gallery guides, gay wedding planners and, most improbably, paralegals.

What moves this beyond sketch comedy is that now there are secrets to unpack along with Felicity’s voluminous cardboard boxes of belongings.

Each inadvertently learns something vital about the other. Something the other does not know about herself. It is what each will do with this knowledge that propels the show.

A follow-up to a theatrical success poses similar challenges to a musician’s difficult second album: how to move forward without simply repeating the formula. In filling out their characters, this well-plotted play enters new territory.

Joanne and Felicity are firmly established as a convincing and dynamic comic duo: Hegney is a brittle, angry Joanne, well-matched with Moore as the warm-hearted, gregarious Felicity with a Labrador-like eagerness to please.

Both actors play a series of minor roles in this two-hander, which they also wrote. Hegney is a memorable Californian guru flogging a mix of New Age woo and merchandise, and Moore creates a tender flashback portrait of the mother Felicity never knew.

While the stand-alone sequel does not quite hit the high comic bar of part 1, the strong chemistry between the pair makes this a joy to watch.

Director Janine Watson, who directed the debut, again ensures the pace never flags in the series of short, snappy scenes.

Video projections (Darryl Wallis) are used effectively, particularly for the climactic road trip across the Nullarbor.

Ultimately, the women learn the hardest job of all is to remain friends in the face of life’s messiness. This upbeat, light-hearted sequel also raises questions about the nature of family. What constitutes family does not fit neat dictionary definitions.

As their splendid and sparkly Pat Banatar finale has it, “we belong to each other”.