A little help from her friends! Meghan Markle’s closest pals turn out to show support on her special day, as Jessica Mulroney and Benita Litt lead the way, along with their adorable children

Meghan Markle wowed the world with her confidence and poise as she stepped into St. George’s Chapel to marry Prince Harry on Saturday.

But although the actress, 36, looked every inch the confident and independent bride, she was no doubt incredibly grateful to know that some of her closest friends were by her side to support her on her special day.

In particular, two of her best and oldest pals – Jessica Mulroney and Benita Litt – were there right up until the moment Meghan walked into the chapel, leading their own children into the ceremony to take on roles in her bridal party. 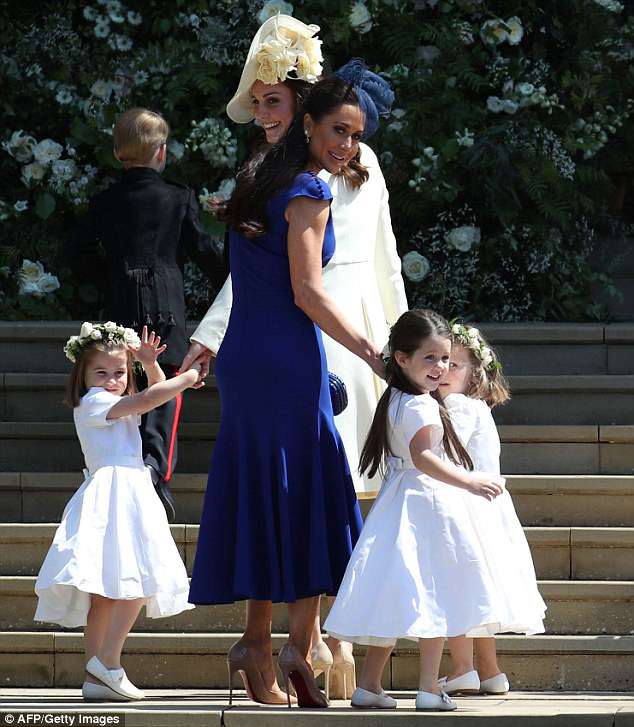 Best friends: Meghan Markle’s closest friends were by her side as she married Prince Harry on Saturday, including her long-time pal Jessica Mulroney, whose children were in the bridal party Support system: One of Meghan’s oldest friends, Benita Litt (center), was also seen guiding the young bridal party – including her own daughters – into the chapel ahead of the ceremony

Jessica’s twin sons – seven-year-old John and Brian – had the ultimate honor, joining Meghan in the car for the final leg of her journey to the chapel, and also carrying her veil down the aisle as she made her way to her future husband.

The young boys stole the show at the event, delighting the congregation with their thrilled smiles and enthusiastic energy as they made their way down the aisle behind the bride.

Meanwhile Jessica, who is the daughter-in-law of former Canadian PM Brian Mulroney, helped to guide the other page boys and bridesmaids, which included her four-year-old daughter Ivy, into the chapel alongside Kate Middleton, while her sons rode with Meghan in the car.

Wearing an elegant royal blue dress, the 38-year-old put on a chic show, accessorizing the ensemble with classic nude pumps, and – of course – a blue fascinator that was perched atop her long brown hair.

As well as being by her side on her wedding day, Jessica is also known to act as Meghan’s stylist and is believed to have been employed by her three years ago, suggesting that she may have played a part in Meghan’s choice of gown for the special day. 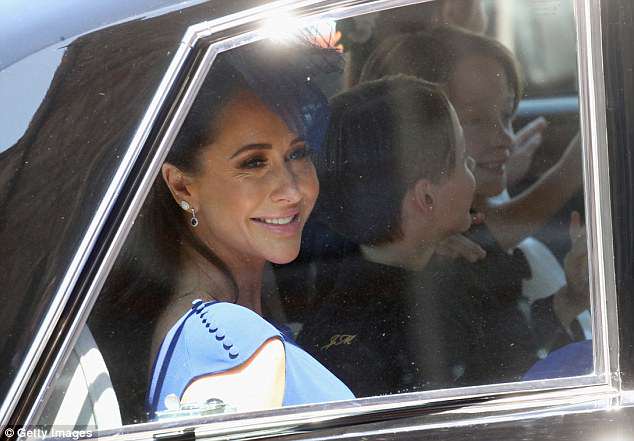 Delighted: Jessica, 38, beamed with joy as she made her way to the chapel in a car with her three children, who were all in Meghan’s bridal party 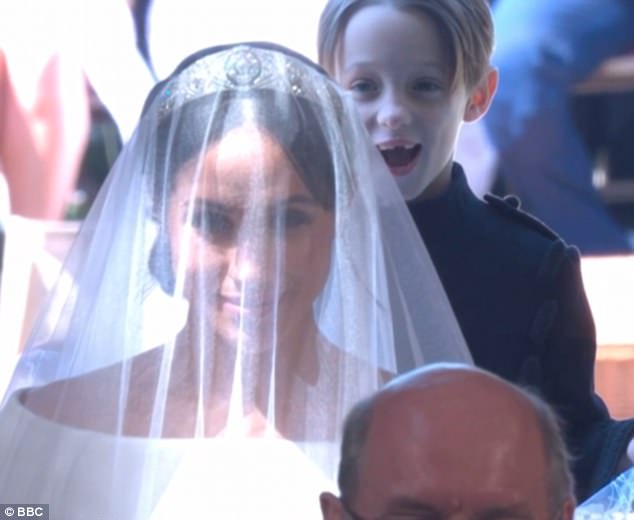 Oops! Jessica’s son John, seven, stole the show with his elated expression as he made his way into the chapel, helping to carry Meghan’s veil alongside his twin brother Brian 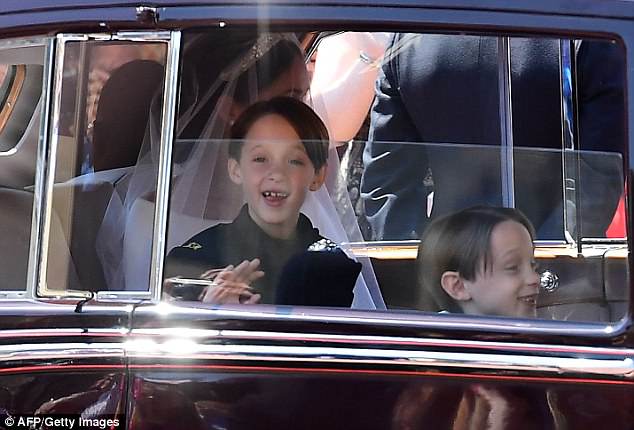 Scene stealers! The young boys couldn’t have looked happier about joining the bride for the final leg of her journey to the chapel

Meghan grew close to stylist Jessica while filming Suits in Toronto, with the pair enjoying a holiday to Italy together back in 2016.

Alongside Jessica and the Duchess of Cambridge, Benita was also there to help lead the young bridal party into the chapel.

Wearing a chic dusty pink dress, Benita, who runs her own brand agency in Venice Beach, California, added some bling to her look with a pair of silver Christian Louboutin heels and a pretty fascinator that had a slight metallic sheen to it.

Benita is one of Meghan’s closest friends with the former actress acting as godmother to her daughters, Rylan, seven, and Remi, six, both of whom were bridesmaids during the ceremony, looking adorable in their white dresses and sweet floral headbands as they walked into the chapel holding their mother’s hand. 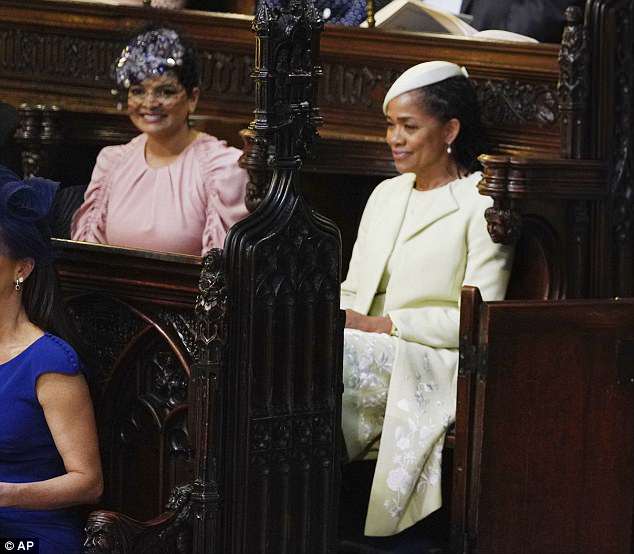 Special spot: Benita was given the honor of sitting next to Meghan’s mother Doria Ragland (right), while Jessica was seated in the row in front of them Bright and bold! Meghan’s friend and fellow actress Janina Gavankar wore a trendy orange dress with a chic cape detail. She paired it with a contrasting navy blue hat 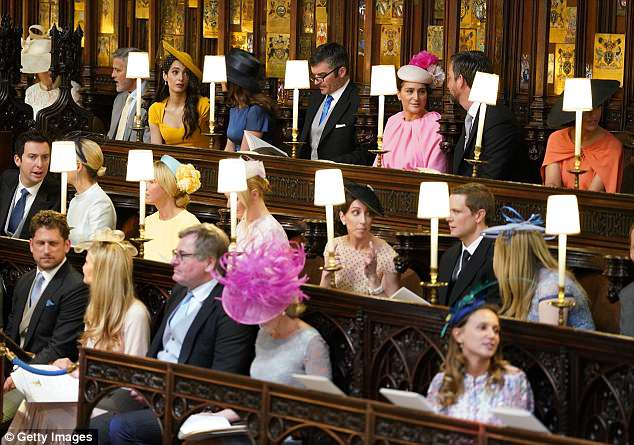 Spot the pal! Janina stood out from the crowd in her orange dress; she was seated next to the bride’s long-time pal Markus Anderson, who Meghan described as one of her ‘closest’ friends

Also spotted in the congregation at the royal wedding was Janina Gavankar, another incredibly close friend of Meghan’s, who looked radiant in a bold orange dress that had a quirky cape detail draped around the shoulders.

Rather than opt for matching headwear, Janina, 37, wore a contrasting navy blue hat that made quite the statement and helped her chic ensemble to stand out from the crowd.

Fellow actress Janina, who is best known for her role as Iden Versio in Star Wars Battlefront II, as well as supporting roles in True Blood and the Vampire Diaries, met Meghan 15 years ago and the pair have been close ever since.

Meghan has clearly had a big impact on Janina’s life having inspired her pal to launch her very own lifestyle website, altfound, after she dissolved her own site, The Tig, in April of last year, not long after she and Harry went public with their relationship.

Sitting nearby Janina in the congregation was Markus Anderson, who was initially believed to have been the matchmaker responsible for setting up Harry and Meghan in the first place – although this was later revealed to have been their mutual friend, designer Misha Nonoo. 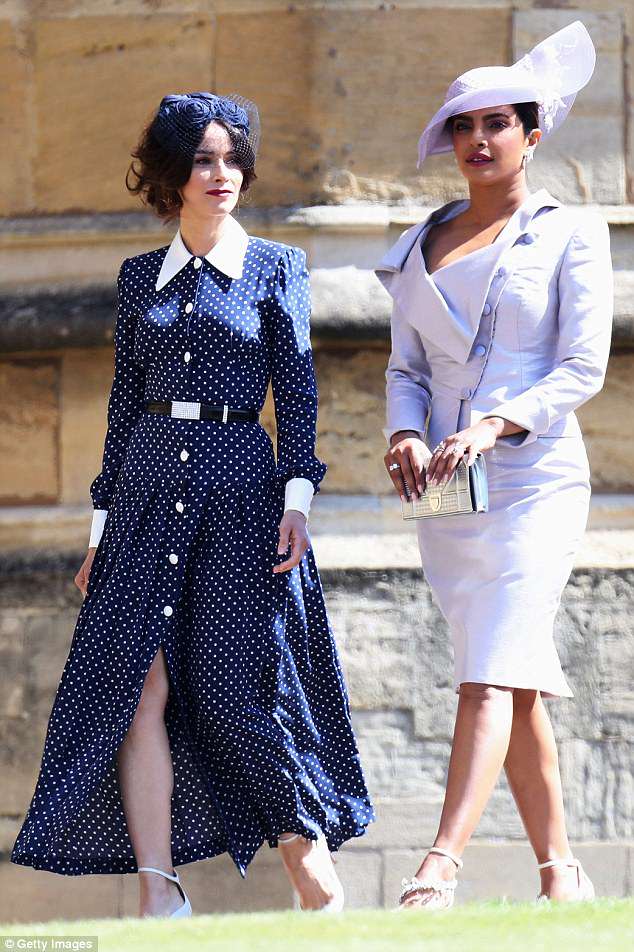 Wow!: Priyanka Chopra (right) and Abigail Spencer (left) put on an elegant display as they turned out to watch their close friend marry Prince Harry on Saturday

Markus, who looked dapper in a traditional morning suit, has been described by Meghan as ‘one of her closest friends in the world’ and the bride was no doubt thrilled to have him by her side on her special day.

The consultant for the Soho House Group and former global membership director at the exclusive club worked his way up from being a waiter.

He has known Meghan a long time and several photos of them together have appeared on social media. He grew up in Ontario and moved to London aged 19, where he began work at Soho House before moving back to Canada to open a branch of the private members’ club in Toronto — where Meghan lived after landing her role on the TV legal drama Suits in 2011.

And the show also played a huge role in Meghan’s special day; several of her former castmembers were in attendance, including her on-set ‘sister wife’ Sarah Rafferty, who put on an incredibly elegant show in her navy blue dress, which featured chic bell sleeves.

The 45-year-old actress topped off the look with a small hat, that had a navy veil hanging down over her face.

Rounding out Meghan’s circle of close friends were the likes of tennis ace Serena Williams, and actresses Priyanka Chopra and Abigail Spencer.