Meghan Markle and Kate Middleton might be following in the footsteps of Princess Diana and Sarah Ferguson, an expert has claimed.

Podcast “Royals”, from Australian magazine New Idea, heard from royal expert Angela Mollard, who said: “It does feel very much to me that we’re re-entering the Fergie-Diana years.

“At first they were great mates. Within months, and Diana chronicled this, they became less friendly to the point of animosity.

“I hope that doesn’t happen here, but it does feel little bit like history is repeating itself.”

Meghan Markle and Kate Middleton: Are they like Sarah Ferguson and Princess Diana?

Ms Mollard continued: “The only difference is, Fergie and Diana were both very, very young.”

However, a body language expert has explained why Meghan and Kate will never be like Diana and Fergie who were “always more than just sisters-in-law”.

Judi James claims that while Meghan and Kate may not be as close as Diana and Fergie once were, this might save another royal fall out.

Although the two women might seem alike in someways, the expert claims it would be foolish to start making predictions when it comes to the Duchesses.

Judi James told Express.co.uk: “If we pick up on some superficial similarities between the narratives of Meghan and Kate and Fergie and Diana it’s easy to start predicting similar outcomes, but we would be guilty of what’s called the Attribution Bias: focusing on any small similarities in traits and behaviours and ignoring the massive differences that exist.”

In fact, Judi claims that the men in the family mimic the relationship between Diana and the Duchess of York better.

“If anything I would be tempted to see stronger comparisons between Fergie and Diana and Harry and William’s relationship arcs, “ she said.

“Like the brothers, Diana and Fergie had intensely strong, long-term bonds and this historic sibling-style closeness can easily lead to deeper, less manageable rifts if there is a falling-out.”

The Princess of Wales and Duchess of York’s body language was much closer that Meghan and Kate’s.

Judi said: “Fergie and Diana show the intensity of their relationship via their proximity.

“The pair are virtually leaning onto each other, which is a trait usually seen in sisters and very close friends with high levels of trust and empathy. 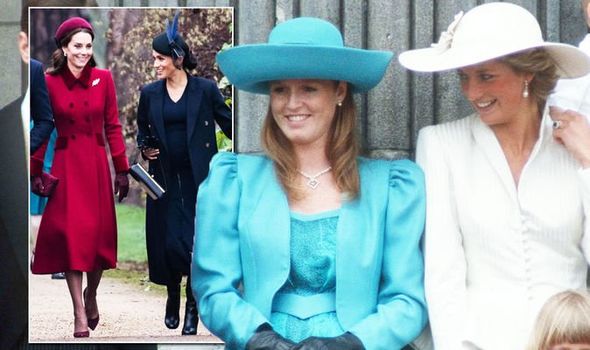 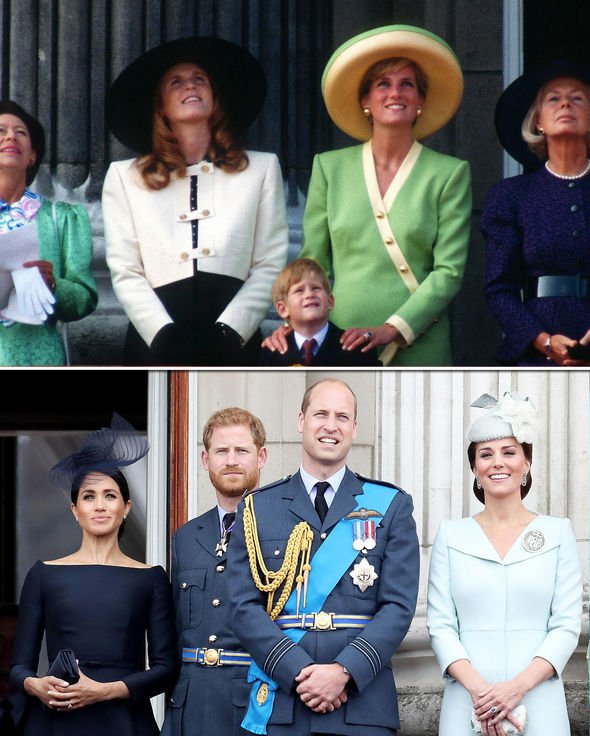 “Fergie’s grin looks naughty but less so than Diana’s facial expression. Turning her head towards her friend she raises one hand and lowers her head to suggest confiding, while her smile suggests she’s whispering a joke.”

There is a key reason why there is a difference between the two women.

Diana and Fergie were friends long before they married royal men. In fact, it was Princess Diana who introduced Fergie to Prince Andrew.

On the other hand, Judi explains: “Meghan and Kate met later in life while Kate was at her strongest in terms of maturity and power in the royal family.

“Unlike Diana, Kate has always been a very cautious royal rule-keeper who is emerging as the new matriarch in the family thanks to the Queen’s age and Camilla’s low profile. Meghan has also worked hard to be an integral member of and asset to the royal firm.” 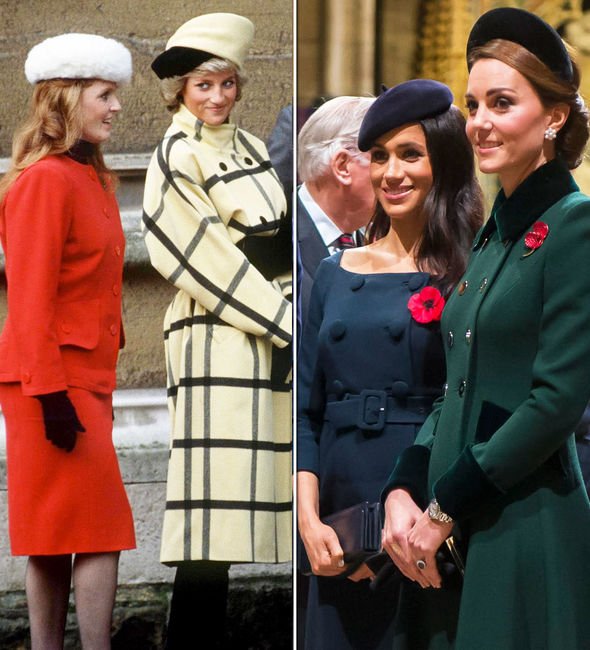 However, this does not necessarily mean things will not be cordial between Kate and Meghan.

“Because there were no signals of intense friendship ties between Kate and Meghan before rumours of a rift it will be easier for them to display signals of polite friendliness in public,” Judi said.

“Diana was said to have cut Fergie off completely but Kate and Meghan have shown no obvious signs of anything other than friendship in public.

“Standing together smiling here they don’t bring the frost to this pose, that seems to be provided by the air of tension settling around their unsmiling husbands.”

Kate Middleton wore a navy blue polka dot dress yesterday, but did she copy it from Meghan’s wedding?

The royal line of succession – who outranks who?

The line of succession to the British throne dictates the order in which each member of the Royal Family would ascend to the throne.

It is also seen as a ranking of importance with the head of the line, the Queen, taking the place of ruler.

Older children come before younger children. Traditionally boys came before girls, but this law was changed on 26 March 2015 before the birth of Prince William’s first child.

Incredibly, Catholics are still excluded from the line of succession, as are children born outside of wedlock.

The royals, who usually stick to a strict protocol when appearing in public, often arrive at events in ascending order of importance, with the most important royal arriving last.

Prince Charles, 70, is currently second-in-line to the British throne, followed by Prince William, 37, his oldest son.

Prince Harry and Meghan Markle’s child, Archie, comes next when they are born.