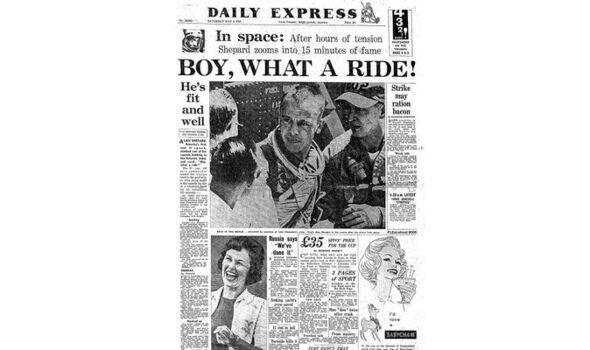 The US Navy Commander was propelled 115 miles above the Earth at 5,100 miles an hour in his Mercury 3 capsule, before landing safely in the Atlantic 15 minutes later. His journey came three weeks after Russian cosmonaut Yuri Gagarin made history as the first human to leave the earth’s atmosphere.

68 years ago (1954) Oxford medical student Roger Bannister became the first man to run a mile in under four minutes.

His record-breaking time of three minutes 59.4 seconds was watched by 3,000 spectators at the city’s Iffley Road track and although it stood for just 46 days, he is remembered as the man who ran the “Miracle Mile”.

28 years ago (1994) The Channel Tunnel was formally opened with ceremonies in Britain and France attended by the Queen and French President Francois Mitterrand.

At its lowest point the 31-mile tunnel is 250 feet below the seabed and, at 23 miles, it has the longest underwater section of any tunnel in the world.