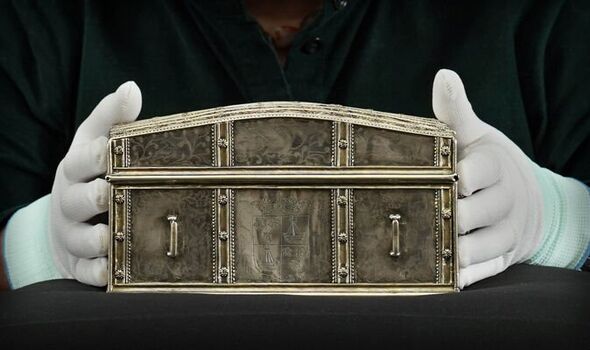 It was acquired for £1.8million by National Museums Scotland from Lennoxlove House Ltd, a private owner since the mid-20th century. Museums director Dr Chris Breward said: “This casket is truly one of Scotland’s national treasures. Venerated as a relic of Mary, it is believed to represent a momentous and disastrous moment in her turbulent life.”

Mary, Queen of Scots was beheaded in 1587 for her alleged involvement in a plot to murder cousin Elizabeth I.

Such a casket was produced at a hearing ordered by Elizabeth against Mary in December 1568.

It contained what became known as the Casket Letters. The love poems and notes, allegedly from Mary to her third husband, the Earl of Bothwell, implicated the pair in a conspiracy to murder her second husband Lord Darnley. Mary later became the focus of various English and Spanish Catholic plots to overthrow Protestant Elizabeth.

Made in Paris between 1493 and 1510, the casket was said to be given to Mary by her first husband Francis II of France. It is an early example of French silver, very little of which survives even in France.

The casket – put on display by principal curator Dr Anna Groundwater at the National Museum of Scotland in Edinburgh yesterday – was owned by the family of the Dukes of Hamilton for three centuries after acquisition in around 1674 by Anne, 3rd Duchess of Hamilton.

It was bought on the understan-ding it belonged to Mary, according to a handwritten note stored with it from the late 17th century.