Married mom is branded ‘a narcissistic psycho’ after revealing she is looking for a man to have an affair with, while brazenly admitting she cheats on her ‘great’ husband ‘every few years’ because he fails to satisfy her in bed

A married mother-of-one is opening up about her numerous infidelities — and how hard it is to find a partner to have an affair with during the pandemic.

The anonymous 38-year-old woman got candid about her sex life with The Cut this week, admitting that she loves her husband but hardly ever orgasms with him.

Over the years, she said, she has cheated on several occasions — but since they moved from Brooklyn, New York to a small town in Vermont, she’s wondering how she’ll find someone else to sleep with. 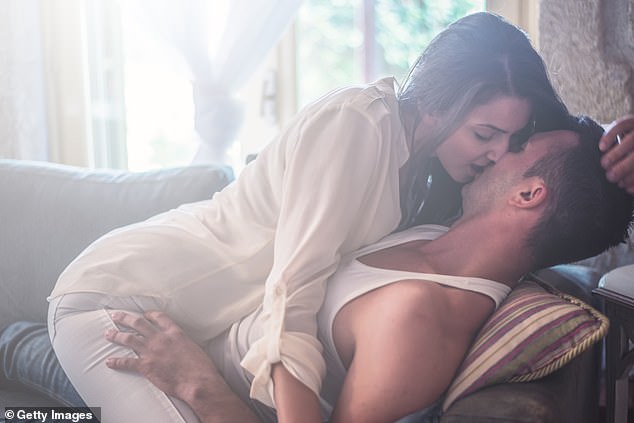 Selfish: A married mother-of-one is opening up about her numerous infidelities — and how hard it is to find a partner to have an affair with during the pandemic (stock image)

The married mother shared the shocking details in The Cut’s Sex Diaries column this week, not long after she, her husband, and their five-year-old daughter moved to new England.

She said they both lost their jobs in the pandemic and decided on a change of scenery — which has also been a boost to their sex life.

‘My husband and I used to have sex once every few weeks, mostly out of sheer exhaustion at night,’ she said. ‘Now we’re having sex every other night or so.’

While she enjoys it, she said she fakes ‘every orgasm’.

‘He’s a great husband and I love him and I don’t want to hurt his feelings by letting him know I’m not sexually satisfied. It’s that simple,’ she said.

Whatever the cause for their lackluster sex, the woman has supplements it with extramarital affairs.

‘Every few years, I like to have an affair,’ she said.

‘I find it really harmless. I know I’m playing with fire but it keeps me balanced,’ she went on, noting that she’s slept with other men and women. ‘My husband has no idea. Again, it’s not worth hurting him or scaring him for no reason.’

She stressed that they don’t have an open marriage, but she is ‘sure’ he’s had ‘his own situations’ while traveling for business.

Though she doesn’t seem to have any guilt about cheating on her husband, she is facing a particular struggle these days: Because of the pandemic, t’s nearly impossible to socialize,’ which makes it hard to find a new sexual partner.

She’s on the lookout, she said, keeping an eye open for ‘hotties’ when she goes to buy groceries or wine.

She said she has fantasized about finding a ‘rugged furniture maker’ to sleep with a few times, and flirted with a gay married woman at a consignment shop before making plans to meet up.

All the while, she is still having regular sex with her husband.

They even had a recent visit from her parents, who came to stay and watched their daughter while they had some alone time in their bedroom.

The woman’s story has so far earned several disapproving comments on The Cut’s website, from critics who call her ‘a narcissistic psycho,’ ‘gross,’ and ‘downright repulsive.’

‘Wow I feel bad for your husband,’ said another. ‘He probably has no clue that you’re out boning other people (I hope you get tested regularly btw).’

‘Another boring sociopath living a lie,’ commented a third. ‘It doesn’t seem at all like the biggest concern for you is getting your daughter adjusted. Your focus is finding a new f buddy.

‘Maybe use this time to communicate with your husband clearly about your needs and risk hurting him or maybe the thrill for you is betraying him.’