Californian man, 41, who has THREE wives and nine children reveals he abandoned ‘insecure’ monogamy because he ‘loves everybody’ – and describes his family as an ’empire’

A retired firefighter and former bouncer who has three wives and eight children has said that he abandoned ‘insecure’ monogamy because he ‘loves everybody’ and wanted to build a family his own way.

Jermaine Roquemore, 41, who lives with first wife Angelica, 41, second partner Leighanne, 36, and third partner Maria, 41, along with his nine children in Bakersfield, California, started his family when he was 16-years-old.

And it has just kept growing and growing since, with a current age gap of 23 years between the oldest and youngest sibling. 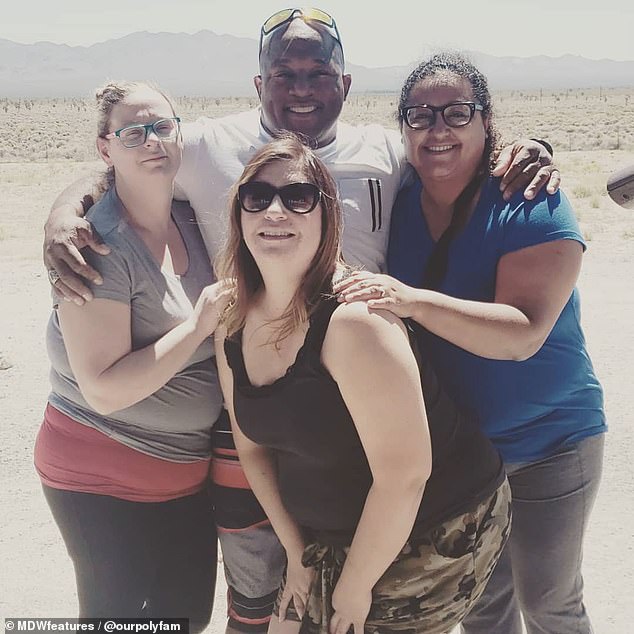 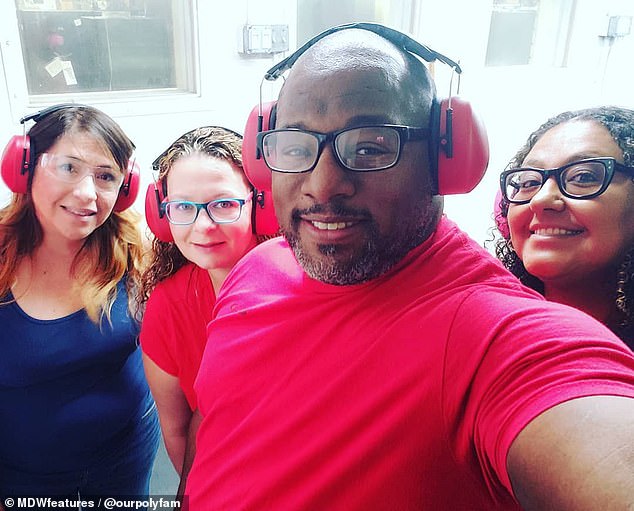 The family live together in Bakersfield, California. Jermaine said he abandoned ‘insecure’ monogamy because he ‘loves everybody’ 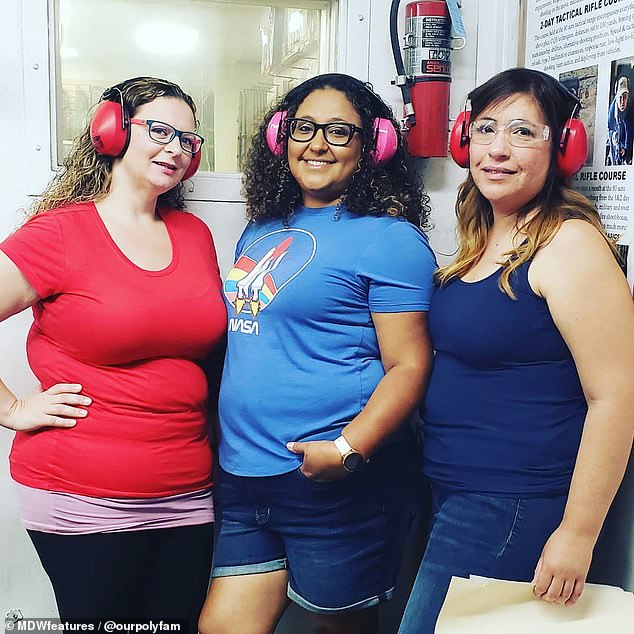 He married Angelica (centre) when they were both 19 years old. She didn’t ask him to be monogamous, but just to respect her and her well-being. Three years later his second partner Leighanne moved in with them (left) and, in 2015, Maria also joined the family (right)

‘We were taught to be monogamous and I feel like that just makes us become insecure’, he said

‘We’re told to go out there and find the one, the perfect love, the perfect mate and spend the rest of our lives on this earth with just that one person.

‘To me that was very unideal because I love everybody.

‘Polyamory has opened that door and that opportunity for us to expand our horizons.

‘But to expand it together instead of being a broken home and me having multiple partners all over the world, we combined ourselves mentally, physically, emotionally, financially and have built this empire.’ 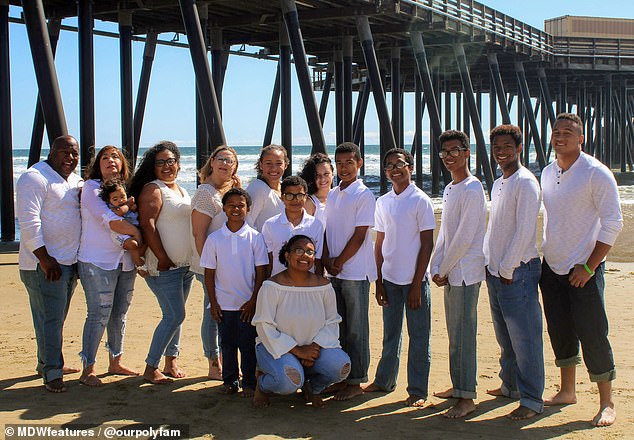 Jermaine Roquemore pictured with his three wives, his children, and other children that he supports which are outside his immediate family 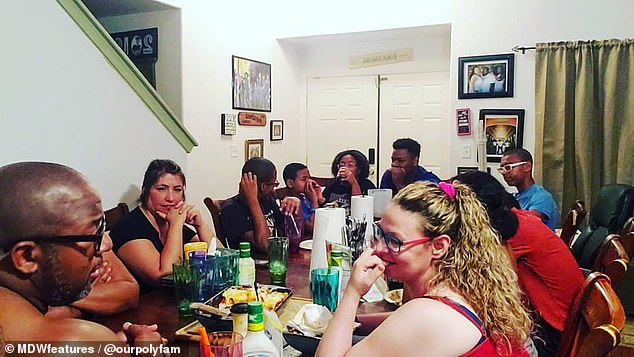 The large family spend most of their time together. Speaking about why he isn’t monogamous, Jermaine said it was ‘very unideal’ because he ‘loves everybody’ and also that it makes you become ‘more insecure’ as a person

Jermaine met his first wife, real estate worker Angelica, when they were both 19 years old. After getting married she did not demand monogamy, and asked her husband to respect her and her well-being.

Three years later he met the woman who was to become his second partner, retail manager Leighanne, 36, in an online chat room. They fell in love and in September 2001 she moved in with Jermaine and Angelica.

And, in 2015, Jermaine met his third partner, analyst Maria, 41, on a dating app. They met several times before deciding they wanted to spend the rest of their lives together. She moved in with the rest of the family.

He also has a daughter with his third partner Maria, two-year-old Amelia, and a 25-year-old son that he had when he was 15 years old. 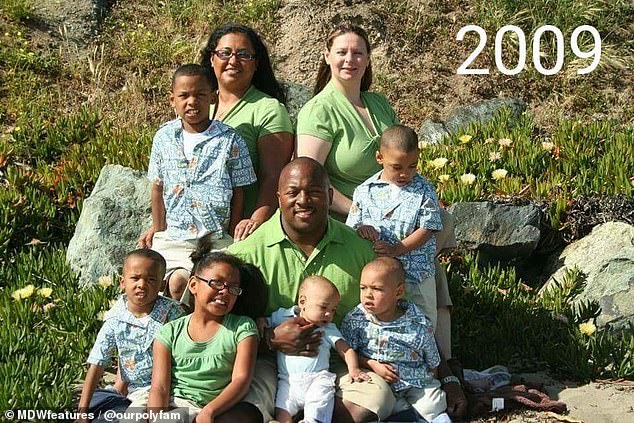 The family pictured in 2009. Angelica (left) and Leighanne (right) with their six children 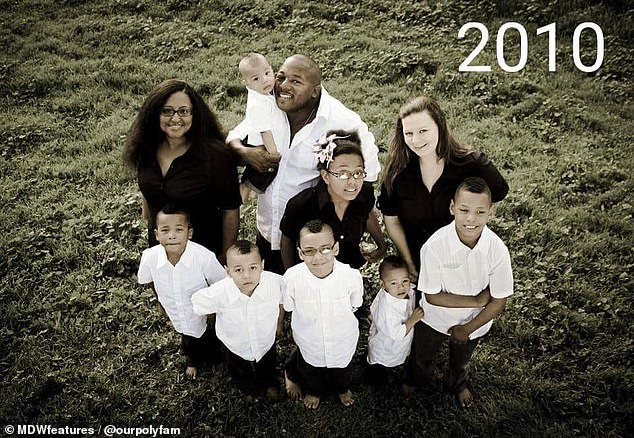 The family photographed in 2010, before Maria joined the family in 2015. Jermaine and Angelica have three children called Hennayee Janiverly, 19, Jermaine Deon, 17, and Lodum Quinton, 14 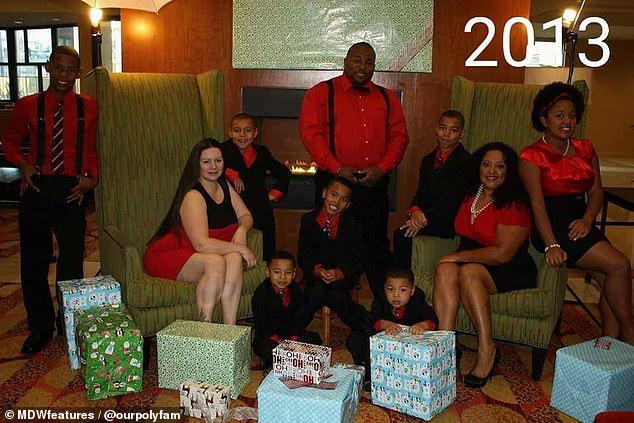 The family were photographed together here in 2013. Jermaine and Leighanne have four sons together; Braylon Lee Anthony, 15, Aniken Raz, 13, Izan Marcel, 11, and Holden Jermaine, 9 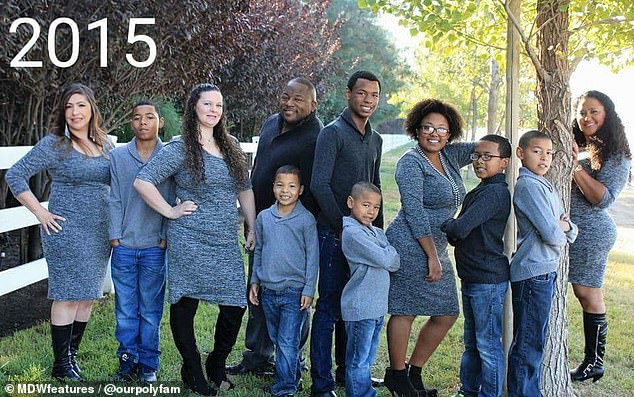 Family photographed in 2015 after Maria, 41, joined them. She met Jermaine on a dating app

‘It’s like having a team of warriors that constantly have your back and support your well-being’, he said describing what it’s like to have three wives.

‘This combination of love we built has allowed me the opportunity to love unconditionally and learn the differences it takes to emotionally, mentally and physically support each of them in their and my own way.

‘I look at these women as a piece of my body. An extension of my love. This is our normal and because we don’t live what this world calls a normal life, one husband, one wife.

‘We are doing just as fine living the way we are in this situation just as good as one on one partnership. One on three is fine with us.

‘It’s our life decision and we wouldn’t change it for this world. We used to share the same room at one time but now the adults are divided up into three rooms and I get to take turns sleeping in three different beds.’

His wives also have the option of taking another partner as well, if they would like to. 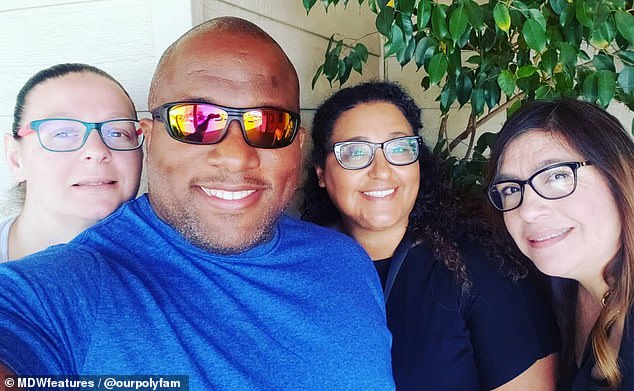 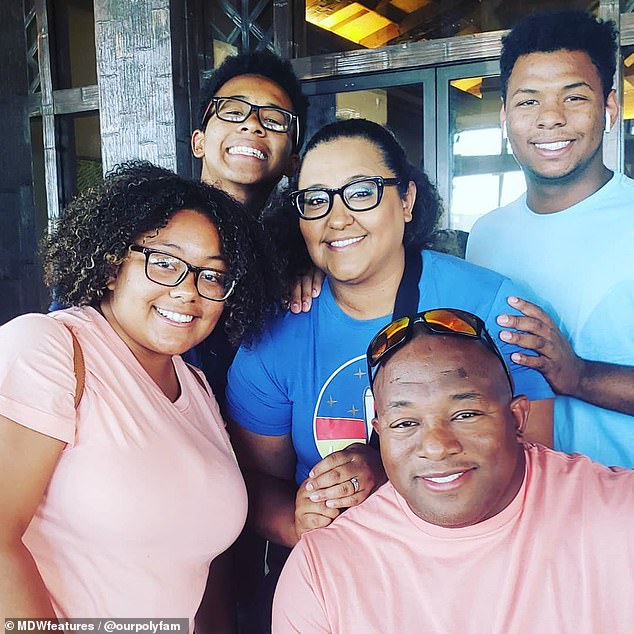 His wife Angelica said that she was not sure what she wanted in a family but, after seeing friends with large families, she felt she wanted a ‘bigger’ one.

‘Being in a polyamorous relationship means having the extra support within our household to be able to achieve what most other families cannot.

‘Our plan is to continue to build our empire and become successful along the way of teaching our children to be successful.’

The family have a strong presence on social media,  and regularly post updates for their followers.

‘Don’t judge us for who we are because this is the only life we have. If you want to love more, that’s great for us’, said Jermaine.

‘If that’s not how you want to live, we’re not going to judge you. Just allow us the opportunity to love the way we choose to love.

‘I’d rather promote healthy, happy relationships rather than cheating and lying relationships because then it turns into a tragic situation.’