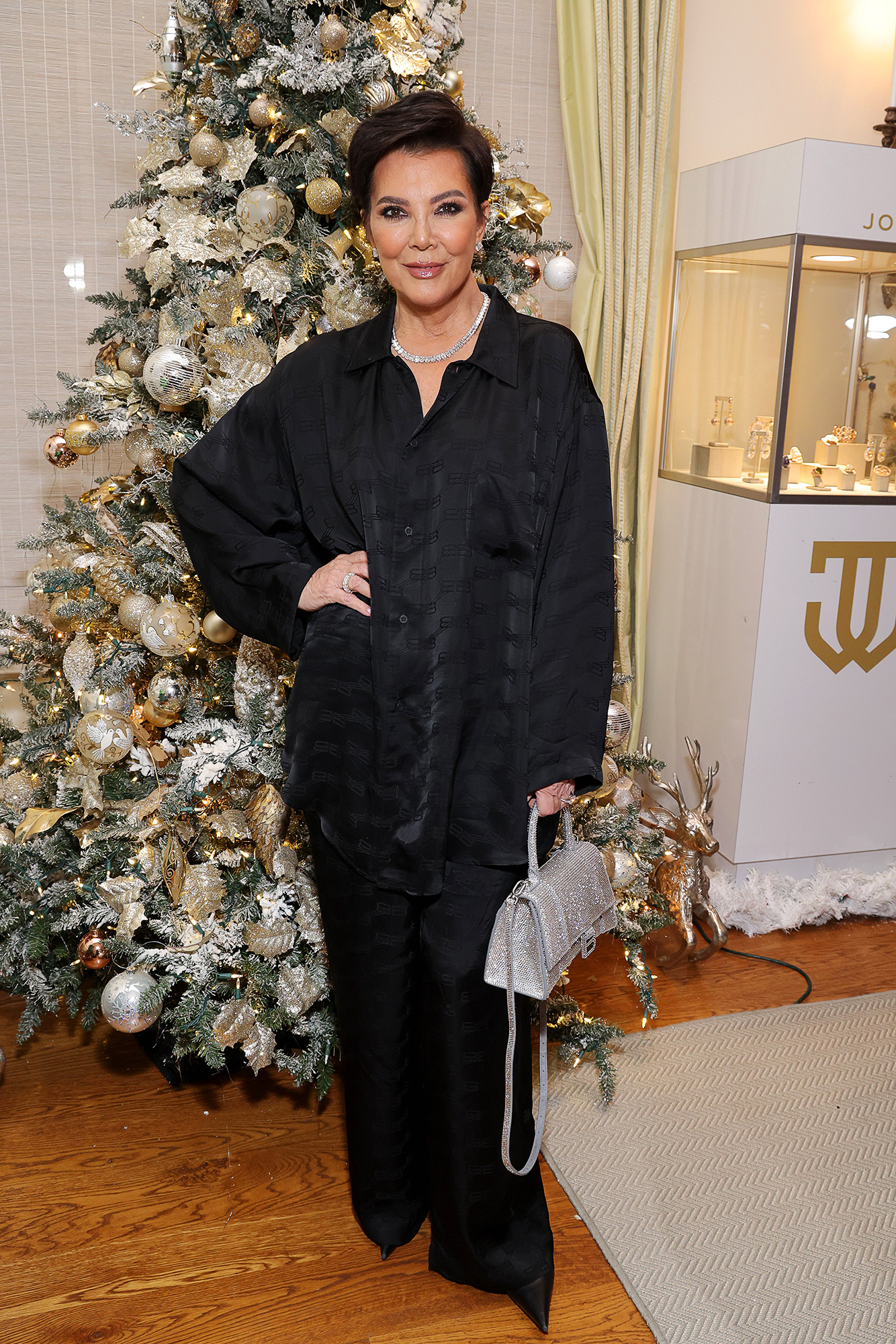 No one does Christmas like Lovey! Kris Jenner showed off her elaborate Elf on a Shelf display — with a toy custom-made for each of her 12 grandchildren.

‘The Holidays Have Arrived!’ Celebrities Show Off 2022 Holiday Decor

The momager, 67, took to her Instagram Story on Monday, November 28, to share the impressive holiday collection with her 50 million followers. “Thank you @ElfonaShelf!” she captioned the video, which panned over the 12 elves representing her grandkids — plus an extra for Lovey, as the little ones call her. Every doll featured a unique name tag for each child, including “Baby Boy Webster” and “Baby Boy Thompson,” as neither Kylie Jenner nor Khloé Kardashian, respectively, have revealed the names of their youngest children.

The Kardashian-Jenner family matriarch is a grandmother of 12 through five out of her six children: Kourtney Kardashian and ex-boyfriend Scott Disick are the parents of Mason, 12, Penelope, 10, and Reign, 7; Kim Kardashian and ex-husband Kanye West share North, 9, Saint, 7, Chicago, 4, and Psalm, 3; Khloé and ex-boyfriend Tristan Thompson are the parents of True, 4, and a 3-month-old baby boy; Rob Kardashian is the dad of Dream, 6, whom he shares with ex-fiancée Blac Chyna; and Kylie and boyfriend Travis Scott are the parents of Stormi, 4, and a 9-month-old son. Kourtney, for her part, is also stepmom to Travis Barker’s kids: Landon, 18, Alabama, 16, and his former stepdaughter Atiana De La Hoya, whom he shares with ex-wife Shanna Moakler. (Atiana is Moakler’s daughter with ex Oscar De La Hoya.) Kendall Jenner, a proud aunt to all of her nieces and nephews, does not yet have any children. 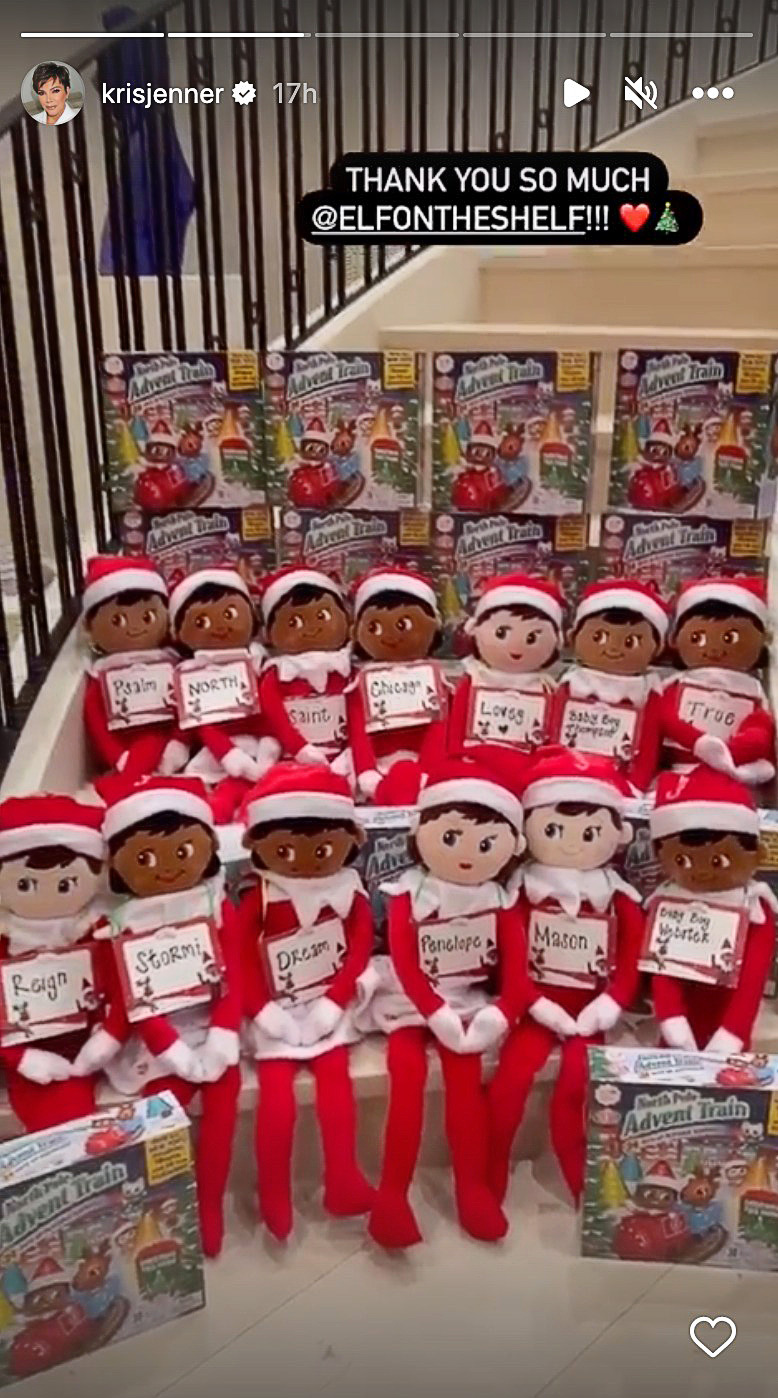 With such a large family comes an enormous amount of Christmas presents — and a marathon of holiday shopping. During a September episode of the Late Late Show With James Corden, Kris revealed that she had already checked off almost every item on her list.

“Kylie and I talk about this daily, and I think I’ve got most of my shopping done,” the Safely cofounder shared at the time, which the Kylie Cosmetics founder, 25, confirmed.

The Kardashian-Jenner Family: Get to Know the Next Generation

“I have 12 grandkids!” Kris exclaimed when host James Corden expressed his shock that she was done shopping months ahead of time. Though the Kardashians star was convinced she obtained all of the right gifts — explaining to the 44-year-old comedian that the six granddaughters tend to like LOL dolls while the six grandsons prefer for video games — Kylie revealed a hiccup in her mom’s plan.

“Well, Stormi, she’s moving back into mermaids now,” the makeup mogul pointed out.

Inside the Kardashian-Jenner Family’s Thanksgiving: Pics

The Kardashian-Jenners, who are known for their lavish holiday celebrations, celebrated Thanksgiving together earlier this month — a bash filled with family, fun and plenty food, including a mouthwatering dessert spread and a “honey bar.”