After Lil Nas X broke the Internet with ‘Montero (Call Me By Your Name),’ the rapper unleashed his emotional new song, ‘Sun Goes Down’.

Ahead of Lil Nas X’s highly-anticipated album –and one day before he makes his debut performance on Saturday Night Live — the singer dropped “Sun Goes Down,” the follow-up to his hit, “Montero (Call Me By Your Name).” As it has been the case with every release from Lil Nas X, 22, the song came with an accompanying visual, one will surely tug on your heartstrings. Want proof? Watch it above.

Lil Nas X announced “Sun Goes Down” on May 13, and shared some details about the song and video a few days later. “In the ‘sun goes down’ video, I go back in time to visit a younger version self who’s struggling inside, hating himself, [and] doesn’t want to live anymore,” he tweeted on May 16. “I try my best to uplift him. can’t wait to share this song and video with you guys on Friday. this one is really special to me.”

Judging by the tweet, the story of “Sun Goes Down” appeared connected to the themes with Nas X’s “Montero” video, which saw the rapper use Biblical imagery to convey his feelings of being “demonized” in society due to his sexuality. While the nuance of the story was there, many of the (mostly Christian, mostly conservative) backlash focused on the image of him riding a stripper pole down to Hell, where he gave a lap dance to Satan. Nas X ultimately snaps the Devil’s neck to take his crown and grow his own pair of angel wings, but this fact was seemingly overlooked in the discourse.

Lil Nas X took the blowback over “Montero” in stride, establishing himself as one of Twitter’s Final Bosses when it comes to dealing with trolls, attacks, and attempts to make him feel shame. The controversy may have also helped him on the charts. “Montero (Call Me By Your Name)” debuted at No. 1 on the Billboard Hot 100. While it only stayed one week in that position, it has remained in the Top 10 in the last six weeks and has already been certified Platinum. “Montero” is Nas X’s second No. 1, after his record-setting, inescapable monster of a hit, “Old Town Road.” 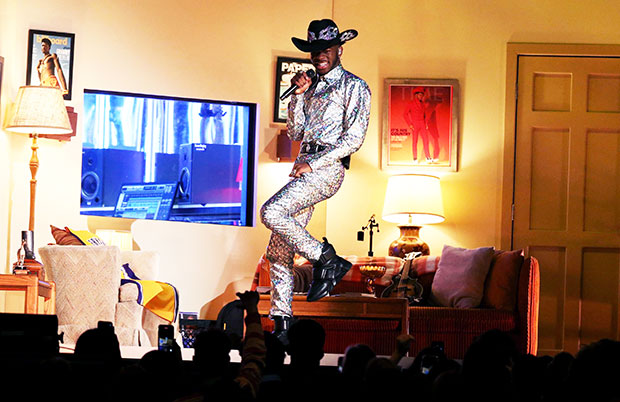 “Dear 14-year-old montero,” Nas wrote online after releasing the video. “I wrote a song with our name in it. It’s about a guy I met last summer. I know we promised to never come out publicly. I know we promised to never be ‘that’ type of gay person. I know we promised to die with the secret, but this will open doors for many other queer people to simply exist. You see, this is very scary for me. People will be angry. They wills ay I’m pushing an agenda. But the truth is, I am. The agenda to make people stay the f-ck out of people’s lives and stop dictating who they should be. Sending you love from the future.’”

“[‘Montero’] brought a new confidence out of me. To be able to say, ‘You know what? I want to do this.’ And I don’t give a f-ck who’s upset about it,” he told Apple Music’s Zane Lowe following the song’s release. “I feel like the moment I put this snippet out of this song, I just started to see a shift in myself gradually. The world’s going to keep spinning. But I can do what I want in my own artistic career at all times or I’m going to fail, for me at least. That’s how I feel.”

“Sun Goes Down” might be the last release from Nas X before he drops his highly-anticipated debut studio album, Montero. Ahead of “Sun Goes Down’s release, Nas X shared that he’s hyped to show everyone what he’s been working on. “I have had doubt about every single thing I have released in my career but not this album [though],” he tweeted. “Not this album! With all due respect, I am sh-tting on n—-s, not even lying.”