Families caught out by Australia’s changing border restrictions say they are anxious and stressed, after waiting so long to reunite, only to have plans ruined once again.

People returning to Australia from overseas must isolate for at least 72 hours and health officials are considering reintroducing 14 days’ quarantine for all international arrivals as a precaution against the new Omicron strain of COVID-19.

Official sources, who were not authorised to speak publicly, said state and national officials were mulling the quarantine extension beyond the 72 hours introduced on the weekend.

“This is our second or third time trying to get married, we got engaged in 2019 and like many brides have had to pivot and cancel plans and start fresh over and over again,” Ms Kloss said.

“We finally managed to organise a smaller affair on December 10th up in the Hunter Valley with just our closest friends and family. Both of our parents and three of our siblings live in New Zealand.”

“Finally, two weeks ago, it felt like there was a light at the end of the tunnel. Now … it feels like there’s not a lot of solution,” she said.

“As a COVID bride, it feels like all I’ve done is fix problem after problem, put out fire after fire. The entire process has been so deflating and heartbreaking, and when NSW made an announcement on Saturday evening about the 72-hour isolation requirement, I just broke down.

“It’s just so disappointing to get to close to the finish line and then fall a couple of hundred metres short.”

Ms Kloss said she paid deposits for her wedding, and stood to lose tens of thousands of dollars if she cancelled again.

“It’s near impossible to get a date for 2022 now because everyone has been moved so many times,” she said.

“COVID has stolen so many special moments from me and many other brides, but it was all worth it to me if they [my family] could just be there for the big day. Now to miss out by 24 hours on having them stand by my side makes me feel completely broken.”

Stephen Massa was sent to Papua New Guinea on a business trip. He said he was distressed by the thought of having to endure a longer quarantine and being unable to see his wife, Sandra, and children, Valentina and Christian, for even longer.

“I’m concerned it could change, it’s very much a developing situation. I just want to get back to Australia,” he said as he waited for his delayed flight at Jacksons International Airport in Port Moresby. 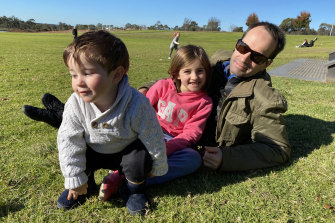 Stephen Massa with his children Valentina, 6, (centre) and Christian, 2.

“I was going to arrive back Monday morning and go straight home to my family, but now we’ve got the 72-hour isolation. I can’t isolate at home because I’ve got two young children and my wife there, and all I want to do is kiss and cuddle them,” he said.

“I’m just keen to get home because there are very [few] flights into Sydney from Port Moresby, and they’re all booked. If I miss this flight now, I will not get out before Christmas.”

With only 2 per cent of people in Papua New Guinea fully vaccinated, Mr Massa fears the Omicron variant could ravage the country’s residents if it did prove to be more transmissible than the Delta strain.

Melbourne man Ronak, who declined to publish his last name, said he was excited and relieved when he found out his parents would finally be able to enter Australia from India on Friday after being separated for three years.

But now the prospect of his entire family quarantining at home for two weeks with his parents would cause financial distress, he said, as he would not be able to work.

“Since the new Omicron variant has arrived we are feeling very anxious and stressed,” he said.

“My wife is struggling a lot especially mentally. She needs urgent support from my parents.

“We also paid a premium price for their flight ticket. If we had known they have to quarantine, probably they would have postponed their travel, but now we are very desperate for their support.”

The pair live in British Colombia and had planned an 11-day trip back to Australia to see Ms Davis’ husband after triple bypass surgery. The holiday would be cancelled if they were required to quarantine for a full two weeks.

“So many people get their hopes up to see family. It is so meaningful,” she said.

“Yes, we’ve got FaceTime and yes, we’ve got Zoom and Skype and everything else, but it’s not the same as being with someone physically.

“I think this has been devastating for so many people … I just feel desperately sorry for so many other families.”

Professor Davis said, as a physician, she understood the need for “tremendous caution” to protect the community, but said there should be some certainty for travellers around measures taken when a new COVID-19 strain emerges.

Sydney resident Benjamin Humphrey also believes there should be a clear plan for Australian travellers regarding how the government will deal with new variants and outbreaks.

Mr Humphrey’s fiancee is completing a two-week trip to the United States to see family for the first time in two years. She is due to return home on Friday morning, but the couple are anxious further measures, like quarantine for all arrivals, could come in before she arrives.

Mr Humphrey had a sleepless Saturday night after the late announcement that people returning from overseas must self-isolate for 72 hours, while those returning from southern Africa would need to spend 14 days in hotel quarantine.

“All of a sudden she has to do three days at home which is fine,” Mr Humphrey said.“But the problem is, what if it changes? Could she get on a plane home and then find out she has to do two weeks in hotel quarantine for a two-week trip?”

Mr Humphrey said the snap decisions and lack of clear guidance hurt the message that Australia and its states were reopening for business and overseas travel.

“It would be better if there was a plan where you could say, ‘this is a risk I’m willing to take’… but it’s just completely up in the air.

“I feel sorry for those people who were literally on planes because now they face hotel quarantine.”