On a still hot Saturday in early March, with the traffic slowing down to look, a crowd gathered around. Someone draped a towel over the eight-year-old boy as he lay completely motionless in his damp bathers on the sandy footpath seeded with ring tops and cigarette butts just metres from the sea. My father, also lying just beside me on the footpath, thought I was dead. Within seconds I had lifted my head only slightly and he got to see this, swallowing relief like fresh air just before he lapsed back into unconsciousness. Several metres away, the young driver of the car sat in the gutter with his head in his hands. An ambulance came. This was the accident. 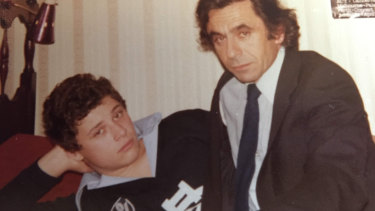 It’s hard to ever know with certainty how we get to be who we are, but the distance of time can, perhaps paradoxically, illuminate events in our lives that proximity to them obscures. When I was born, my sister had already been alive for four years but, born with a hole in her heart, an atrial septal defect, she was not expected to live beyond her early 20s unless she had open-heart surgery, back then a very new and risky procedure. To increase the likelihood of its success, the best time for her to undergo this surgery, my parents were advised, was when she was around eight. So from zero to four in my life, my parents cherished every moment with their beautiful, vivacious daughter, laughing with her, playing with her, while anxiously counting down the days.

My sister’s operation was, thankfully, entirely successful, although the child on the operating table immediately before her with the same condition was not so lucky.

Well before her surgery, though, I had hit upon a technique for relieving the apprehension my parents were on occasion unable to hide. The trick was to tell them – particularly my father – stories, to re-enact scenes from sitcoms, sing television commercials and eventually to learn comedy albums by heart and repeat them verbatim, replete with funny voices. And it often seemed to work. Monty Python was a favourite. I’ve never forgotten that it was a Peter Cook and Dudley Moore album that had gone down particularly on the day of that accident.

My father and I were taken to what was then called “Casualty”. My father had suffered a fractured skull which was not picked up by X-ray. Witnesses said he had instinctively pushed me out of the way of the oncoming car as we crossed the street at the traffic lights. Discharged from hospital after a week, he developed an unbearable headache during the following week. He was visited at home by a neurologist, who diagnosed a subdural haematoma that needed immediate surgery or he would die within hours.

In hospital for close to two months, he developed a second subdural haematoma, which was also removed. He also survived a cardiac arrest. Some 14 months later, he was readmitted to have part of a rib grafted to cover the hole in his skull through which the neurosurgeon had removed the haematomas.

It was 1972, and Harry Nilsson’s was on heavy rotation on Melbourne’s 3XY. When an eight-year-old heard Nilsson use all of his three-and-a-half-octave range to tell the listener that he “Can’t live, if living is without you,” it felt like Nilsson was singing those words for me to my dad.

About five months after the accident, Dad was able to go back to work at Monash University as a theoretical physicist specialising in quantum mechanics. But by then I was the kid who wrote the class plays, songs and stories and read as much as possible in an effort to do it all better. My father became my writing’s biggest fan and its sternest critic (the latter against stiff competition). 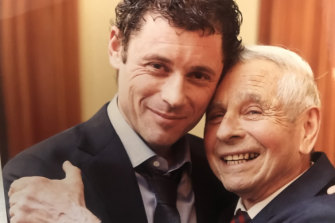 The business of telling stories eventually took me to New York, where I lived for nine years. On one visit home, my father and I went to a park to walk Sam, his pepper-and-salt standard schnauzer. My father looked way off into the distance and saw a man with similar build, colouring, clothes and dog.

I hugged my father there in that park not far from where I had grown up and told him I was coming home.

When advising creative writing students, I’ve always told them that their first audience should be themselves. But sometimes, if you’re incredibly lucky, it can be your father.

To read more from Good Weekend magazine, visit our page at The Sydney Morning Herald, The Age and Brisbane Times.