France’s Palace of Versailles is famous for its art – but the kind we’re watching five pastry makers scramble to assemble are of the edible kind. Overseeing them, a portrait of calm amid wobbly jellies, is culinary guru Yotam Ottolenghi. And he makes it all look like, well, a piece of cake.

The Israeli-born, London-based chef – and author of bestselling cookbooks Plenty, Jerusalem and Simple – is at The Metropolitan Museum of Art in New York curating desserts inspired by the gallery’s exhibition Visitors to Versailles.

His race to create a decadent display of desserts inspired by history is at the heart of a new documentary, Ottolenghi and the Cakes of Versailles, which opens in cinemas on Boxing Day. 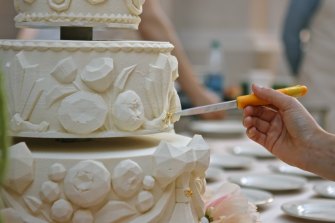 Ottolenghi and the Cakes of Versailles documents the collaboration between Yotam Ottolenghi and The Met.Credit:Madman Entertainment

And Ottolenghi devotees will have a chance to see the chef out of kitchen with a national Australian tour of his live show, Flavour of Life, announced for next June. It will focus on his vegetable dishes, home-cooking during the pandemic, and leadership in hospitality.

Ottolenghi and the Cakes of Versailles doesn’t just feel like stepping back into the indulgence of the 18th century. From our vantage point today, 2018 – when the film was shot – feels just as luxurious, with finger food not yet curtailed by the coronavirus pandemic. Ottolenghi doesn’t feel bad about the timing. The documentary is a hopeful reminder, he says, of how the world was and will once again be at some point.

“Guilty in the sense that I probably tantalise people, but pastry is all about tantalising the senses right?” he says.“This documentary really gives a historical perspective on things, and I think when you’re in a crisis, like we are now with COVID-19, it’s good to get a historical perspective and be reminded of how different the world can be, and used to be, and will be.” 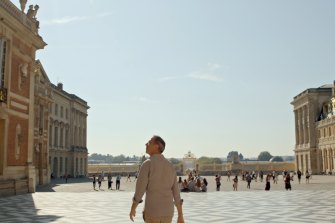 In a race against the clock to complete the food gala, Ottolenghi never deviates from the warm and generous persona that has made him one of the world’s most-loved chefs. He’s the opposite to the classics chefs that oversee many of our drama-filled, competitive reality TV cooking shows. There are moments where it looks like some of the ambitious desserts may not make it to the gallery floor, but there’s no temper tantrums. Would Ottolenghi consider a more serious pivot into television and film?

“I do an occasional appearance on cookery shows but I’m not a huge TV pundit,” Ottolenghi says. “I don’t watch much on TV and the TV that I have done involves travelling more than judging, normally there’s no competition – I don’t really connect to that so much. It takes so much time and it’s a whole different world. I think competitions are a good thing but I think we mustn’t forget that there’s so much more to learn and to do. We are always tempted to see one person pitching themselves against someone else and going head to head but I think there is just so much more to be done and I love the social, historical context of food. I think it’s really fascinating. This is where my passion lies.” 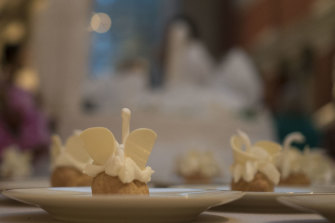 Ottolenghi says the pandemic is a “bit of a Versailles moment”.Credit:Madman Entertainment

While the desserts are sumptuous, the most pointed piece of commentary in the docuemntary comes while the cameras film the cleaners packing up after the event, scraping all the uneaten cake into the bin.

Ottolenghi sees parallels between the over-the-top excess that lead to the French Revolution in 1789, and the 21st century. The pandemic, Ottolenghi says, has been for some people a “bit of a Versailles moment”.

‘I love the social, historical context of food. I think it’s really fascinating. This is where my passion lies.’

“We’ve just gone too far in consumption, in excess, and we are reminded that there’s a more mundane reality for those other people who are left behind. I think there are these historical trends or movements and we are in one of those movements where there will be a bit of a setback just because we’ve maybe gone a little bit too far,” he says.

“We are humans, we are always trying to push the limits. We want more and more, both in terms of knowledge but also in terms of ownership. I think the French Revolution was an immediate reaction of those two human tendencies going too far.”

Ottolenghi and the Cakes of Versailles screens on Boxing Day. His live show Flavour of Life will tour Australia in June.