One star’s big day is about to turn into a very gleeful (pun intended) reunion. According to a new interview with Brides, Lea Michele asked Ryan Murphy to officiate her wedding to fiancé Zandy Reich. It’s unclear whether or not Murphy — who created Glee, the musical comedy that Michele starred in from 2009-2015 — has accepted her offer yet, but if he does, he definitely won’t be the only member of the Glee family attending Michele’s special day.

After more than a year of dating, Michele got engaged to Reich, her fashion mogul beau, in April 2018. In 2017, though, the star told E! News host Giuliana Rancic that she kind of already knew he was "the one" — thanks, in part, to the encouragement of Murphy.

"So Ryan is like my family," Michele told Rancic. "One of the greatest friends in the world that I have, so when my boyfriend got the seal of approval from Ryan Murphy, that’s it. Yeah, my parents, friends, whatever, but Ryan Murphy, done deal seals the deal."

Shortly after announcing her engagement, Michele revealed that she’d already asked another Glee alum — Jonathan Groff, who starred as Jesse St. James — to be her maid of honor. In an Instagram post from May of last year, Michele shared a cute pic of her and Groff with the simple caption "Maid of honor," followed by the double heart emoji.

But wait — there’s more. So much more. That’s right, Gleeks. In addition to Murphy and Groff, Michele also told Brides that both Becca Tobin, who played Kitty Wilde, and Darren Criss, who played Blaine Anderson, have been invited to her wedding, too.

Criss is currently engaged to girlfriend Mia Swier, and Michele said she’s enjoyed having close pals who are also in the process of planning a wedding. "Darren and I are such great friends," she told the publication. "He’s like a brother to me, so the fact that we’re in this really sort of important moment in our lives at the same time is really special."

Of Criss’ fiancé Swier, Michele added, "We’ve known each other for so many years now It’s just been great to have another bride that’s going through this process." She explained. "Just being like ‘what did you do for this?’ ‘What did you try for that?’ because it is a lot of information to funnel through." 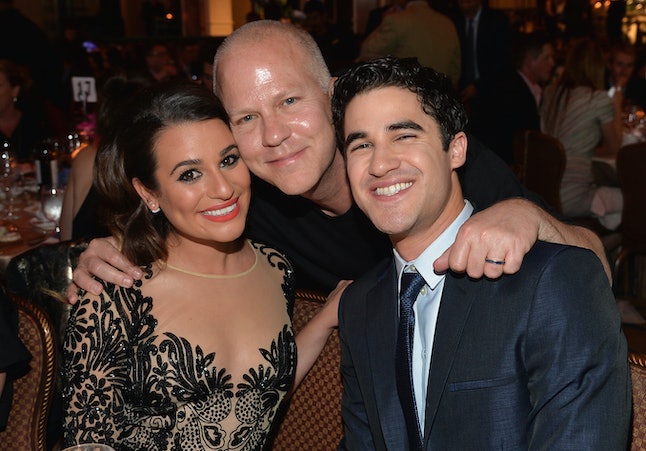 Michele and Reich are still working out a lot of the details surrounding their upcoming nuptials, the star told Brides. In fact, they haven’t even decided where the wedding is going to be yet. She has, however, chosen a dress, but would basically only reveal that it has a "classic" look and will "stand the test of time."

As for other famous faces that might show up at Michele’s wedding — once they figure out where and when it will be, of course — there’s a pretty good chance some of her former Scream Queens costars will snag an invite. Both Emma Roberts and Billie Lourd (Chanel #1 and Chanel #3, respectively) were at Michele’s engagement party, as was Roberts’ longtime boyfriend and multi-season American Horror Story star, Evan Peters.

Regardless of who ends up attending Michele and Reich’s big day, it already sounds like it’s going to be a blast.