Ah, yes. The ever so popular but always hilarious celebrity Instagram photoshop fail. It happens. Obviously, society would be infinitely better off without the omnipresent pressure to edit photos of ourselves, but we’re not there yet. Instead, we have things like Khloé Kardashian’s Diana Ross Instagram photo which has people questioning their sanity and asking out loud: "Wait… how many fingers do people usually have?" The answer is 10, but in Koko’s photo it looks like she might be teetering on, like, 12. Or something.

Ms. Ross turned 75 years old on March 26, 2019, and celebrated in true diva style. For all intents and purposes, she threw the biggest bash of the year. Khloé made the guest list and attended the star-studded event with her sister Kourtney and her mom, Kris Jenner. All three women dressed to impress in Diana Ross-inspired ensembles including sequins, bell bottoms, and big hair. Khloé opted for a gold draping number that came with a synched waist and big side of cleavage. She finished the look with a voluminous wig and giant gold hoop earrings.

Koko was clearly feeling herself all night as she posted videos to her Instagram story and marveled at the success of her own push-up bra. At some point, she snapped these two photos, which she captioned:

✨✨✨✨When the legendary Ms Ross invites you to her birthday party, you show UP as best you can. What a beautiful inspiration!! Thank you for having us ✨✨✨✨

Without me even zooming in, I’m sure you already see it…

Her left hand. What’s going on there?

At first glance, there is definitely something that’s off. Is it shadows? Is it multiple fingers? Are her really really really long nails playing tricks on our eyes? Fans sounded off in the comments immediately shouting "Photoshop fail!"

Let me zoom in so you can use your best judgment. 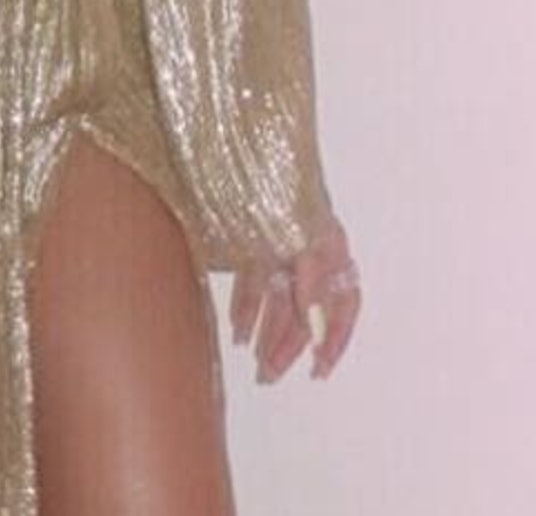 My personal opinion is that there’s something happening with her fingernails and the light. BUT! If this is a slip of the photo editor’s work, I wouldn’t be surprised. Koko and her sisters are no stranger to extra phalanges. Recently, Khloé posted a picture with an extra thumb and Kourtney has six toes in the Keeping Up With The Kardashians promo shoot.

I guess my biggest question is: When the professional is in there editing an image, what are the circumstances that lead them to rearranging, adding and/or deleting body parts? I can understand blurring out a pimple or erasing stray flyaways, but at what point is the editor like, "Ah, yes. The tootsies. Let’s tackle that baby toe and give it a twin sister."

It’s unclear if Khloé hasn’t seen the photoshop comments or just doesn’t care. My guess is most of the pictures this family shares are subject to photoshopping conspiracies and there’s only so much explaining they can do. Either way, her Diana Ross birthday party ensemble has the people talking, and you know what Kris Jenner says… No PR is bad PR.