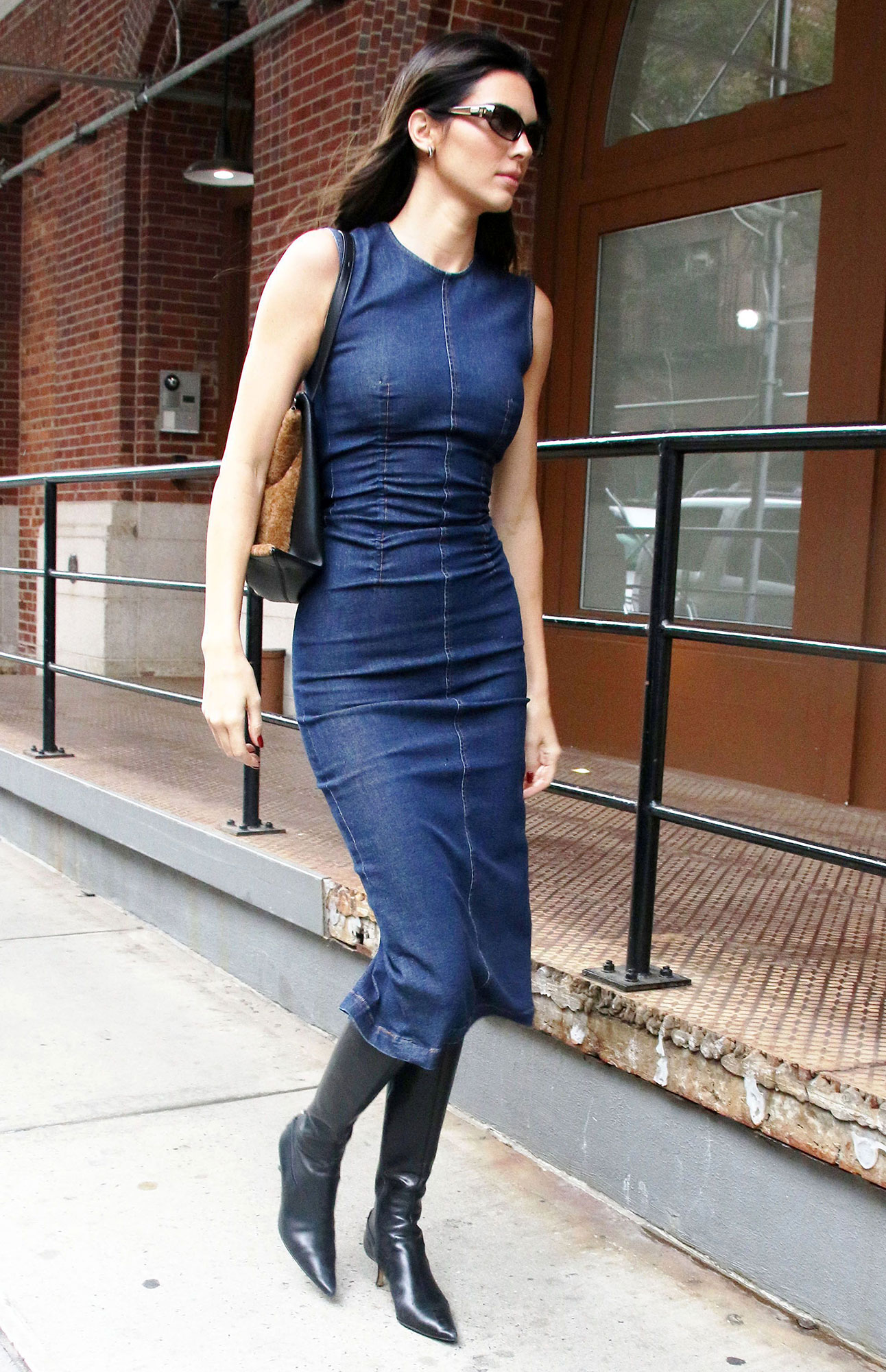 Kendall Jenner is fall fashion ready! The supermodel gave Us major style inspiration while out and about in New York.

Jenner, 26, was spotted in the Big Apple on Thursday, September 22, rocking a figure-hugging denim dress. The frock featured a midi construction and a flattering cinched waist.

The reality star paired the look with rounded sunglasses and a caramel-colored fur bag with contrasting black leather accents. On her feet, the runway expert rocked shiny black pointed-toe boots that were finalized with a stiletto heel.

Also on Tuesday, the TV personality opened up about her fashion evolution in an episode of Vogue’s series, Life in Looks.

The video started with the memorable animal print dress she wore to the Keeping Up With the Kardashians season 1 premiere party in 2007. “My mom and Kourtney had a store, a children’s clothing store called Smooch. We would always go there to get all our clothing,” Jenner said. “I’m pretty positive both of these dresses were more than likely from Smooch.”

Kendall Jenner Through the Years

Next up was the Hulu star’s first catwalk in 2014. “This was my first high fashion show, and it was for Marc Jacobs. I actually could not believe I was there,” she said of the moment.

For the big day, Jenner rocked a see-through sweater and loose-fitting pants. “[I] weirdly had little nerves and I think it was because my shoes were relatively flat. I was pretty chill, even though my boobies were out,” Jenner joked.

Another standout fashion moment from the Kardashians star came in 2018 when she attended the Met Gala with Virgil Abloh. “I loved this Met,” Jenner said. “Virgil had just announced that he was going to be with Louis Vuitton, so he was in Louis Vuitton, and I was in Off White.” (The famed designer, who founded Off White, died in November 2021 following a private battle with cancer. He was 41.) 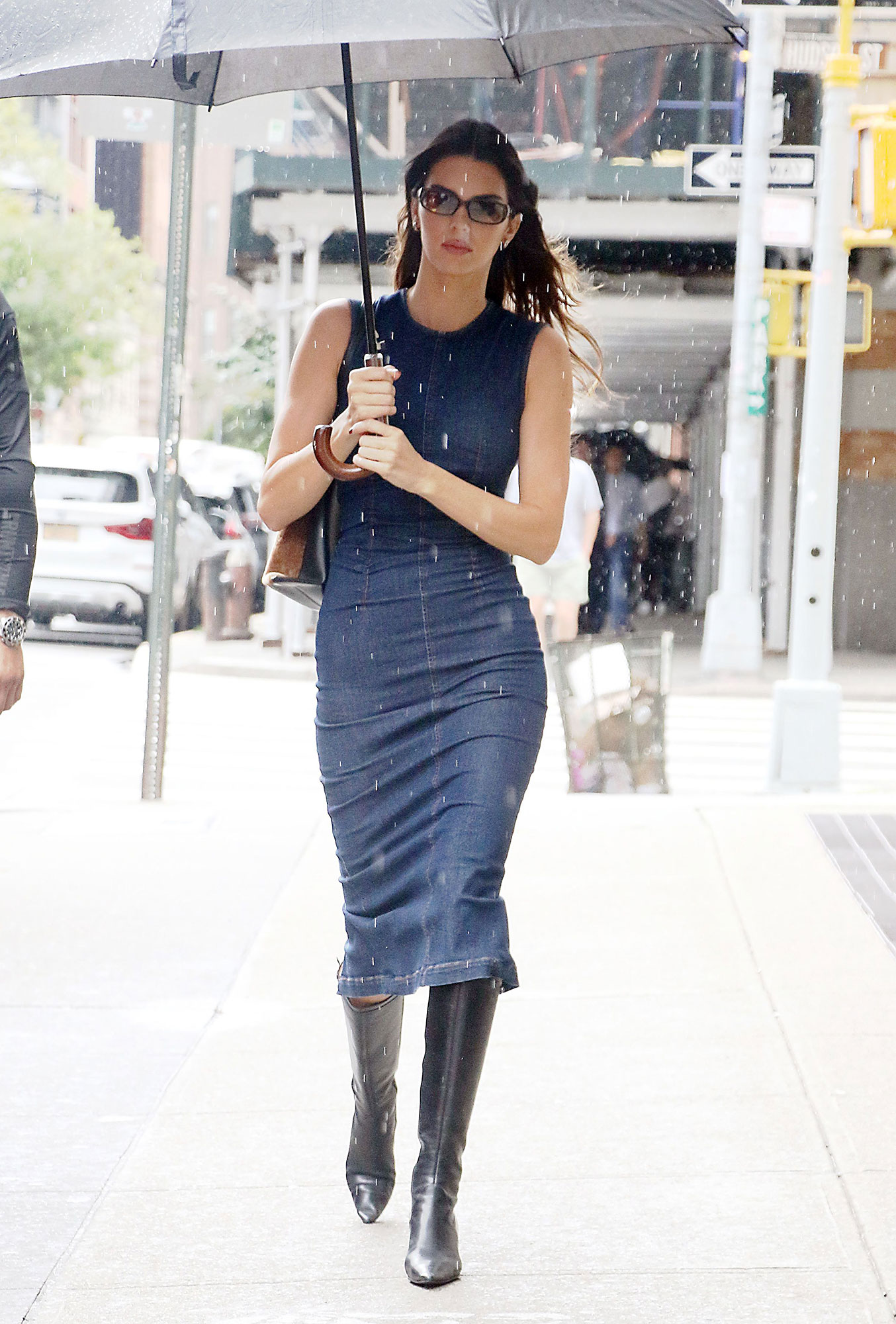 “We worked together really heavily on creating this look for me,” Jenner said of the whimsical white jumpsuit she wore to fashion’s biggest night. Abloh, for his part, looked dapper in a white tuxedo. “Most of our conversations were over FaceTime, but you never felt like there was a disconnect. He was always putting all of his energy into it … You always felt safe in his arms,” she shared.

About Last Night: See the Best Dressed Stars on the Red Carpet and Beyond

The episode concluded with the floral Dolce & Gabbana two-piece set she wore to sister Kourtney Kardashian and Travis Barker‘s pre-wedding lunch in Portofino, Italy, in May. “A version of this was worn by Monica Bellucci in 1997 … So, I felt super honored to be able to wear it,” Jenner said of the vintage number.

Reflecting on her style through the years, Jenner said she’s proud to see how “comfortable” she’s become in her skin.

“What I see the most at least … is just my comfort level and me evolving into myself. I look back at the first little girl we saw and how uncomfortable she was … and coming into this girl who is a lot more [comfortable.] I’ve found myself as a woman,” Jenner said.