Surging job ads and signs inflation pressures are embedding themselves in the economy may force the Reserve Bank to bring forward plans to slow its money-creation program at its final meeting of the year.

The RBA board had planned to review its $4 billion-a-week program of buying government debt at its February meeting but data suggests the economy and jobs market are recovering quickly out of Delta-related lockdowns in NSW, Victoria and the ACT. 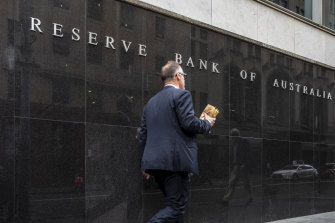 The last meeting of the year for the Reserve Bank board is expected to be dominated by its plans for the eventual end of its bond-buying program. Credit:Louie Douvis

ANZ’s measure of job ads jumped 7.4 per cent in November to stand 44.2 per cent above its pre-pandemic level. It is now at its highest since 2008, just ahead of the global financial crisis when the national jobless rate fell to 4 per cent.

ANZ economists Catherine Birch and Arindam Chakraborty said there should soon be upward pressure on wages growth because of the tight jobs market.

“The job ads suggest the unemployment rate should drop back below 5 per cent in the near term, and we expect it to fall to around 4 per cent by the end of 2022 and even further in 2023,” they said.

“We think competition for labour will get even hotter and workers will exercise their new power by changing to better jobs and asking for higher wages in 2022. In our view, that should push wages growth up to around 3 per cent in 2022.”

A separate measure by SEEK showed a 1.1 per cent increase in new job ads, the third consecutive monthly improvement. It is now 52.1 per cent above its pre-pandemic level and at its strongest in the 23-year history of the measure.

SEEK found a slight fall in NSW last month but it is 44 per cent above its pre-pandemic level. Ads in Victoria rose 3.6 per cent last month to be almost 61 per cent higher than before the pandemic.

National Australia Bank senior economist Tapas Strickland said ads in hospitality and tourism were up 7 per cent through the month to be 113.6 per cent higher than their pre-pandemic level, a sign of the impact of the closed international border on that sector.

He said in a further sign of the tight market, the number of people applying for jobs was falling, with shortfalls in government, defence industry and hospitality the most acute.

The RBA has repeatedly said it wants to drive the jobless rate down towards 4 per cent in a bid to lift wages growth and inflation.

Tuesday’s meeting is the bank’s last for the year. It will not reconvene until February, at which point it had planned to review its $4 billion-a-week bond-buying program.

While markets are not expecting the RBA to change the official cash rate at its meeting, economists believe the bank may use it as a chance to express its view on the direction of the economy.

Westpac chief economist Bill Evans said a change in the bond-buying program, to $2 billion a week, might occur at the February meeting.

“Governor Philip Lowe continues to emphasise the board’s patience with respect to the timing of the initial rate increase. Westpac remains comfortable with our view that the bank’s first move will come in February 2023, although markets are anxious for a mid-2022 move,” he said.