Politicians and their staff should have a new code of conduct, enforced by an Independent Parliamentary Standards Commission, and all parties need to push for gender parity to change the workplace culture within Parliament, Sex Discrimination Commissioner Kate Jenkins has recommended.

Ms Jenkins’ report, which was tabled in Parliament on Tuesday, also recommended developing clear guidelines that set out expectations and standards around the use of alcohol in Parliament. 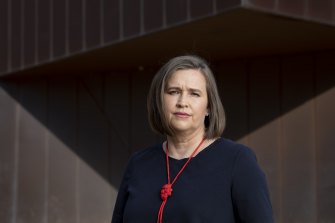 Ms Jenkins also recommended the Speaker and Senate President along with other parliamentary leaders make a formal acknowledgement of the harm caused to staffers and politicians from bullying, sexual harassment and assault in parliamentary workplaces should be made to begin the healing process.

Prime Minister Scott Morrison asked Ms Jenkins to investigate the culture in the days after former ministerial staffer Brittany Higgins went public with allegations she was raped by colleague Bruce Lehrmann. Mr Lehrmann denies the allegation and the matter will go to trial in the ACT Supreme Court in mid-2022.

Her inquiry interviewed hundreds of people and held group consultations, covering all types of people who work in Parliament House and electorate offices, including current and former politicians, staffers, journalists, cleaners and Comcar drivers.

Politicians and staffers have been doing respectful workplaces training and a new serious incident response team has been set up to triage complaints about sexual harassment, assault and bullying in politicians’ offices, as recommended in a separate review by senior Prime Minister and Cabinet bureaucrat Stephanie Foster.

This week, both chambers agreed to set up public registers showing which MPs have completed the training and when.