If you’ve been waiting for an owl to bring you news of a new book about Harry Potter or another play starring his son, it’s time to learn that, like your Hogwarts letter, they’re probably never coming. According to the creator of the Wonderful Wizarding World J.K. Rowling, there will not be another Harry Potter story, and there’s no spell, charm, or curse that can change it.

At Sunday night’s New York premiere Harry Potter and the Cursed Child on Broadway, Rowling crushed the dreams of Potterheads at the theater and around the world when she said she did not have any plans to continue the story of The Boy Who Lived beyond Cursed Child. “I think we really have now told, in terms of moving the story forward, the story that I, in the back of my mind, wanted to tell,” Rowling explained to Variety. “I think it’s quite obvious, in the seventh book, in the epilogue, that Albus is the character I’m most interested in. And I think we’ve done the story justice. So I think pushing it on to Harry’s grandchildren really would be quite a cynical move, and I’m not interested in doing that.”

Although fans would love to be able to return to the familiar halls of Hogwarts or the bustling streets of Diagon Alley, it seems Rowling has taken the beloved narrative as far as she has planned to. Harry Potter and the Cursed Child follows the adventures of Albus at school and his father’s challenges at home, but as the author explained, they are the last wizards in the heroic line she has a story for. 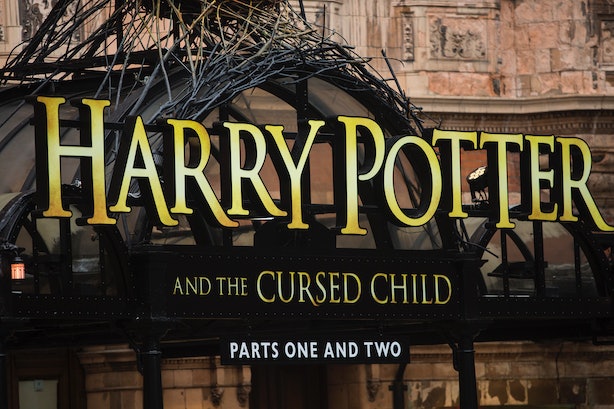 This is not the first time Rowling has bursted the Harry Potter fandom’s bubble by revealing less-than-welcome news about the future of her franchise. In 2016, she told Potterheads "Harry is done now," with the publication of Harry Potter and the Cursed Child (though two years later, many of us were clearly still holding our breaths.) Then, in 2017, she made it clear there would not be a "Cursed Child" film adaptation, despite the constant rumors otherwise. Fans can, however, still catch the play on Broadway.

Harry Potter and the Cursed Child: Parts I & II is currently being staged at the Lyric Theater in New York. To no one’s surprise, tickets for Cursed Child are nearly impossible to get, but Bustle has all the details on how to purchase yours so you don’t miss out on what Rowling says is the last story for Harry Potter.

While Rowling won’t be giving readers a ninth Harry Potter book or more Cursed Child plays or movies, fans still have plenty of Fantastic Beasts content to look forward to. It has been shrouded in casting controversy for the better part of the last year, but the highly anticipated The Crimes of Grindelwald finally hits theaters this November. On the same night Rowling confirmed, for the umpteenth time, that she wouldn’t be writing any more stories about Harry Potter, she announced Jessica Williams’s secretive role in the film, Professor Lally Hicks, which is yet another reason to get excited for the future of the franchise. Plus, there are more films in the series after The Crimes of Grindelwald, including the third film slated for release November 2020. Not to mention, there is always plenty of Harry Potter stories to read, fun quizzes to take, and swag to shop for on Pottermore. Even following Rowling on Twitter is like being immersed in the Wonderful Wizarding World, complete with writing advice, character insight, myth debunking, adaptation news, and plenty of magical inspiration.

Rowling may be done with Harry’s story, but readers never quite will be.