It’s official: another Bachelor couple just tied the knot. Arie Luyendyk and Lauren Burham got married in Hawaii on the island of Maui on Saturday, Jan. 11, as confirmed by Us Weekly. The couple exchanged vows at Haiku Mill in a ceremony officiated by none other than The Bachelor franchise host Chris Harrison. Of course, the wedding’s guest list also included lots of Bachelor alums, such as Jenna, Seinne, Maquel, Marikh, and Jacqueline, to name a few.

Just a year ago, Arie’s season of The Bachelor premiered and viewers saw the couple’s first meeting on-screen. Back in May 2018, Arie and Lauren announced their wedding date and Hawaiian wedding venue on The View. Now, the couple has gotten hitched in a lovely Hawaiian wedding and they are expecting their first child, a baby girl who already has her own Instagram account.

On Saturday morning, Arie posted a romantic sunrise photo of Lauren drawing a heart in the sand to his Instagram story. "Happy wedding day!! 1/12/19 [heart emoji]," he wrote as the caption.

The day before the wedding on Friday, Jan. 11, both Arie and Lauren posted photos on their respective IG accounts in anticipation of the wedding. Arie posted professional photos of him and Lauren in front of a rainbow with the following caption: "Life with you is all sunsets and rainbows ❤️ We’re getting married tomorrow!"

Jenna, Seinne, Maquel, Marikh, and Jacqueline posted Instagram Stories from Lauren and Arie’s pre-wedding festivities — Lauren went on a hike with the women, then she and her friends met up with Arie for a pineapple tasting tour. 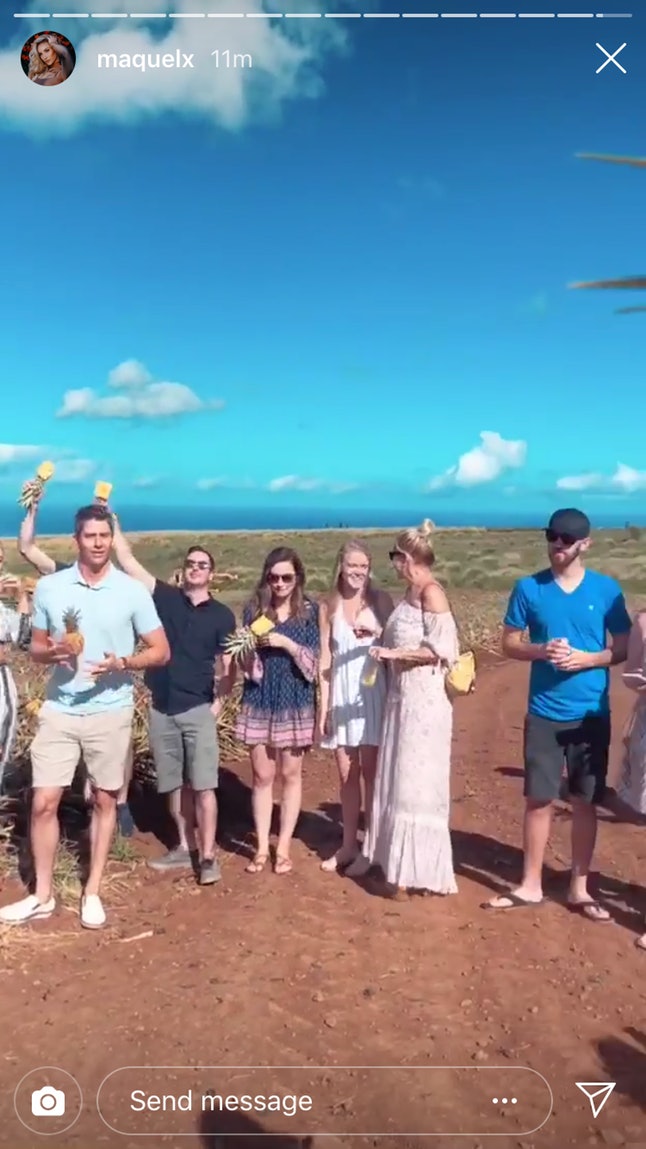 Later on Friday, Arie and Lauren’s rehearsal dinner gathered everyone together — friends, family, Bachelor alums, and Chris Harrison — for a sunset cruise on Lahaina Harbor, according to Us Weekly.

But there is one Bachelor fave who missed out on the wedding: franchise executive producer Mike Fleiss. He tweeted his congratulations to the couple on Saturday morning, saying he wished he could be there.

The happy couple themselves also got a gorgeous view of the Aloha State in a helicopter tour of the Hawaiian islands, which they posted about on Instagram last week. "Finally took @laureneburnham on a proper @bachelorabc helicopter date. With a stop for sparkling cider of course!" Arie captioned the photos from the helicopter ride. It’s a reference to Arie and Lauren’s helicopter date in Peru on The Bachelor — quite a full circle moment.

Even Arie and Lauren’s Baby Luyendyk Instagram account even celebrated the wedding of her parents. The the baby’s Instagram posted a photo of Lauren’s pregnant belly in a bikini on a Hawaiian beach with a lengthy update in the caption that concluded by saying, "Well gotta run, Mom and Dad are getting married this week and it’s hard to type with Mom moving around so much!"

Earlier this month, Arie and Lauren revealed that they were having a baby girl — even though an early test had indicated that their child would be a boy. “We went back to the doctor, went back a few other times and just went back for our anatomy scan. It’s definitely a girl!” Arie told Us Weekly. Arie and Lauren announced that they were expecting back in November 2018. A few days later, Lauren had her Bachelorette party in Las Vegas with her Bachelor friends — and even Arie was in attendance, too.

Back in August 2018, Lauren and Arie held a bridal shower in her hometown of Virginia Beach, Virginia, and it had a Hawaiian theme, of course, to match where the state where their wedding would be taking place.

The couple has come a long way since when they first met on The Bachelor — and, now, they are officially husband and wife.