A three-year pitched political battle to put in place the goods and services tax so dominated the thinking of the Howard government that it had to decide when to shut the nation's pubs while fighting off internal concerns on everything from petrol to the red tape faced by businesses.

Cabinet papers from 2000 released on Friday by the National Archives of Australia reveal the extent then-Prime Minister John Howard, Treasurer Peter Costello and other senior ministers wrestled with the minutiae of a generational change in the nation's tax system. 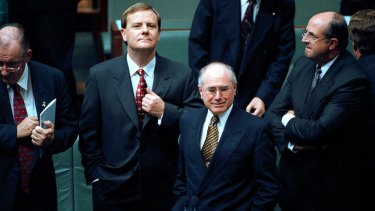 Mr Howard, who had previously ruled out a GST, narrowly won the 1998 election promising the consumption tax would replace the wholesale tax system, deliver guaranteed revenue to the states and shift tax off personal income.

After Mr Howard struck a deal with the Australian Democrats to get the GST through the Senate, he, Mr Costello and the rest of the government had to focus on how to put in place the tax that started operation on July 1, 2000. 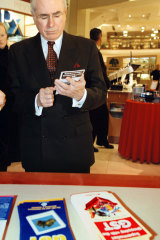 Then-Prime Minister John Howard examines a pamphlet on how to shop with the GST on July 1, 2000.Credit:Brendan Espositio

The cabinet papers show how a decision had to be made about pubs that operated beyond midnight. Would a beer bought at 11.59pm have a different price because of the GST if it was purchased at 12.01am?

Ultimately, pubs were allowed to close off their tills with pre-GST prices even if they finished trading hours into the new financial year.

The Australian Tax Office came under pressure to increase the rollout of Australian Business Numbers to firms that were coming into the tax system because of the GST.

The Australian Competition and Consumer Commission was arguing well into the year with the then still partly government-owned Telstra over changes to the pricing of phone calls and other telephonic services.

Concerned about how the tax was being understood, the cabinet papers reveal an extra $20 million was approved on advertising.

In his book The Costello Memoirs, the former treasurer noted that the Tax Office had been overwhelmed with demands for indicative rulings on how to administer the GST.

That led to Mr Costello at one point working with then Tax Commissioner, Michael Carmody, to set down his own rulings.

"I had decided the policy and knew how I wanted it to work," he wrote.

Deputy Prime Minister and National Party leader at the time of the GST's introduction, John Anderson, said the debate over the GST was perhaps the last time there was a proper policy argument.

"The last time we had a full-blooded and real debate about important issues in Australia, in the minds of the Australian people, was in fact the GST," he said. "It was heated … reflecting the quality of the two major parties. It was not particularly personal but on the issues it was as full-blooded as you would have wanted it to be and that was a good thing."

Despite the intense activity, the cabinet papers only touch upon two issues that almost undid the GST's introduction.

Petrol prices were not supposed to change as the GST replaced wholesale sales tax, but the cabinet papers show there were concerns in February 2000 that this promise may not be met. The papers show ministers agreed that "no public references" be made to its investigation of the issue.

But soon after July 1, motorists were letting the government know their anger at what had happened to petrol prices.

Mr Anderson admitted the petrol price issue was a telling one, especially in country areas, and undermined the government's standing with voters.

"There was a fudge on fuel prices. We had resolved that to make sure petrol wasn't pushed up by introduction of GST as excise was cut," he said.

The other issue was the introduction of business activity statements, a key feature of the GST payment and monitoring system.

Small business in particular complained about this, and found support with Mr Anderson, who admitted the statement was not the simple form promised by the government.

A trip to the family farm revealed a document too complicated for most small businesses.

"I was aghast, because it wasn't what I felt we had signed off on," he said.