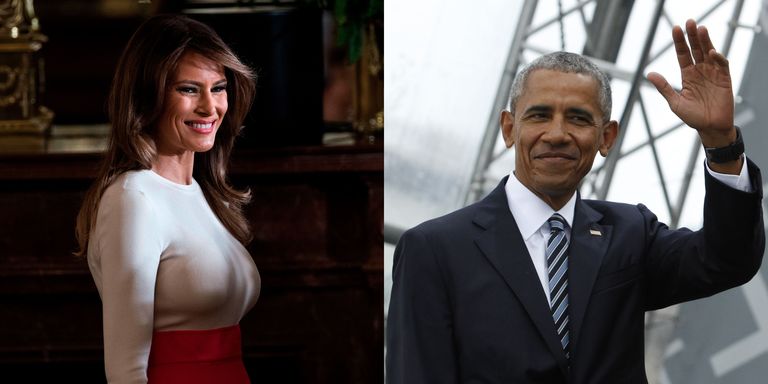 On Saturday, Barack Obama and Melania Trump were among the attendees at former first lady Barbara Bush’s funeral in Houston. Although Donald Trump opted to skip event, citing concern about the disruption his security would make and respect for the family as reasons, the first lady represented the current administration and settled in next to Obama for the service, People reports.

One picture in particular of the former POTUS and current FLOTUS has the internet very pleased. In the photo, taken before the service began, Obama and Melania are seen talking and she is positively beaming at whatever Obama said to her.

“Melania looks happier at a funeral than she has in ages. Wouldn’t you too if you went from being with Donald every day to sitting next to Barack?” wrote one person on Twitter.

The general consensus on Twitter is that Melania looks happy for the first time in a while and it’s quite the coincidence that it happens to be at an event (even a devastatingly sad one like a funeral) that she’s attending without her husband.

What an image given the tweets statements, and speeches in the past 445 days. Wonder what President Obama just said to Mrs. Trump…. pic.twitter.com/lnI0GGpX7n

Melania looks happier at a funeral than she has in ages. Wouldn’t you too if you went from being with Donald every day to sitting next to Barack?
#barbarabushfuneral pic.twitter.com/JrnLY0MJyX

At the funeral for Barbara Bush today, Melania Trump sat next to guess who…
Barack Obama!

After over a year in office, Melania has not smiled once in the presence of Donald Trump.

10 minutes with Obama’s, and look what happened!

The absence of @realDonaldTrump speaks volumes.

Shout out to my man Barack Obama for keeping Melania company while her petulant toddler of a husband is golfing…#BarbaraBushFuneral #SaturdayMorning pic.twitter.com/sKFvnIzouK

Melania, usually stone-faced, is seen smiling for the first time in a while next to Barack Obama.

Donald is not going to like this picture. RT! #BarbaraBushFuneral pic.twitter.com/4XDbLhr2uO

Today we saw living proof that it is more fun and relaxing to be with Barack Obama at a funeral than it is to be with Donald Trump at a festive social event. Once we get DJT out of the White House, we can Make America Smile Again. (MASA) ??? https://t.co/xLv4B0H70x

How many years has it been since Melania has genuinely smiled like this? Once you go Barack, you never go back. pic.twitter.com/1kqE6aLxi2

Melania Trump is happier at a funeral with Barack Obama than at an inaugural luncheon with Donald Trump.#Melania #Obama #BarbaraBush pic.twitter.com/rYXH8vMzr8

Finally Melania has something to smile about. She’s sitting next to Barack at Barbara Bush’s funeral. pic.twitter.com/O4zAr2uQwH

Find someone who smiles at you the way Melania Trump smiles at Barack Obama pic.twitter.com/uHS8MvsMXA

Melania after sitting next to Barack today : pic.twitter.com/5Ty2Ub7ml8

Barack: Good to see you smile for a change.
Melania: Some people choose to see the ugliness in this world. The disarray. I choose to see the beauty.
Barack: So you watch #Westworld
Melania: Not really. I tried to once.
Barack:
Melania: It doesn’t look like anything to me.
Barack: pic.twitter.com/1lUHIFxH4l