British woman, 63, whose chest infection left her in a coma in Mexico is STRANDED after insurance company refused to pay her £135K bill or fly her home because she ‘didn’t bring her asthma inhaler’

A pensioner who was put into an induced coma abroad says she has been left stranded after her insurance company ‘refused’ to pay for treatment and her return flight.

Heather Maskell, 63, from East Sussex, was on holiday in Cancun, Mexico, with her partner of 20 years Ray Lewry at the beginning of last month, when she fell ill with a severe bacterial infection to her chest.

The retired couple assumed she had caught a cold, but just days later, on the 12 September, her chest became so congested she couldn’t breathe, and she was rushed to hospital on the advice of the on-site doctor at Hard Rock Hotel Cancun.

Heather was put in an induced coma and onto a ventilator as she couldn’t breathe by herself, before hospital withdrew the sedation on the 18 September.

Worried she wouldn’t wake up, her sister few out on the 21 September, but four days later Heather finally woke up.

However on waking up she found that her medical insurance company Barclays/ CEGA had withdrawn funding for her treatment and special transport home, a £135,000 bill, because she had failed to declare a new asthma medication prescribed in 2017.

Heather Maskell, 63, from East Sussex, was on holiday in Cancun, Mexico, with her partner of 20 years Ray Lewry at the beginning of last month, where she goes every year (pictured centre with other holiday makers) 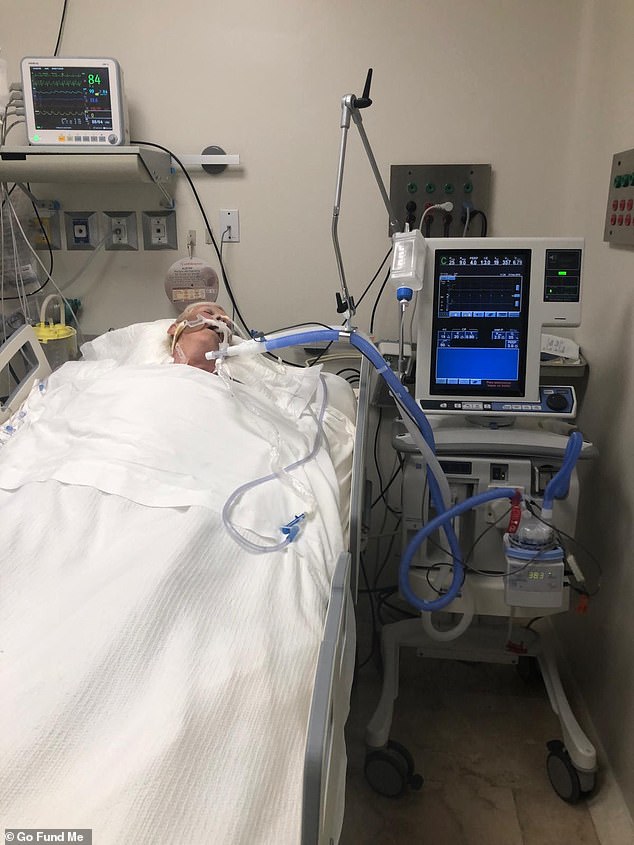 She fell ill with a severe bacterial infection to her chest and on the 12 September, her chest became so congested she couldn’t breathe, and she was rushed to hospital (pictured) on the advice of the on-site doctor at Hard Rock Hotel Cancun

Speaking to Femail, Heather’s niece Sian Sponge Crossland, from Dover, revealed how she has launched a Go Fund Me page in a desperate bid to raise the funds needed to pay off the hospital bill and return to the UK.

Recalling the past few weeks, she recalled the moment the family were unsure whether Heather would wake up, explaining: ‘The doctors expected my auntie to wake up within 48 hours of withdrawing sedation, but she didn’t.

‘My mum flew out to Cancun on 21st September to be with her as we didn’t think she was going to wake up.

‘By some miracle she did wake up on 25th September. She is still very weak but is recovering from her infection slowly and will need rehabilitation to help build back up the muscle loss she has from being in the coma.’ 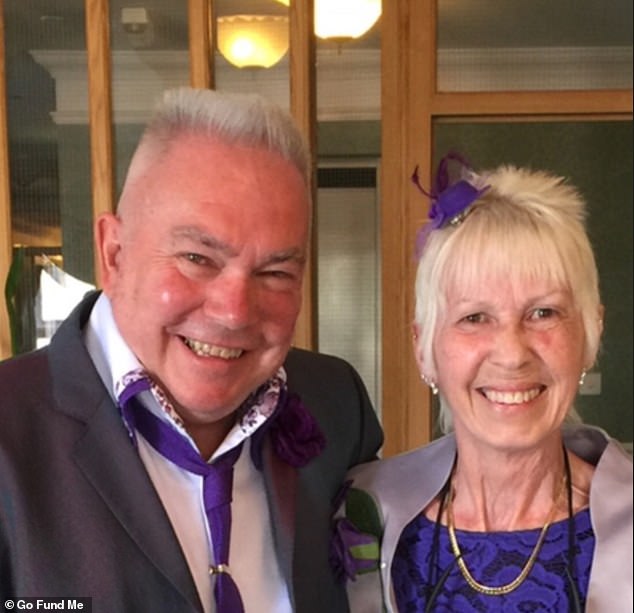 Heather  is seen with her partner of 20 years Ray Lewry, both are pensioners and have been forced to borrow money from Ray’s sister’s saving fund for her disabled children 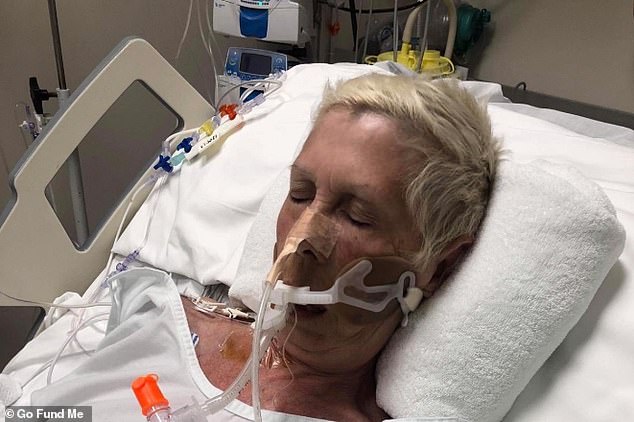 On waking up she found that her medical insurance company Barclays/ CEGA had withdrawn funding for her treatment and special transport home, a £135,000 bill, because she had failed to declare a new asthma medication prescribed in 2017

She continued: ‘Her medical insurance company Barclays/ CEGA authorised funds for treatment on the 12th of September.

‘However on the 27th September they then withdrew authorisation for funds naming the reason as her not declaring a preventative medication that she was issued in 2017 for asthma.’

The family were left with a staggering bill of £135,000 and are not allowed to leave until they have paid it.

Sian said: ‘My auntie is retired and she do not have this kind of money available.’

Heather’s sister Linsey Webb added: ‘Heather and Ray are both retirees and they go to Cancun every year for an annual holiday.

‘Heather has copd (Chronic Obstructive Pulmonary Disease) and asthma, both are accepted pre existing conditions and well managed – she can walk for miles.’ 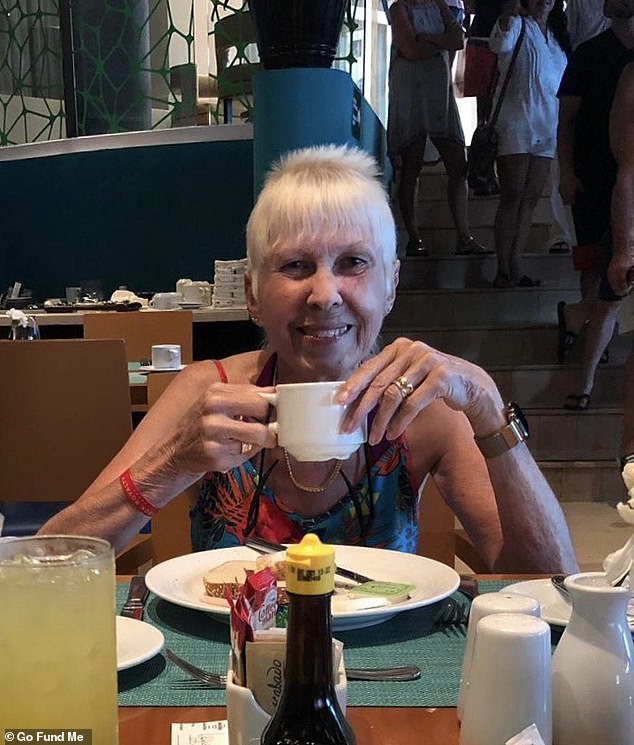 Heather (seen on holiday before she fell ill) is now stable but the family have been left with a staggering bill of £135,000 and are not allowed to leave until they have paid it

She continued: ‘The cost of medivac (medical evacuation if a patient needs special transport due to a condition) is £85,000 and the current hospital bill is and rising.

‘They cannot leave until the bill is paid in full, they are retired and do not have access to this sort of money.

‘Ray’s sister has lent them £50,000 their life savings that they need for their disabled children’s care after they are gone.’

A heartbreaking plea on Sian’s fundraiser page reads: ‘We understand that this is a lot of money we are asking for.

‘We can provide medical documents, photos, pretty much any reassurance that is needed to prove this is a genuine plea for help. We are so desperate to help my auntie and to get her home, so please please consider donating just £5.

‘Thank you from the bottom of my heart for taking the time to read my post. We are eternally grateful!’

WHAT IS CHRONIC OBSTRUCTIVE PULMONARY DISEASE?

Chronic obstructive pulmonary disease (COPD) describes a group of lung conditions that cause the airways to narrow and become inflamed.

Examples include bronchitis, which affects the airways, and emphysema, which impacts the air sacs.

This makes it harder to move air in and out as you breathe.

Around 1.2million people in the UK are diagnosed with COPD, British Lung Foundation statistics show.

And in the US, 16million people suffer from COPD, according to the Centers for Disease Control and Prevention.

It usually develops due to long-term damage to the lungs from smoking or air pollution.

Jobs where people are exposed to fumes, dust and chemicals also raise the risk.

In severe cases, sufferers lose their appetite, have swollen ankles, lose weight and may even cough up blood.

COPD is incurable and the damage to the lungs cannot be reversed.

Patients should also quit smoking and maintain a healthy weight.