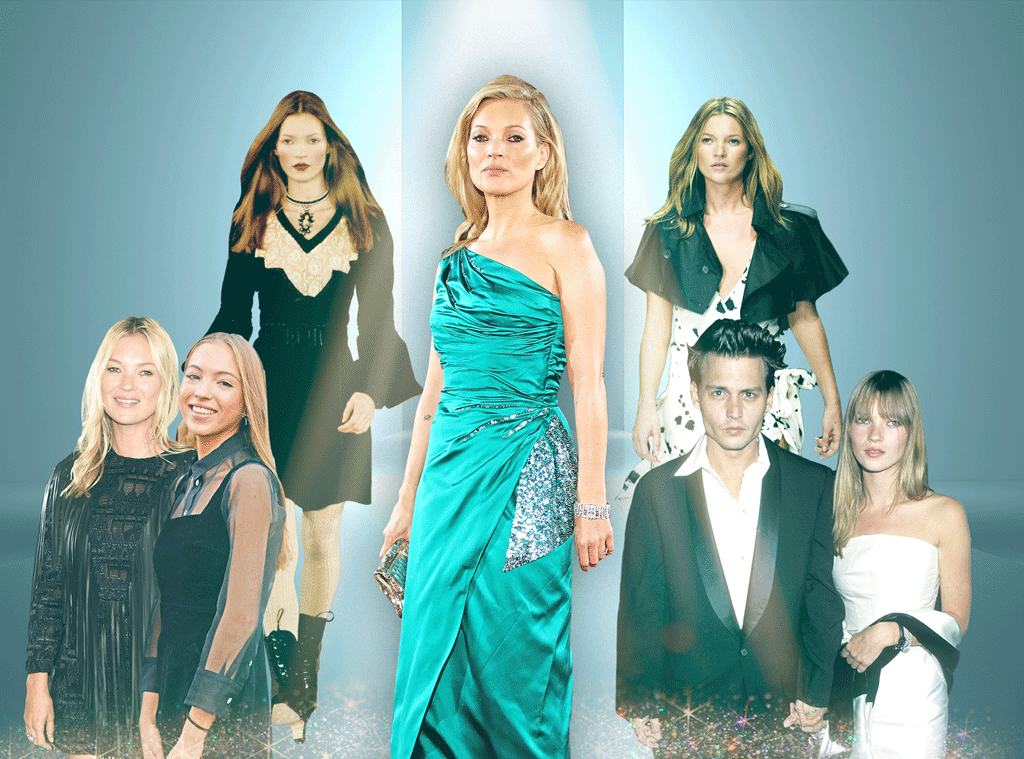 At only 5’7″, Kate Moss wouldn’t have been the obvious choice to become the defining model of her generation.

“I said, ‘Well, I think she’s gorgeous, but she’s really little. I have a feeling that she may not work a lot,'” stylist Paul Cavaco recalled to Vanity Fair about first meeting Moss years beforehand. “So I completely called it wrong. I just loved this child. When she came to my office, I would measure her to see if she’d gotten any taller.”

Hitting at just the right time and with just the right look—in fact, she determined what “the look” would be—the London-born daughter of a barmaid who didn’t think she was photogenic and a father whose job at an airline proved instrumental to his daughter being discovered hasn’t been out of the spotlight, for better or worse, since being discovered at 14.

One of Moss’ mottoes may be that “everything passes,” but the 45-year-old style icon herself is proof that not everyone goes by the wayside.

“I’m still working and I enjoy it, just traveling and doing the same,” Moss said, her warm, slightly nasal granny voice reminiscent of David Beckham‘s in that you’re surprised that modest cadence is coming from such an iconic figure, in a rare TV interview on Today last September. While her proposed next chapter held more work for her as head of her own eponymous talent agency and as an ambassador for Japanese skin care brand Decorté, it also still held a whole bunch of modeling jobs. 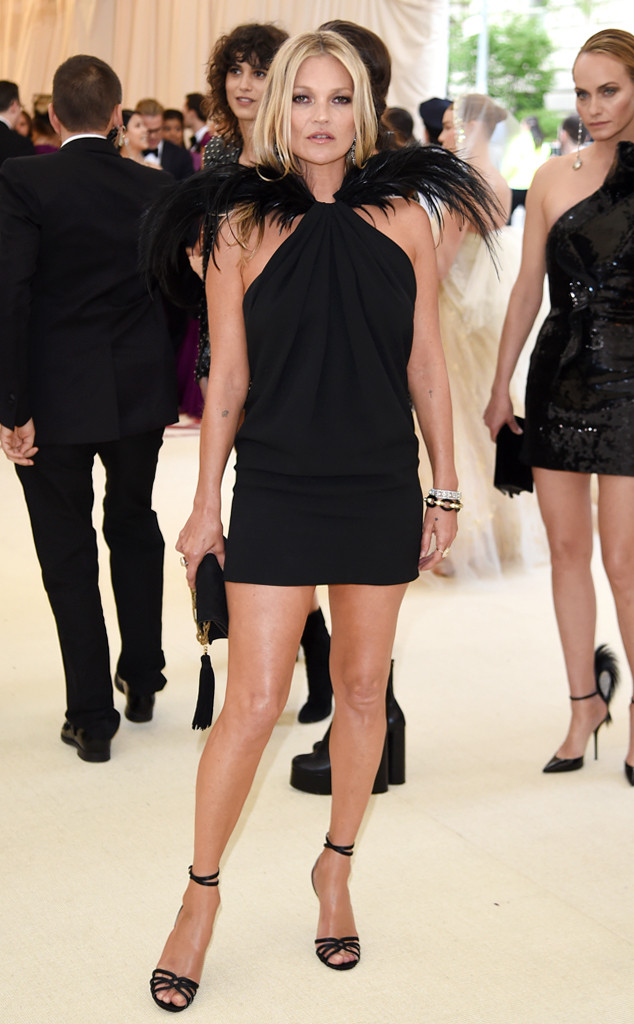 “I don’t even know what I’m doing,” Moss, still a top supermodel at the ancient fashion age of 38, told Vanity Fair in 2012. “It’s an instinct. I mean, there’s a certain breakdown now, after all this time. I can put on a dress, but still I don’t know. Nobody tells you what to do. So I have to feel, without any words, what they want and where the light is, and what the makeup’s doing, and how I’m going to make it work. It is a puzzle all the time, I think. That’s what’s good about it.”

Moreover, decades-old images of Moss keep finding new life as designers continuously turn to them for inspiration to sell their new stuff, perhaps as a nod to a simpler time (that wasn’t actually simple at all)—or to at least what the fiercely private Moss feels was a “freer” time, before the age of social media and judging everyone for everything. Not that people didn’t do that in the 1990s, and the 2000s, but Twitter outrage was at least still in the future.

Moss was 14 when she was discovered flying standby on Pan Am from New York to London after a vacation with her dad, who worked for the airline. 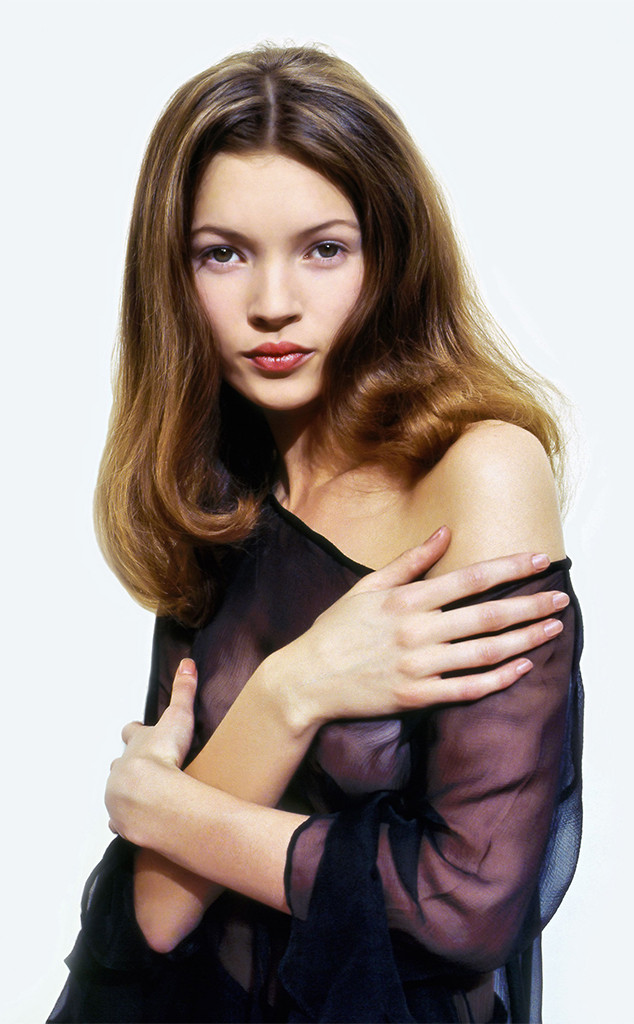 Storm Models founder Sarah Doukas went up to the teen at JFK International Airport and asked, “Have you ever thought about modeling?”

The rest really was history, although in hindsight, at such a young age (and with her mother not really on board) more was thrown at Moss than any child should have been expected to handle.

As a kid she got to travel a bit with her father to far-flung locales like Miami and San Francisco, and she liked dressing up her brother in girls’ clothes, an early indicator of her interest in fashion, but she wasn’t dying to model, per se. “What I wanted to get out of was the whole thing of, this is it,” she told Vanity Fair in 2012. “This is what life is. I never had that feeling of, that’s your lot.”

By the age of 15 she was a regular at some of London’s most exclusive nightlife spots—but older boys knew she was young and didn’t mess with her, she has said. Moss left school at 16 and that summer, in 1990, Corinne Day photographed her on the beach, clothed and in various states of undress, for the hip lifestyle monthly The Face. The end result ultimately endeared Moss to the likes of Marc Jacobs and Calvin Klein, the latter of which signed her to an eight-year contract after one meeting.

At the same time, being asked to take her clothes off for a photo shoot for the first time was a traumatic experience, something she couldn’t imagine allowing her own daughter Lila, now 16 and a budding model, to do. “I did not like it at all,” she remembered on Today. But “that was…you know, that was the job. So I kind of just did it.”

“That picture of me running down the beach—I’ll never forget doing that, because I made the hairdresser, who was the only man on the shoot, turn his back,” Moss told Vanity Fair. At the same time, she added, her own palpable youthful exuberance in those early shots also reminded her of Lila. 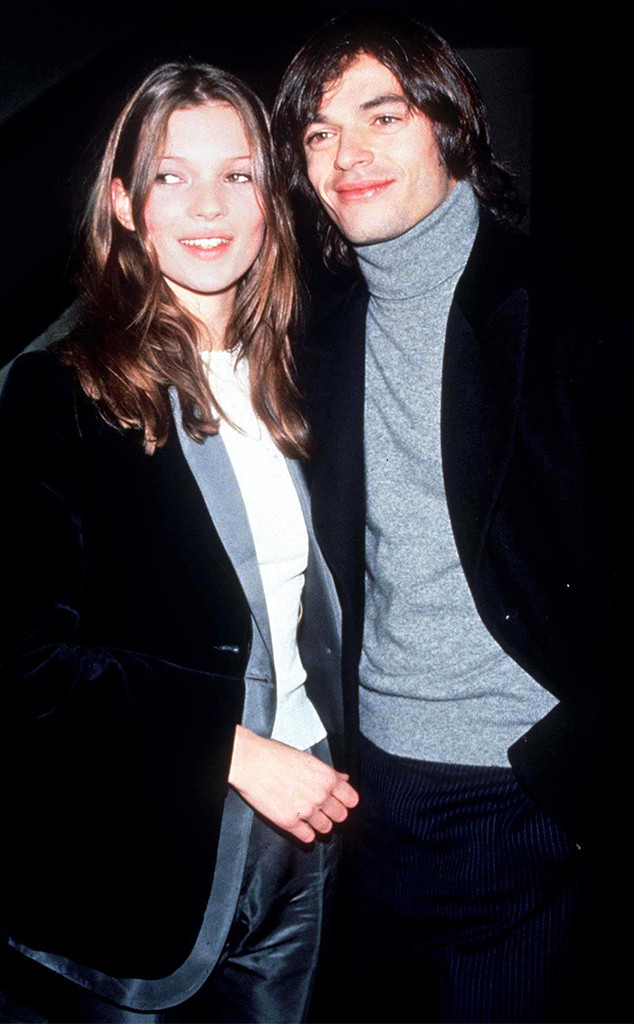 A couple of years later, Moss posed for what would become one of her many iconic ad campaigns, Calvin Klein’s Obsession fragrance, with her boyfriend at the time, photographer Mario Sorrenti.

“It was young love,” Moss recalled the 1993 black and white campaign, shot when she was 18 and which included a photo of her lying naked on a couch, to Today. “We were so innocent and young and so excited about the work, about everything. Everything was so new to us.”

The couple met on a modeling job in 1991. “I think it was something really cheesy like a hair product or Dentyne,” Sorrenti told British Vogue last year upon the release of Kate, full of previously unseen photos of his former girlfriend. “My heart just, like, stopped and I kind of clammed up. I was shy and didn’t have a lot to say. But she was very sweet and talkative.”

“Kate, as a model, started to look at what she did differently because, I guess, she started to understand the passion behind photography,” Sorrenti said. “Slowly our knowledge of it grew together.”

And “obsession” was the name of the game, according to Moss.

She and Sorrenti broke up in 1992, but stayed friends. 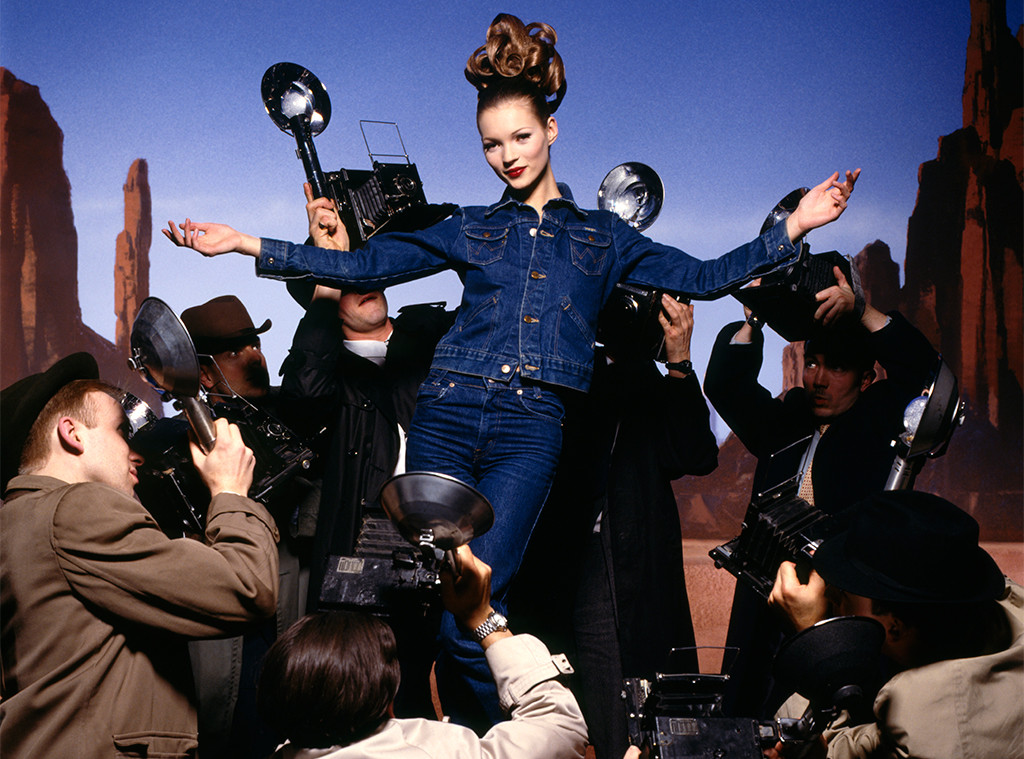 And that may have something to do with being in a business where everyone wanted a piece of her and people were capitalizing on her face and body when she was still just a teenager. She had to protect herself somehow, and just working diligently and earning top dollar—$400,000 for a day-long shoot at one point—was a way to do that. 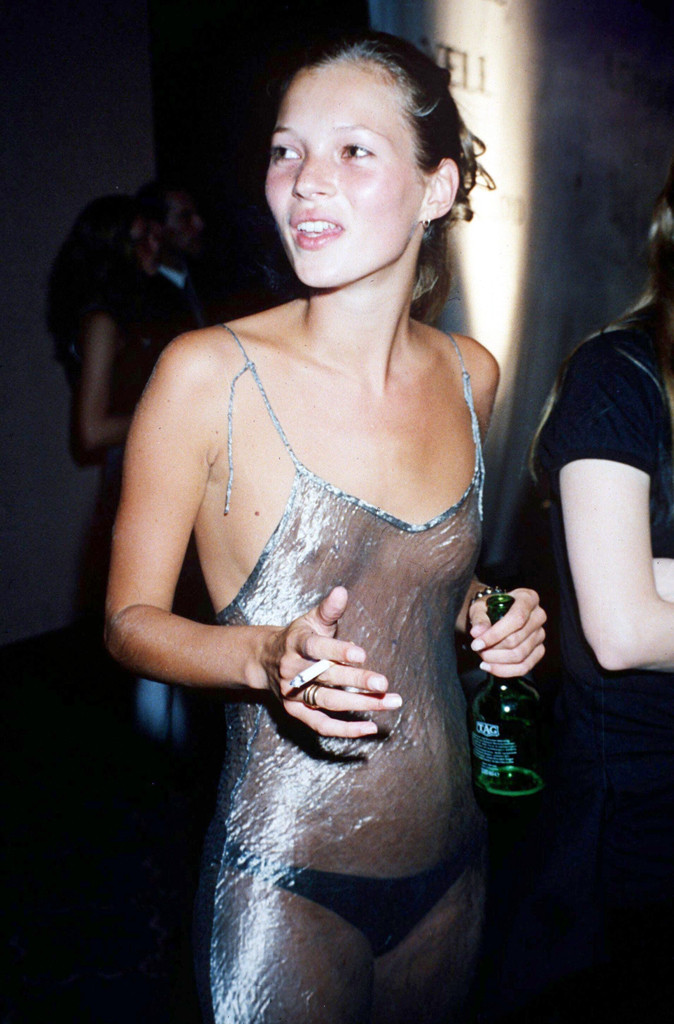 “The way a journalist can judge a person really spooks me…I started doing interviews when I was 17, when I signed with Calvin,” Moss, still only 24, told i-D, explaining why doing interviews still freaked her out. “Sometimes the interview can get really deep about everything and I’m like, ‘Really, I’m just doing a job.'”

She noted, “People ask me: ‘Do you consider yourself to be an icon?’ Do they really think that I sit around considering things like that every day?!” While promoting the 1995 art book Kate, she recalled, she did 27 interviews in one day and “I was just meat ready to be slaughtered. Some people said really nasty things just to get me riled up. I was laid out for them and they went for me.”

Over a decade later, after her incredibly eventful ’00s had passed, Moss hadn’t changed her mind about the perils of interviews. 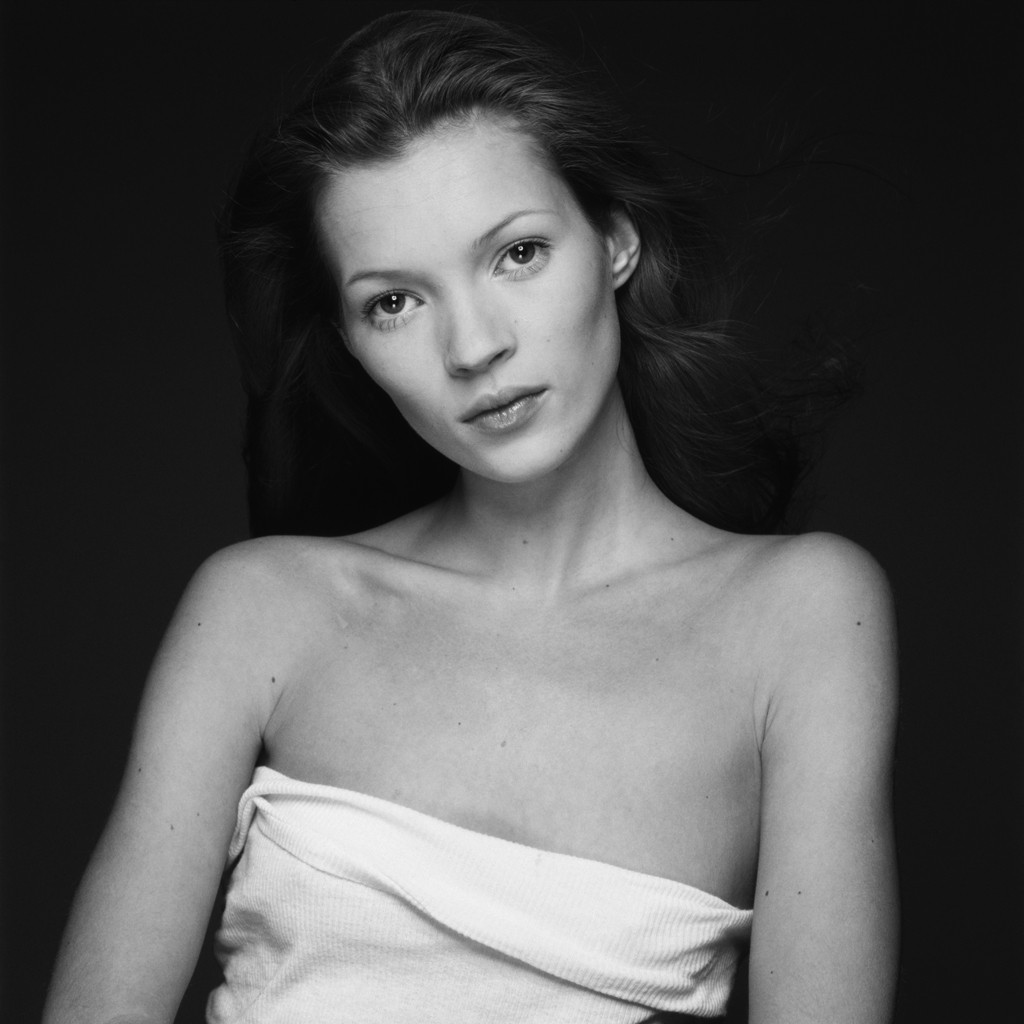 She told T magazine in 2010 that she simply hated doing them.

“When I used to do interviews a long time ago, I used to get very ill just worrying about them before they came out,” Moss said. “I just didn’t like it.

“When I first started out I did press because I wasn’t really aware that they would write something really horrible but then they did, and I was like, ‘Oh no, I don’t want to go back there. I don’t really want to open up myself to that kind of criticism.’ And I think that a lot of the time you walk in a room, they already know what they want to write about you, so it doesn’t matter what you’re like. But sometimes I will do it if I like the person or the project.” 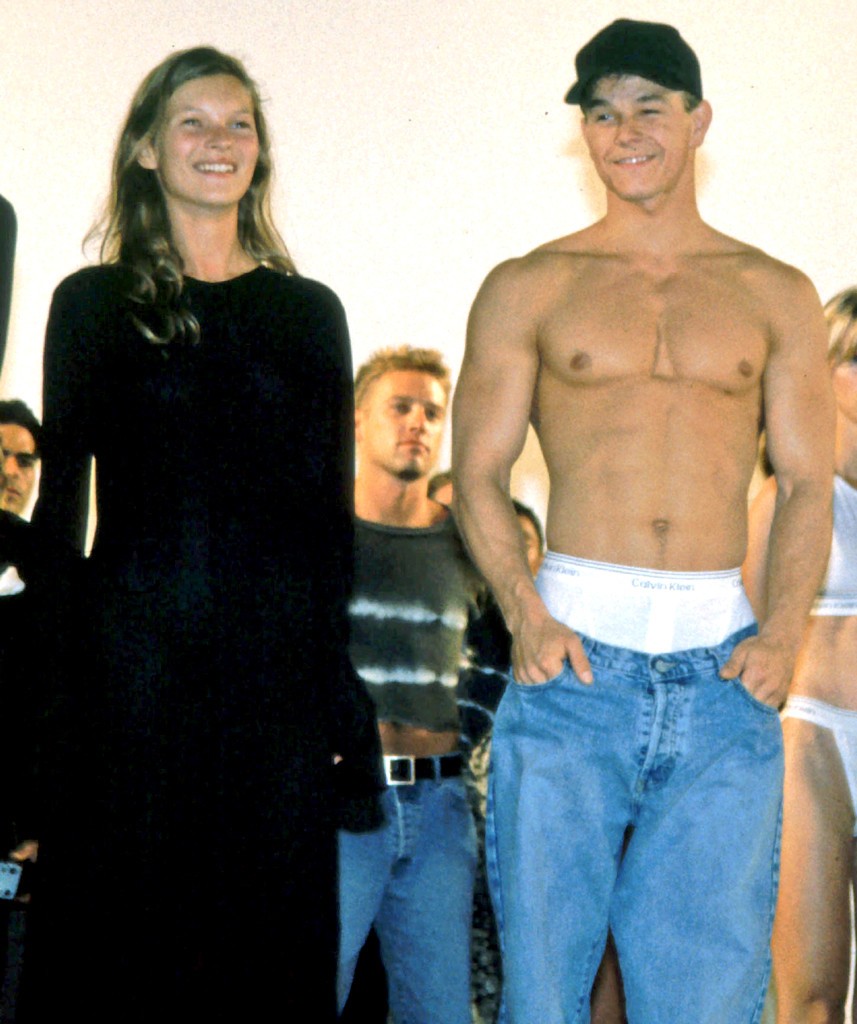 “I had a nervous breakdown when I was 17 or 18, when I had to go and work with Marky Mark and Herb Ritts,” she told Vanity Fair in 2012, referencing the pop culture history that was when a shirtless Mark Wahlberg and Kate posed in their Calvin Klein undies. “It didn’t feel like me at all. I felt really bad about straddling this buff guy. I didn’t like it. I couldn’t get out of bed for two weeks. I thought I was going to die.

“I went to the doctor, and he said, ‘I’ll give you some Valium,’ and Francesca Sorrenti [Mario’s mother], thank God, said, ‘You’re not taking that.’ It was just anxiety. Nobody takes care of you mentally. There’s a massive pressure to do what you have to do. I was really little, and I was going to work with Steven Meisel. It was just really weird—a stretch limo coming to pick you up from work. I didn’t like it. But it was work, and I had to do it.”

(Incidentally, she agreed to VF‘s close-up look at her life in 2012 primarily because she was close to the writer’s wife.)