Secrets of Britain’s most romantic stately pile: How the Manners sisters’ VERY grand home Belvoir Castle went from old-fashioned to fairytale – thanks to a series of influential Duchesses

A sneak peek behind the scenes at Belvoir Castle has revealed how a series of powerful Duchesses masterminded its transformation from ‘old-fashioned’ stately pile to Britain’s most romantic castle.

Property expert Phil Spencer was given a tour of the property by the current lady of the house, the 11th Duchess of Rutland Emma Manners, on his Channel 4 show Phil Spencer’s Stately Homes, and learned how her spirited predecessor set about turning it into a ‘fairytale castle’ after arriving at the ‘dull and boring’ Belvoir as a teenage newlywed in 1799.

He discovered how the fifth Duchess and her husband John Henry Manners sold the equivalent of £283million worth of land and property to turn Belvoir into their neo-Gothic dream home, played host to King George IV, and – in a sign of their lavish tastes – ploughed through 1,600 bottles of wine and 46 gallons of port and rum at the two-week long bash they threw to mark the Duke’s 21st birthday.

Phil was also shown a secret panel in the property’s spectacular Elizabeth Saloon – ostensibly for keeping cameos or miniature portraits, but more often used to stash notes where secret lovers could find them.

The current occupiers of Belvoir House are no less glamorous than their predecessors – with the Duchess’ daughters, Lady Violet, Lady Alice and Lady Eliza, once dubbed the ‘real-life Crawley sisters’ in a nod to TV’s Downton Abbey. 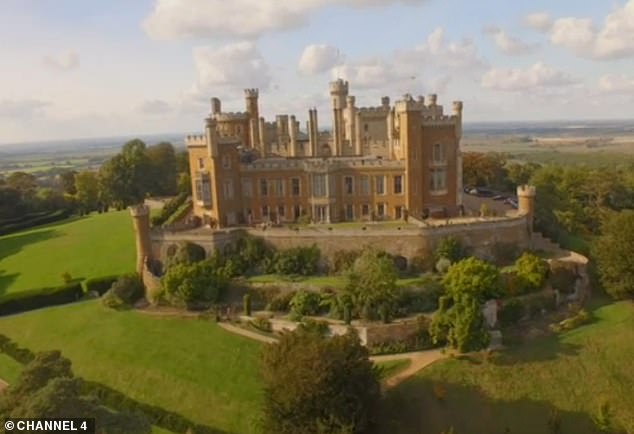 TV’s Phil Spencer delved into the history of Belvoir Castle, the family seat of the Duke and Duchess of Rutland and their five children, on his Channel 4 show Phil Spencer’s Stately Homes – and discovered how women have been pivotal in its journey from old-fashioned house to fairytale castle 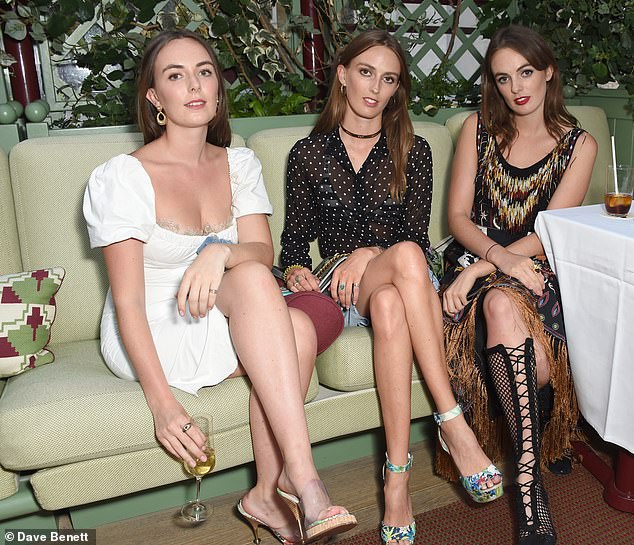 Emma Manners told Phil how she feels a special connection with the fifth Duchess Elizabeth, and regards her as her ‘absolute mentor’ and ‘icon’.

‘Everything about this building is because of this wonderful woman, Elizabeth, the fifth Duchess,’ she said.

‘She arrived at 18 and decided the building was dull and boring, [she] wanted it to be a flamboyant castle,’ said the Duchess.

‘She’s my absolute mentor, I adore everything she did. This is her castle… and she found me to finish off the job.

‘She’s here with me, all the time,’ she told Phil. 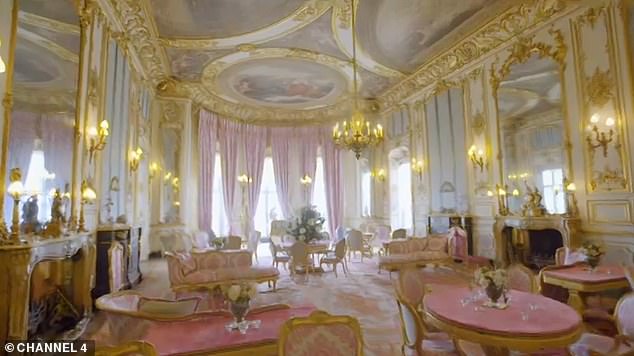 The stunning Elizabeth Saloon inside Belvoir Castle in Leicestershire. The fifth Duchess Elizabeth and her husband, John Henry Manners the fifth Duke of Rutland, were heavily influenced by trips to Paris when rebuilding the 18th Century property 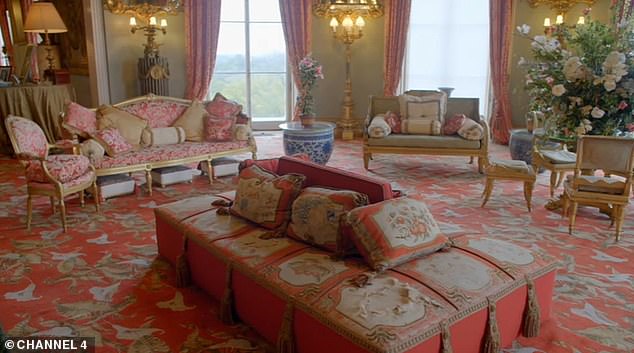 A spectacular sitting room at the Leicestershire property, which is where the Manners sisters Lady Alice, Lady Violet and Lady Eliza – once dubbed the real-life Crawley sisters in a nod to TV’s Downton Abbey – grew up 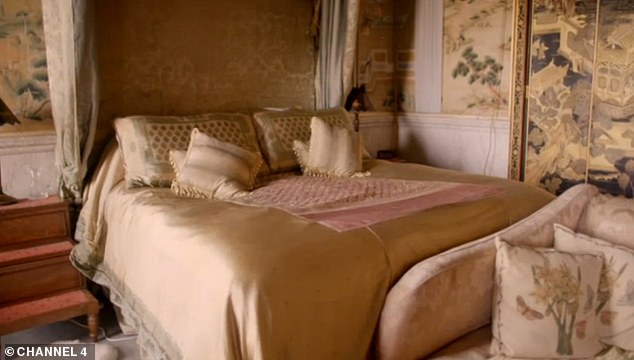 One of the palatial bedrooms inside Belvoir Castle, many of which feature hand-painted wallpaper and discreet bathrooms – which were added at great expense by the eighth Duchess of Rutland, Violet, who wanted to ensure they did not detract from the property’s spectacular interior features 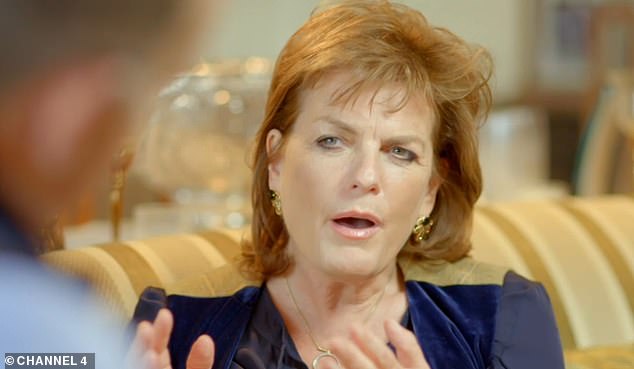 The 11th Duchess of Rutland Emma Manners, seen in conversation with Phil Spencer on the Channel 4 show, revealed she feels a special connection with her predecessor, who set the wheels in motion for how Belvoir Castle looks today

The fifth Duchess Elizabeth and her Duke John Henry, who sold land and property worth £283million in today’s money to fund their fairytale castle, took inspiration from their trips to Paris for the interiors of their spectacular home, an influence seen in the Louis XVI-inspired Elizabeth Saloon – location of that secret panel.

Conservation architect Liz Smith told Phil on the show: ‘So the theory was that this was used for miniature portraits, cameos, things like that… [but there was] a rumour too that people would leave love letters here, and hide them behind the panels.

‘People would come in here for their drinks, write a note to their lover and tuck it in behind the wall panel,’ Liz explained.

In the same room, a ceiling mural depicting the myth of Jupiter and Io had had to be repainted, Liz told Phil, because Jupiter originally bore too strong a resemblance to the then Duke of York, with whom Elizabeth was reputedly having an affair.

‘They went back and added a beard,’ she told Phil.

The fashion-conscious Elizabeth and John Henry had set about creating a bespoke castle designed for receiving guests on a ‘massive scale’, Phil said on the show, including a suite of three rooms – still known as the King’s Rooms – installed specifically to host the monarch. 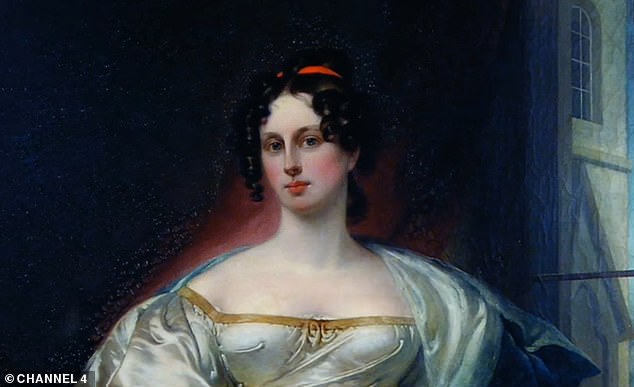 The fifth Duchess, who the now Duchess of Rutland Emma Manners describes as her ‘absolute icon’, arrived at Belvoir as the 18-year-old newlywed wife of John Henry Manners – and is said to have found it ‘dull and boring’ 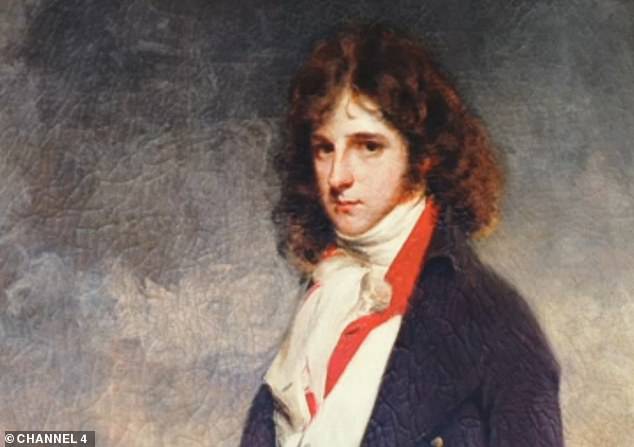 When the fifth Duke of Rutland John Henry Manners turned 21, the party lasted two weeks – and guests consumed some 1,600 bottles of wine

Evidence of their taste for lavish entertaining lies in the castle archives, with the cellar books from 1806 to 1807 indicating that more than 2,500 bottles of wine were consumed within that period alone.

The Duke would also inform the Leicestershire Militia band what time he wanted guests to gather for breakfast, and they would bang the drums accordingly to alert people staying in the castle – and give them time to get back to their allocated rooms should they have wandered into somebody else’s overnight.

But it wasn’t all parties, Phil learned.

In 1816 – when the Duke and Duchess’ building works were three quarters complete – a ‘devastating’ fire tore through Belvoir, and 115 irreplaceable paintings – including works by Van Dyck and Rembrandt – were lost.

John Henry wrote in his diary of a scene of ‘ruin, desolation and horror’.

‘To say the extent of our loss is impossible,’ he wrote. ‘The calamity is heavy indeed.’ 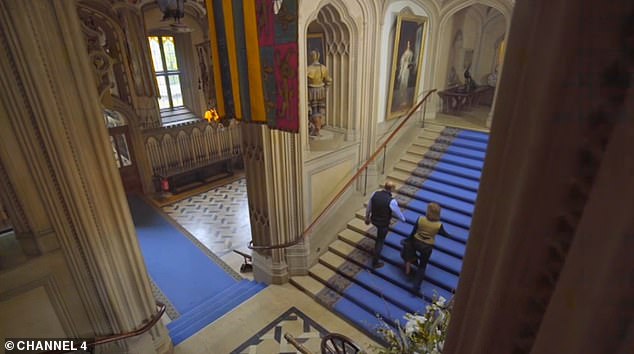 Phil Spencer was given the grand tour by Emma Manners, the 11th Duchess of Rutland, who is spearheading her own restoration works at the stunning property, which she reveals costs £500,000 a year simply to keep up and running 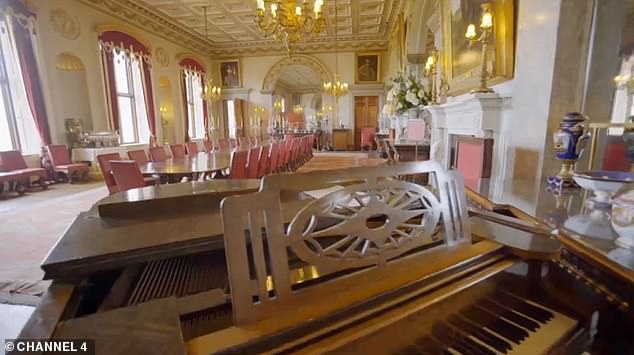 ‘This is the legacy of a visionary Duchess,’ says Phil of the plans set in motion by the fifth Duchess, who died suddenly after suffering a burst appendix at the age of 45 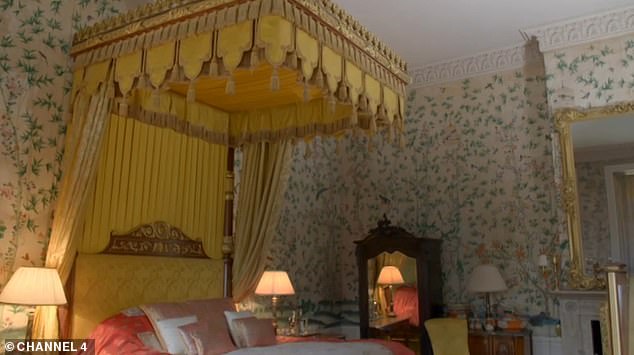 The Manners sisters are familiar faces on the London party circuit, and Belvoir Castle plays host to many a modern party – apt given its history as home to a young and glamorous couple determined to entertain Regency society in style 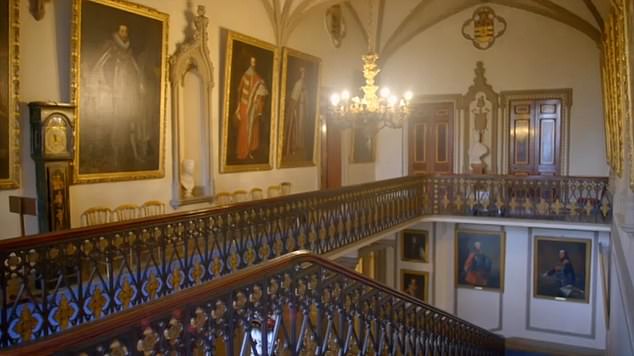 Paintings line the hallway overlooking the staircase at Belvoir Castle. Hundreds of priceless artworks by some of the world’s greatest artists were lost forever in a devastating fire at the property in October 1816 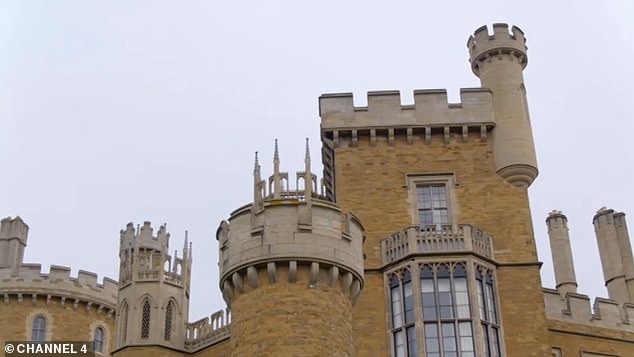 After arriving at Belvoir in 1799, the teenage Duchess decided she ‘didn’t want a classic stately pile like everyone else’, she wanted a fairytale castle, and plans were drawn up to redesign the home in the neo-Gothic style. More than a dozen new turrets and towers were added 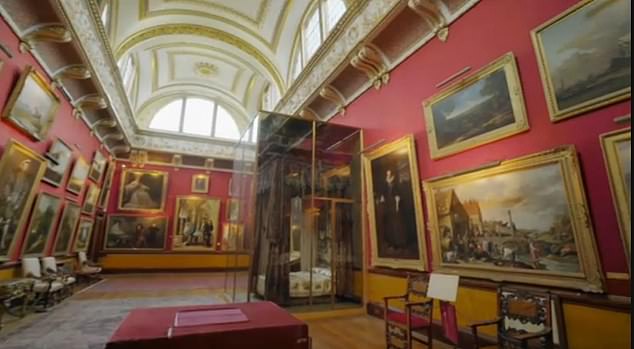 Emma Manners says of her ‘icon and mentor’ Duchess Elizabeth: ‘This is her castle… and she found me to finish off the job. She’s here with me, all the time’

Undeterred, John Henry – who had previously sold off swathes of land and property to fund the renovation project – sold a further chunk worth £8million in modern money so that work could continue.

Elizabeth, who had nine children, died suddenly aged 45 of a burst appendix in 1825, when the couple’s dream home was almost completed.

Later Violet Manners, a ‘liberal intellectual and talented artist’ who became the eighth Duchess of Rutland in 1906, took over the baton of modernising Belvoir – while respecting the spectacular interiors masterminded by her 19th Century predecessor.

She installed electricity, telephones and servants’ bells, as well as a dozen new bathrooms – all of which had to be discreetly hidden away so as not to detract from the splendour of the state rooms, Phil discovered on his tour. 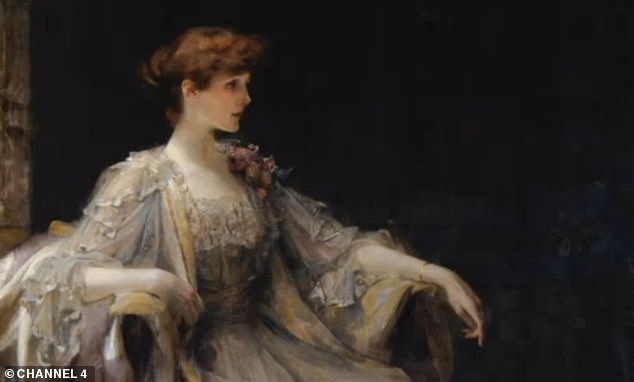 It was the eighth Duchess of Rutland, Violet Manners, who set about modernising Belvoir Castle in the early 20th Century, adding ‘discreet’ bathrooms, electrics and a telephone 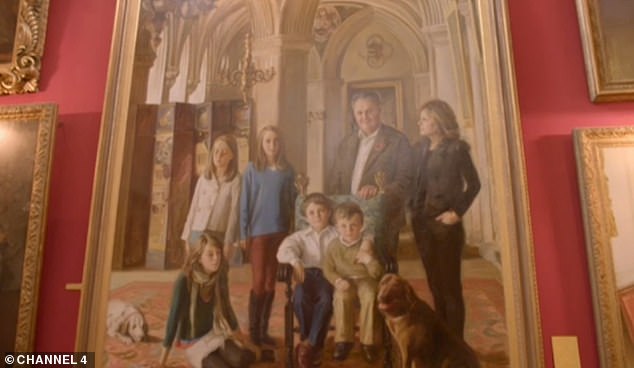 The Duke and Duchess of Rutland, David and Emma, are seen with their five children; Lady Violet, 25, Lady Alice, 23, Lady Eliza, 21, Charles, Marquess of Granby, 19, and Lord Hugo Manners, 15

Today the baton has been passed to the 11th Duchess, Emma Manners, who revealed she was as ‘terrified’ as her original predecessor when she arrived at Belvoir in 1992.

‘My background is I’m a farmer’s daughter from mid-Wales,’ she told Phil.

‘I don’t ever think I’m really a Duchess… people say to me “your Grace”, and I think, actually, I’m Emma Watkins.’

But the Duchess said she’s determined to preserve the history of Belvoir while protecting its future, and told how it costs £500,000 a year ‘just to keep it rolling’.

‘If I was able to leave it financially secure for my son, I’d really feel I’d ticked a box,’ she said on the show.