Wearing Hufflepuff colours and waiting for her stage cues, Kirsty Marillier would attempt to create magic with words in the dressing room of Harry Potter and the Cursed Child.

Her completed work will appear on stage next year, the first of seven new Australian plays to feature at Griffin, Sydney’s theatre for first chances.

“Like the best and worst parts of our locked-down 2021, Griffin’s 2022 season is all about exciting, unexpected clashes. The mundane with the euphoric, the comic with the absurd,” artistic director Declan Greene said on Monday. 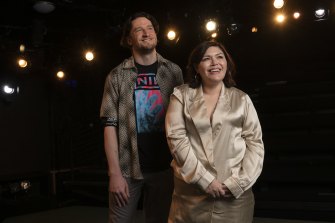 Marillier’s Orange Thrower, a clash of cultures story inspired by some of the “drabbest parts of Australian suburbia”, opens the season.

“I started thinking about the architecture and structure of these places, and how as a young person – specifically a young person of colour – I’d had the life sucked out of me. I then built a fictional world for the play to be based in, and once I did that, it seemed necessary to write a coming-of-age tale,” Marillier said.

“A large chunk of writing time took place in my dressing room while playing understudy roles in Harry Potter and the Cursed Child over in Melbourne. The stability of this job meant I was able to write without stress, without time constraints or deadlines. I could just write freely – often hunched over my laptop, dressed as a Hufflepuff, mouthing the lines of my new, baby characters.”

In total Griffin will stage 10 works, including two for the Sydney Festival. All but one of Griffin’s six main season shows have been written by actors for the stage.

Griffin will stage a second run of Blaque Showgirls, written by Nakkiah Lui, that debuted at the Malthouse Theatre in 2016.

Lui wrote the play as an emerging playwright before Sydney Theatre Company’s production of Black is the New White brought her acclaim and comparisons with Australian theatre icon David Williamson.

“Instead of taking a classic and making it mine, I wanted to change the idea of what we view as classics and be a little subversive about it because the classic to me isn’t a Shakespeare or an Ibsen,” she said.

Lui took the 1995 sex exploitation film Showgirls, panned for its scandalous nudity and its overacting, and gave it a subversive twist out of “sheer defiance, and rebellion and taking the piss, the great Australian way”.

At Melbourne’s Malthouse, the show sold out. Lui still gets messages from audience members who saw it five years ago and loved it.

“I did think it would have another second life, but it’s taken a while. It’s my favourite play I’ve ever written so I’m very excited to revisit it.”

Pandemic lockdowns have not left Griffin unscathed, despite the support of donors who rallied around the Darlinghurst-based theatre company.

While Greene says 2022 will be a year of belt-tightening, Griffin has chosen not to cut back its season and will instead stage fewer individual nights.

Greene holds fast to the principle that Griffin is the theatre of first chances. Dylan Van Den Berg’s Whitefella Yella Tree is a love story between two boys set during the settlement of Australia.

Van Den Berg is the winner of the 2020 Griffin Award, the Rodney Seaborn Playwrights Award, and the Nick Enright Prize for Playwriting at the NSW Premier’s Literary Awards.

Black humour abounds in Ghosting The Party by Melissa Bubnic which explores issues around assisted dying across three generations of women.

Merlynn Tong’s Golden Blood completes the season, a play set in Singapore where cracks grow between two newly orphaned siblings, one of whom turns out to be a real-life gangster.

The Booklist is a weekly newsletter for book lovers from books editor Jason Steger. Get it delivered every Friday.