“As early as I can remember, I knew I was different,” says Wanita, the country music singer at the centre of the documentary that bears her name. She doesn’t just mean she knew she was destined to be a star, although she was convinced of that as well. “The way I’ve described it in the past, I always felt like my head was severed and in a microsecond was put back again, but I had to live my life with this slight bit of light that had passed through it, that extra scope I got to see in that microsecond. A bit of a funny way of putting it. But imagine your head being severed.”

Matthew Walker’s I’m Wanita sets off down a familiar trail: a middle-aged singer from the wrong side of the tracks, whose big dreams have been sadly disappointed, makes a final bid for the fame that has eluded her. You could probably find dozens of people who could tell you that story just in Tamworth, where Wanita Bahtiyar – her full married name – is based. 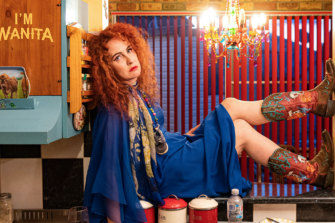 “As early as I can remember, I knew I was different.” Wanita BahtiyarCredit:Sydney Film Festival

I’m Wanita is both stranger and stronger than that suggests, however, partly because she is such a huge, maddening and unpredictable character, partly because Walker sticks with her through adventures far grimier than the manufactured tiffs and faux debauchery of most music documentaries and partly because she really can sing, albeit in a style reminiscent of Loretta Lynn that isn’t much in vogue. But since when was country about being in vogue?

Wanita is up-front about being neurodivergent, perhaps in several ways. She described herself in the film as autistic and dyslexic; she tells me that she has OCD and that, except when it comes to music gigs, she is “a bit agoraphobic”. Having secured the funds to go to America to record her current album – shadowed by Walker, of course – she has escalating rows with her manager about her binge-drinking, argues mightily with the session musicians, then goes out and happily plays for hobos hanging on a street corner.

People do think she’s difficult, she agrees. “Because I haven’t been able to conform. But I’m not. All you have to do is tell me what to do and I’ll do it. Leave me to my own devices and I’ve got no idea.” There are times during I’m Wanita when you wonder how Walker did it.

He hesitates to say too much. “I guess a lot of the process was understanding Wanita’s perspective on things,” he says. “And understanding how to react around her; at a certain point. I could always fall back on the fact she’s a queen and if you treated her as a queen, then everything went very, very smoothly.”

Life certainly hasn’t gone smoothly for Wanita herself. Without a manager or any management skills of her own, she hasn’t been able to parlay good reviews for her self-produced album The Original Wanita, out on Spotify since 2013, into a real career. She worked in a chicken factory, then turned to sex work. Her late husband Baba, whom she met in Turkey when she went there to meet and marry his son, drove her to meet clients at out-of-town hotels.

We see something of Baba in the film; he was happy to be interviewed, although Walker had to rely on a succession of translators – starting with the local kebab shop-owner – to translate the dialect of Turkish he spoke. He didn’t speak any English. “I loved that process because I had no idea what he was saying until I was editing, so there was this element of the unknown and chaos,” says Walker. “I love that.” What we see of Baba’s relationship with Wanita is a puzzle, but they seemed happy with each other.

Her relationship with her daughter is much worse; Ellie May, interviewed three times over six years, supported the film and her mother’s musical aspirations but, by the time she was 25, no longer wanted to be involved with either. “When I see her on camera I’m so proud of her; I love her and I just want to cuddle her and that will never change,” says Wanita. “She just has difficulty being around me. That’s her decision. I just hope she makes changes in her attitude to me before it’s too late.”

As she says, nothing has come easily to Wanita. “I have a psychiatrist and a psychologist and they both say I’m the most extreme example of PTSD they have seen,” she says. “Primarily the sex work, but everything in my life that has come my way, I have given blood for. Anything I’ve managed to achieve I’ve had to literally rip the guts out of it and hold on for dear life.” On stage, though – no matter how modest that stage may be – the self-styled Australian Queen of Honky Tonk is in charge, an old-school trouper out to give the punters a good show.

“I always liked being the centre of attention,” she says. “Not out of vanity. I wanted to be famous to help more people” – she is a generous collector of waifs and strays, some of whom live with her – “and do things on a bigger scale. I’m a purist, I’m an artist. And what you see is what you get. The way I am now is exactly the way I was in the film. When the green light’s on, it’s green, When the red light’s on, it’s red. There’s no bloody orange.”