One person was killed and three others were injured Sunday in a shooting at an off-campus party near Southern Illinois University in the city of Carbondale, officials said. Keeshanna Jackson, an 18-year-old freshman at the school, was identified as the victim killed on Sunday.

The Carbondale Police Department said officers responded to calls of shots fired around 3 a.m. Sunday morning at a residence where a party was being held. Police said the officers discovered a victim with a gunshot and attempted to resuscitate her. She later died at a nearby hospital.

Police said the three people injured — Jyrin Blair, 29; Raheem Sylas, 23; and an unidentified minor — brought themselves to the emergency room of the same hospital where Jackson died. They were treated for non-life-threatening injuries and later released.

Police believe multiple shooters were involved and said the investigation is ongoing. 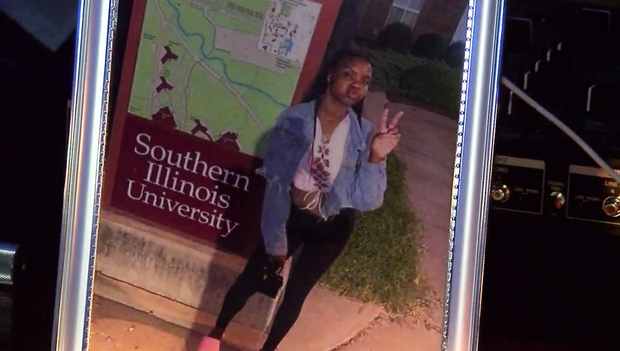 More than 100 students from the university held a vigil for the young woman killed in the shooting, CBS affiliate KFVS-TV reported. Her family and friends said she arrived on campus on August 16 and wanted to attend school to learn how to expand her nail business.

“She meant the world, that was like my right-hand man. She would call me all the time, I would call her. She called me with her problems, I called her with my problems,” Gakyla Mayo, a friend of Jackson, told the station.

“Now, it’s like she’s gone and who else am I going to talk to about that type of stuff with?”