Furious community leaders have accused the federal government of imposing “racist” jail terms on Australians who return from India amid a wider row over the secrecy involved in the emergency controls on citizen rights.

Prime Minister Scott Morrison is also facing growing unrest among government MPs who want the sanctions eased as soon as possible out of concern that the “extreme” measures impose great hardship on the community. 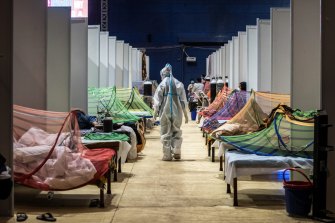 A medical worker in PPE observes patients who have been infected by Covid-19 inside a makeshift covid care facility in a sports stadium at the Commonwealth Games Village in New Delhi on Sunday.Credit: Getty Images

Indian leaders said they were “blindsided” by the government announcement at midnight on Friday night when they had been in meetings with federal ministers earlier that day and heard no suggestion of the coming move.

The decision invoked the Biosecurity Act to impose a ban on travellers entering Australia if they have been in India in the previous 14 days, triggering fines of up to $66,600 and jail terms of up to five years for those who break the rule.

Dr Jagvinder Singh Virk, chairman of the India Australia Strategic Alliance and a long-term Liberal Party member, said community members felt like second class citizens with the White Australia Policy running “under the radar” decades after it was formally ended.

“People are feeling it’s racist. What is happening to Australia?” he said. 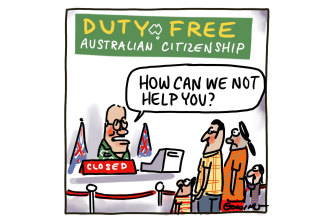 Infections in quarantine have grown from 14 in February, to 38 in March, and 210 in April, he said. The proportion of those cases coming from India also grew, from 8.8 per cent in February to more than 56 per cent just before the decision was made to halt flights.

University of Canberra professor Kim Rubenstein, an expert on citizenship law, said the controls were at the “outer reaches” of what people should expect from a democratic government.

NSW Liberal Senator Concetta Fierravanti-Wells said the move highlighted the problem of ministerial decisions that could not be disallowed by Parliament and did not receive enough scrutiny.

“I am troubled by the decision to make it illegal for Australians to return home to Australia,” she said.

Senator Fierravanti-Wells, who chairs the Senate committee that scrutinises delegated legislation and regulation, has previously warned against the growing number of decisions that are exempt from parliamentary scrutiny.

The committee recommended last December that Biosecurity Act decisions such as the Indian ban should be subject to debate and disallowance in Parliament.

Foreign Affairs Minister Marise Payne said on Sunday the move was based on health advice while Chief Medical Officer Paul Kelly said on Monday morning it was not his decision to impose the fines and jail terms.

“There was no advice given in relation to fines or jail terms, that’s just how the Biosecurity Act works,” he told ABC’s Radio National.

Professor Kelly’s letter of advice, however, recommended the move on Friday and spelt out the penalties for breaching Section 477 of the Biosecurity Act including the jail terms and fines.

The letter was not released with the government’s press release at midnight on Friday night and only emerged on Monday.

Senator Payne and Immigration Minister Alex Hawke held a conference call with Indian community leaders at 11am on Friday but did not mention the potential move, according to those in the meeting.

The ban came into effect at 12.01am on Monday and will be reconsidered on May 15.

While state governments made no criticism of the move, federal Coalition MPs are urging Mr Morrison and ministers to stop the controls as soon as possible.

“There is little doubt that this is an extreme measure and that it is causing significant hardship to the Australian Indian community,” said Dave Sharma, the member for Wentworth in eastern Sydney and a former diplomat who is of Indian heritage.

“I fully expect these restrictions will only be temporary and that enhanced powers will be used only sparingly and as a last resort.”

Queensland Liberal MP Julian Simmonds called the decision “a tough but the right call” but NSW Liberal MP Fiona Martin said she hoped the government could begin repatriation flights out of India as soon as possible.

“The travel ban and related legal penalties is quite heavy-handed,” said Ms Martin, who represents Reid in the inner west of Sydney.

“There are a lot of Australians stuck in India whom we should be bringing home as a priority.”

“I don’t think we should jail fellow Australians trying to come home, we should be actively trying to help them get out of a circumstance which has obviously gone south very quickly,” he said.

Opposition leader Anthony Albanese said the penalties on people returning from India was announced without much thought.

“The basis of that is because of the failure of the federal government to establish an appropriate quarantine system in Australia,” he said.