Dean Drommel would rather sleep rough than go back to living in a rooming house.

Mr Drommel, one of the homeless Victorians from 2159 households currently put up in a hotel, is worried he will once again be referred to a private rooming house when lockdown ends and government funding is cut. 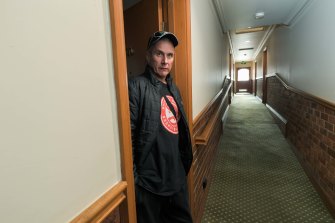 Dean Drommel is worried he will be sent back to an unsafe rooming house when lockdown ends.Credit:Joe Armao

“When you live in a rooming house and you go out to the shops and come home and the door has been kicked in and all your stuff’s been taken, it gets a bit much. You’re always on edge. I’d rather be on the street than going into a rooming house and getting into fights.”

Mr Drommel is also worried about the spread of COVID-19 at rooming houses. “I’ve been hearing about it lately; ‘this place has got COVID, go and get tested’.”

Thirty-six people living in private rooming houses have been infected with COVID-19 since June 1 and there have been repeated warnings that poor quality, unsafe accommodation is adding to homeless people’s trauma.

But in a report released on Sunday – Crisis in Crisis II – homelessness organisations from Melbourne’s north and west warn they are being inundated with requests for crisis accommodation and have no alternative but to refer homeless people to places they know are substandard and unsafe.

“The … reliance on low-end accommodation, which is rated as ‘inappropriate and unsafe’, is exacerbating the trauma experienced,” says the report by Northern and Western Homelessness Networks.

Western Homelessness Network coordinator Sarah Langmore said one homelessness service in Melbourne’s western suburbs was approached by 215 people between September 2 and 23, with shared accommodation the only option for 126 of these.

The report calls on governments to invest in self-contained crisis accommodation for homeless people while they await permanent housing.

The Victorian government has spent millions of dollars housing rough sleepers in hotels during lockdowns due to concerns over COVID-19 outbreaks among vulnerable populations unable to isolate.

“We will be working closely with a number of homelessness organisations to identify suitable housing options to transition people out of temporary hotel accommodation when lockdown ends,” a government spokesperson said.

More than 1500 Victorians from 1272 households have now been moved into permanent accommodation under the Victorian government’s $150 million From Homelessness to a Home program.

However, many homeless people end up back on the streets or in private rooming houses when lockdowns end and the funding for emergency accommodation in hotels is cut.

“Homelessness service providers just don’t have the low cost options for people to move into and that’s how people end up in these unacceptable rooming houses.”

Ms Smith said it was extremely positive that homeless Victorians from 1845 households would be helped into their own homes under the From Homelessness to a Home Program and the Victorian government was building 9300 new social housing homes within four years.

“But when you have 25,000 people homeless minimum every night in Victoria, there is clearly a long haul in front of us.”

Ms Smith said COVID-19 was now in the homeless population. “If you are in that type of close quarters that we have in rooming houses it’s a really frightening scenario to think of infection in that space,” she said.

Last month 38 residents from the John Cribbes House – a rooming house in Balaclava with shared kitchens and bathrooms – were locked down for two weeks after a COVID-19 case was found at the facility. 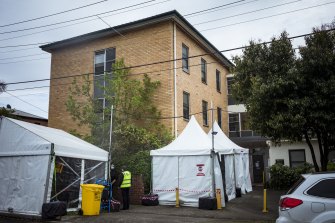 John Cribbes House in Balaclava was locked down after a COVID-19 case.Credit:Chris Hopkins

The Department of Health says it does not always publish exposure sites if it can “confidently and quickly” identify all individuals who may have been exposed.

“We have invested more than $155 million for coronavirus preparation and prevention measures in high-risk accommodation including rooming houses,” a government spokesperson said.

There has also been an outbreak of COVID-19 among residents at Ibis Styles Kingsgate, one of the hotels used to accommodate the homeless.

Bevan Warner, the CEO of homelessness organisation Launch Housing, said the From Homelessness to a Home program should be extended and people moved from hotels into more secure, assisted rental accommodation.

“We are concerned about how people will get through the next six months of the pandemic. All of the Burnet Institute modelling suggests a long tail out of high COVID caseloads among vulnerable communities until February or March,” Mr Warner said.

“What lies ahead could be the perfect storm of health and housing stress for people who are already at the margins.”