In 2008, when Q&A was new and Australia was years away from legalising same-sex marriage, the fledgling show helmed by Tony Jones was host to a memorable exchange.

Angela Shanahan, the conservative commentator, said the Catholic Church taught that gay sex was immoral, making the body merely an “empty vessel for sex”. But, she said, that did not mean gay people were not God’s children. 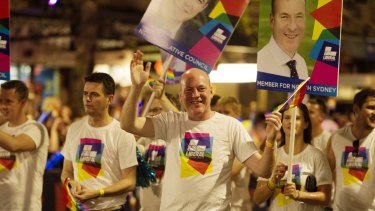 Liberal MP Trent Zimmerman was the first openly gay MP in the House of Representatives.Credit:James Brickwood

The veteran journalist David Marr, who is gay, would have none of it.

“You people have no idea how unspeakably cruel you are,” Marr said. Claims of being God’s creatures were mere “poetic nonsense” if gay people were forced to live sterile lives without sex, he said.

Thirteen years later, a different Australia, watching a Q+A that uses a plus in its name rather than an ampersand and features Hamish MacDonald rather than Tony Jones in the host’s chair, was treated to a strikingly similar exchange.

“I have no intention of repenting being gay,” the Liberal MP Trent Zimmerman pointedly told the head of the Australian Christian Lobby, Martyn Iles. “I’m wondering where you think that’s going to leave me when I leave this mortal coil?”

Beyond saying that repentance was not something demanded of only trans or gay people, Iles dodged the question. “I always say to people, the day that I found out I was a sinner, it was the best day of my life because it turned me in the right direction and made me seek God,” said Iles.

While Iles’ answer was more evasive, it seemed Australian political discourse otherwise checked into Hotel California for a moment.

But there was at least one key change evident on Thursday’s show. A decade ago, Zimmerman said, he would’ve been against quotas in the Liberal Party. But after scant progress getting women into the federal party, Zimmerman said he had changed his mind. He now wants 50 per cent of Senate candidates to be women.

(Another is that the audience member whose question prompted the Shanahan-Marr exchange, Josh Taylor, is now himself a reporter at The Guardian.)

There were three reasons why, Zimmerman said.

First, Parliament already effectively has quotas. The 500,000 residents of Tasmania get as many senators as the 8 million Australians living in New South Wales to protect the equality of Federation.

“I do think that it is hard for a man to walk in a woman’s shoes. I don’t think Martyn can walk in a gay man’s shoes as easily as a gay man. It’s that diversity and representation which makes our parliament stronger.”

Finally, Zimmerman took aim at the nebulous concept of merit.

“I have to say, in my experience – and I’ve sat through hundreds of pre-selections – that merit is usually defined by the person arguing that their selection is going to be the most meritorious.”

Was it the most professionally successful person? The one with the deepest community roots? The most committed party activist?

“So, merit is a very hard-to-define concept that I think we rely on as some given, some certain, which it isn’t,” Zimmerman said. “I think, for the Liberal Party to better represent the community, it is time that we looked at quotas.”