The toughest thing about selling a fantasy drama to a mainstream television audience is getting them over genre humps, such as dragons breathing fire, wizards casting spells and everyone behaving like they’re drinking mead by the barrel at a toxic masculinity corporate think tank. In economics, we call them barriers to entry. In television, it was just the 1980s.

Back then, it was all blood-and-boobs meets swords-and-sandals, where films like Excalibur were exalted for their artful magnificence, never mind that Morgana whips her top off and Mordred is literally skewered in battle, while lesser essays in the craft, like Dragonslayer and The Sword and the Sorcerer, were nudged off-piste, to the weekly shelves of the local video store. 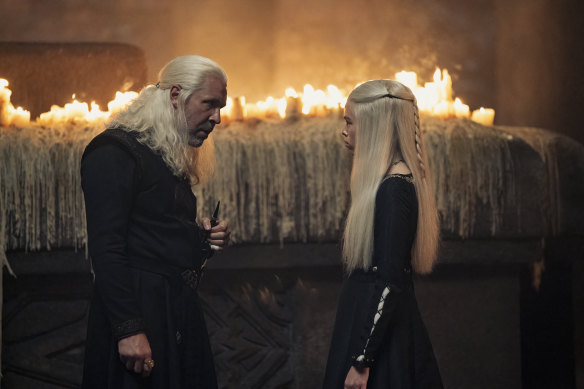 Three decades later Game of Thrones, produced for television, was transformative for the genre. It lowered those barriers to entry. A bit of Dallas meets Dungeons & Dragons, it was political and theatrical, without being either fantastical or ridiculous. Suddenly, the Breaking Bad and Borgen crowd were staying in to watch Joffrey, Jamie and Daenerys.

So, House of the Dragon comes to market as a fairly elegant package. Set almost 200 years before Game of Thrones, it presents a far simpler political paradigm. Unlike Thrones, which was a web of feuding royal houses and complex relationships, House of the Dragon has but one, House Targaryen, those white-haired wielders of draconic power.

Here, House Targaryen is at its giddy political height. The well-meaning but feeble King Viserys (Paddy Considine) sits on the Iron Throne, with no heir except his daughter Rhaenyra (Australian Milly Alcock), whom the misogynistic court will not accept, and his brother, the ambitious and excessive Daemon (Matt Smith). 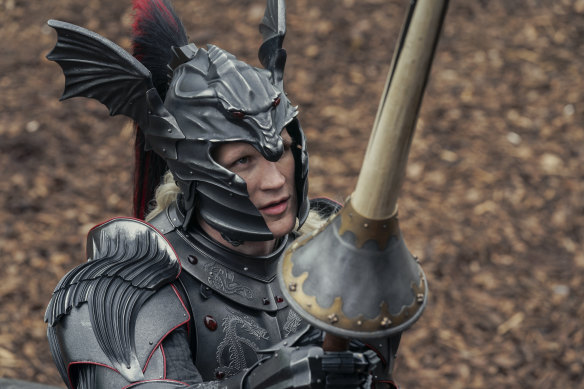 Matt Smith as the ambitious and excessive Daemon.Credit:HBO/Ollie Upton

In the shadow of the king stands Ser Otto Hightower (Rhys Ifans), the charmless palace chamberlain, who plots not just to cement his own place in the unfolding history of Westeros, but to ensure that Prince Daemon’s power is kept in check. Will he succeed? Will Westeros be torn asunder? You don’t need to have watched all 73 episodes of Game of Thrones to guess how it ends.

Game of Thrones was steered creatively by David Benioff and D. B. Weiss who, to be fair, delivered a less-than-perfect pilot, seven cracking good seasons and a final season that sent everyone’s hair as white as a Targaryen’s. House of the Dragon has a different lineage: director/producer Miguel Sapochnik, who worked on Game of Thrones, and Ryan J. Condal, something of the franchise’s Luke Skywalker to author George R. R. Martin’s Yoda.

As first episodes go, with a lot to do, House of the Dragon delivers above expectation. It is dramatically solid, if a little unsurprising. King Viserys grappling with a male preference primogeniture dilemma that is only barely solved in modern-day kingdoms, and unchecked dynasty power chipping away at both the integrity and authority of long-entrenched political institutions. Sound familiar? 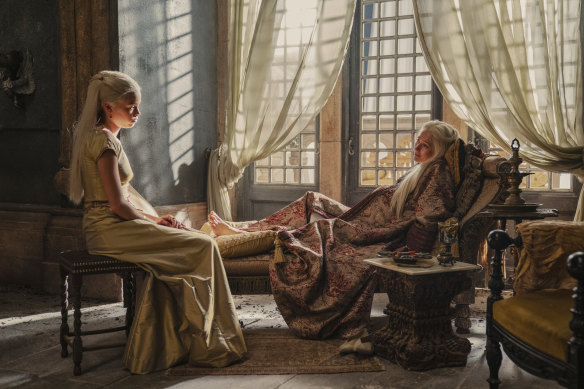 But simplicity is a shrewd pitch in a market saturated with scripted content. When television was a younger medium, and you had to buy a half-price ticket to a retro movie house on a Saturday night to see Dragonslayer, politico-fantasy soap like this would have been an impossible sell.

In a post-Game of Thrones world, you’re asking an almost-overwhelmed audience to make time between The Wheel of Time, Discovery of Witches, Firebite, The Witcher, Stranger Things, What We Do in the Shadows, The Outlander, The Mandalorian and, in a few more weeks, The Lord of the Rings: The Rings of Power.

Somebody pass me my diary.

House of the Dragon is streaming on Binge from August 21.