Hours before he was drafted by the Pittsburgh Steelers, running back Najee Harris stopped by the homeless shelter where he used to live in Richmond, California. There, the 23-year-old hosted a draft party and provided food for everyone in attendance.

“I wanted to make sure that I could give back to the community and show them if y’all still need anything — I’m never too big or too whatever to help you guys out, I’m always going to be the helping hand,” Harris said.

In 2010, Harris lived with his mother and four siblings in a tiny room at the Greater Richmond Interfaith Program shelter. Kathleen Sullivan, the organization’s executive director, told CBS San Francisco, “His mother was instrumental in getting him and all those children through what would normally be the most horrific experience of their lives.”

The Steelers selected Harris out of the University of Alabama with the 32nd overall pick. He’s expected to make an immediate impact on the team. He helped Alabama win two National Championships in 2017 and 2020 and took home last year’s Doak Walker Award, which is given to the college football’s best running back. He also leaves as the university’s all-time leader in total touchdowns with 57. 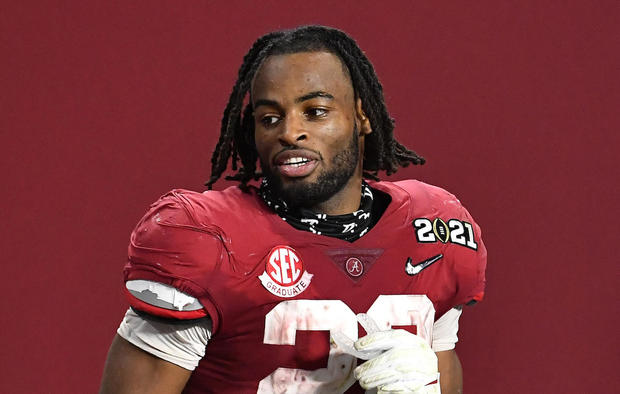 Harris is working on forming a nonprofit organization in Richmond and he hopes to continue giving back to the shelter in the years to come. “There was a time I needed a helping hand. They gave us an opportunity to get back on our feet. So it is my job to give back,” Harris told reporters.