The industry is now struggling to find enough workers, according to a report by hospitality consulting company AHS Advisory, which found the industry would take four years to fully recover. 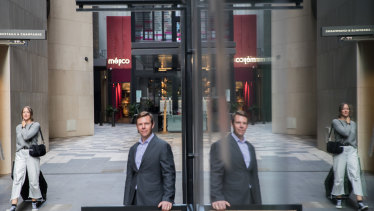 Next Hotel Melbourne general manager David Ness. His hotel was due to open Grand Final weekend last year; it finally opened its doors in March.Credit:Jason South

The Accommodation Association, which hired AHS to help pen its submission to the Victorian parliament’s inquiry into the pandemic’s impact on tourism, wants the Morrison government to ease international student visa rules so they can work longer than the current 20 hours per week allowed.

The AHS analysis finds that, in the year leading up to February 2021, there were 6.6 million fewer nights spent in Victorian hotel rooms than were spent over the same year before February 2020.

It meant hotel operators lost an estimated $1.44 billion in revenue – a drop of 62 per cent.

“These losses are staggering,” state opposition tourism spokeswoman Cindy McLeish said. “The accommodation sector has been decimated in Victoria.”

Regional Victoria – which has seen a strong resurgence in visitors since coronavirus numbers in the state subsided – also lost revenue, estimated in the report to be around $285 million.

Next Hotel Melbourne in Little Collins Street opened on March 1 this year. After five years of preparations, it had been due to open on the grand final weekend last year.

“We were in lockdown instead,” said David Ness, the hotel’s general manager, who joined the business a year ago as construction of the hotel neared completion. It was finished in August but Melburnians weren’t allowed out of lockdown until October, after 112 days of restrictions.

“We forecast that business would be back by March,” said Mr Ness, who is now having trouble hiring staff, with most of Melbourne’s hotels reopening – and all of them competing for workers.“We rely on international students to cover the peak demand periods. That market has totally dried up.”

Employment numbers in the hotel industry plummeted from around 20,000 workers before the state-of-emergency was declared last March to just 6000 at the height of the lockdowns – almost all of them on JobKeeper.

Next Hotel Melbourne has around 60 staff, with the largest number of workers cleaners. It hires its own cleaners – most big hotels employ cleaning staff via labour-hire companies. “We don’t outsource it because it’s so critical to the hotel experience,” said Mr Ness, but this had made it difficult at times to find staff.

The 255-room hotel now has plenty of tourists on weekend stays but the corporate dollar is proving more elusive so far, with staff having gotten used to Zoom meetings during the pandemic. “Corporate travellers are slowly returning and this segment has been historically a large portion of the business,” said Mr Ness, a 30-year veteran of the accommodation industry.

AHS Advisory managing director Ron de Wit said Victorian tourism had felt the full impact of the pandemic, with Melbourne bearing the brunt of it. “[And] it will take at least four years to build revenues per available room back to 2019 levels.”

The association has asked the state government to roll out a second round of its $200 travel voucher scheme for metropolitan Melbourne – its first had 40,000 people take up the offer.

The association also wants the Victorian government to introduce tougher health laws for Airbnb and other short-stay operators, and to again provide hotel operators with rebates for CBD hotels where each room can attract taxes and levies of between $1670 and $2800.

And foreign workers needed to be able to work longer hours than the current 20 per week allowed under most international student visas. “Seventy-eight per cent of hotels across Australia are experiencing a skilled-labour shortage, [so it’s] a significant barrier to recovery,” he said.

Tourism Minister Martin Pakula said the pandemic had a profound impact on the accommodation sector. “We’re providing a wide range of support to help businesses and support jobs, through direct grants, travel vouchers, major events, and marketing campaigns,” he said.

“How long the recovery takes will depend on an enormous number of variables, particularly the speed and breadth of the global and domestic vaccine rollout, and how effectively it suppresses the spread of COVID variants. None of that is clear right now. In the meantime, we will continue to back this crucial sector of our economy.”

Get our Coronavirus Update newsletter

Stay across the news you need to know related to the pandemic. Sent Monday and Thursday. Sign up here.