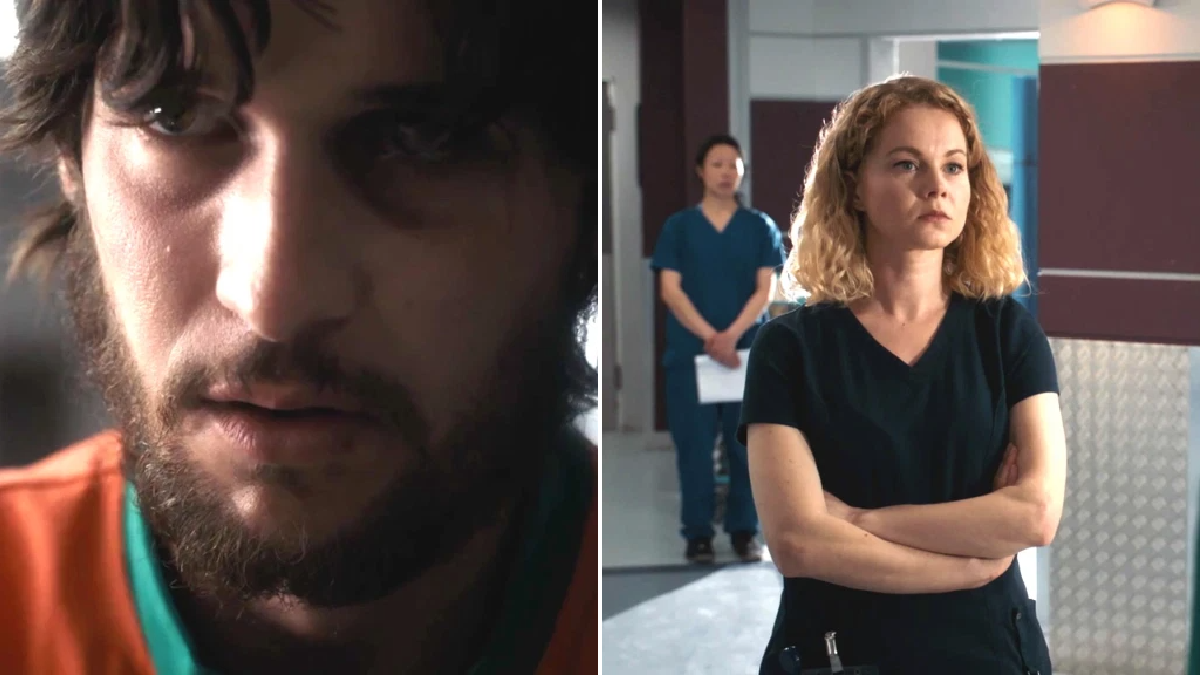 He’s back! Cameron Dunn (Nic Jackman), one of Holby City’s most outrageous villains, returned to the scene of his crimes tonight, but this time he arrived in a prison van, handcuffed, physically weak and apparently a broken man.

Chloe (Amy Lennox) was naturally upset that the man who’d been obsessed with her, killed several people and held her mum prisoner for weeks was back on Holby’s wards and she wanted to back out of the stent trial. Eli (Davood Ghadami) reminded her that she was a doctor first and foremost and Cameron was the perfect candidate for the trial.

Chloe was right to be wary, though, and it wasn’t long before we saw that his weakness was just an act. He grabbed her wrist as she examined him and told her, ‘My brain is the key that sets me free.’

Shortly after that we saw a mysterious nurse we’ve never seen before bringing Cameron an injection and then his heart apparently stopped. This was all part of a cunningly conceived escape plan and was the reason Cameron had specified that he didn’t want to be resuscitated if the situation arose. Under cover of a report of a (fake) multiple casualty accident coming in, Cameron’s ‘body’ was swiftly sent to the morgue. By the time Chloe realised that the ‘My brain is the key…’ quote was by Harry Houdini, the famous escapologist, and rushed to the morgue, Cameron had been revived by his accomplices and fled.

So now Cameron is at large and nursing a grudge against more than one member of the Holby staff team. But was the bit about him being a good candidate for the stent trial true? Because if so it means that he’s not the healthiest of escapees. Either way, we’re bound to see him back at Holby before too long.

Some commenters on social media have said that Evie Fletcher (Phoebe French) is as much to blame as Jeni (Debra Stephenson) for the trouble that poor Mia (Brianna Shan) now finds herself in. This really isn’t the case, because for all that Evie is a little bit older than Mia she’s still a very young, very inexperienced person and Jeni is a seasoned manipulator who knows exactly how to play her.

As soon as Evie went to her with concerns about the situation Mia was getting into, Jeni turned it straight back on her with, ‘Why did you get her involved? Either Mia is an innocent little girl who you abandoned – or she wanted it.’ Later we saw Evie talking to Mia and using the kind of words that Jeni had used when grooming her, telling her to act like a grown up and that she went into the bedroom with three men willingly.

Things could take an even nastier turn as Mia admitted that she hadn’t always remembered to take the pill. Although Mia seemed about to confide in Donna (Jaye Jacobs) until Evie interrupted them, it looks as though the best hope for taking Jeni Sinclaire down is Lucky Simpson (Vineeta Rishi), who has acquired one of Jeni’s bank statements that could prove that she’s been taking money that was raised by charitable events for the hospital. Hopefully once that starts to come out, the rest of Jeni’s sleazy empire will tumble after it – but Jeni is not going to go down without a fight.

Carole (Julia Deakin)’s dementia is worsening, and she thought she was back at the seaside in Sheppey. Jeong-Soo (Chan Woo Lim), who seems to have nothing else to do other than look after Carole’s well-being – but hurrah for that – got some deckchairs and helped Carole to enjoy a fantasy trip to the seaside in the Holby garden.

For long-time Holby viewers this was a lovely hark back to the episode when Dominic (David Ames) and Digby went to the seaside to stay in Dominic’s parents’ caravan. Jeong-Soo is even starting to occupy the sort of role in Dominic’s life that Digby did – he was even happy to go along with Carole’s assumption that he was Dominic’s partner, putting his hand affectionately on Dominic’s knee. ‘Move that or I’ll break it,’ Dominic muttered, because he is the boss after all.

Carole’s illusion was ruined by the sound of an ambulance siren, but not before she’d had some moments of real happiness. ‘I love you, Dazzle,’ she told her son.

And Sacha (Bob Barrett) went on a date with someone he’d met online – who turned out to be Max McGerry (Jo Martin). Surprisingly, considering her taste in men has previously been Selfie, they got on really well. Could this be the start of a romance, or just a lovely friendship?

Sue Haasler is the author of five novels and the official BBC Holby City book, which you can read about here.