There’s a lot going on in Avengers: Infinity War — our favorite superheroes suit up, fight (to the death in some cases), and some even appear from dark corners with impressive new beards (hi, Steve Rogers, how you doin’?). Facial hair aside, the rest of the plot revolves around the purple big bad of the new movie, Thanos, and the Infinity Stones. Not sure what those are or need a refresher? We can help.

What Are the Stones?

The Infinity Stones, known as Infinity Gems in the comics, are six cosmic powerhouses, each with a specific power. In the Marvel Cinematic Universe, we’ve already come across five of the six: the Tesseract/Space Stone, the Mind Stone, the Aether/Reality Stone, the Orb/Power Stone, and the Eye of Agamotto/Time Stone. The only stone as yet unseen is the Soul Stone, which many assumed would pop up in February’s Black Panther. Twitter user mantia helpfully put together a graphic of the known stones and their locations (though there have been a few updates since Thor: Ragnarok).

As of now, they’re scattered across the universe. On Earth, Vision and Doctor Strange each possess a stone. The yellow Mind Stone is first seen in the Chitauri scepter in The Avengers and now resides in Vision’s forehead. Its powers, when harnessed, include firing energy beams, controlling people’s minds, and endowing others like Scarlet Witch with powers of their own. The green Time Stone, aka the Eye of Agamotto, is worn on a necklace by Doctor Strange, and it allows him to reverse and loop time itself. The remaining three reside in space:

As for the last stone, its location is still unknown. The orange Soul Stone has not appeared in the films yet, though our money was on seeing it in Black Panther. In the comics, the stone’s powers include controlling and manipulating souls and granting access to another universe. Judging by the awesome trailer for Black Panther, we assumed King T’Challa would have access to that other universe, Djalia, where all of Wakandan history and memory are preserved outside of time and space itself. Black Panther (minor spoiler alert) doesn’t confirm our theory, but we get to find out where it’s been hiding all this time — as well as who’s guarding it — in Infinity War. 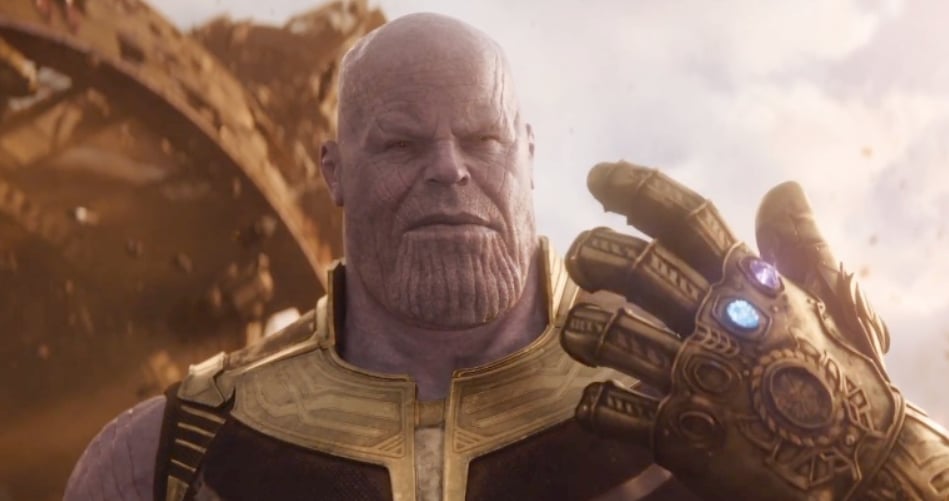 Why Do the Stones Matter in Avengers: Infinity War?

Thanos, the team-up film’s villain, is on a mission to collect all six of the stones and has been since the first Avengers movie when he loans the Mind Stone out to Loki so he can acquire the Tesseract for him. Considering that none of his plans have so far worked out, Thanos is now on his way to Earth for the ones he knows about.

Why is it such a big deal, though? Well, that falls to the golden glove we see Thanos wearing: the Infinity Gauntlet. Much like the Chitauri staff from the first Avengers movie, the Gauntlet allows the wearer to wield the godlike powers of all six stones safely — if you watched Guardians of the Galaxy, you see that it takes four of them to use the Orb without burning up and dying. And because Thanos is a bad guy (duh), he wants to wipe out half of the universe . . . and he’s about to do it. In the trailer, we saw he had at least two stones (the purple Orb and blue Tesseract, offered up by Loki) and he was already taking down Tony Stark’s Iron Man with just one blow. With only two of the stones! Imagine all six and their respective powers together.

Avengers: Infinity War, which is in theaters now, mainly revolves around the Avengers trying (and failing) to protect the stones. After all, the as-yet-unnamed Avengers 4 needs a finale-worthy ending, and fighting against a dude who has all the power in the universe(s) is a pretty good one. You’ll just have to see who survives the first part of the war to fight that one.