To become a mother, a woman sacrifices something: her autonomy, her job, her body, or some combination thereof. She usually does so for a child she’s willingly chosen to bear. But in Gilead, women must sacrifice everything to have a child they may not have wanted and cannot keep. The first season of The Handmaid’s Tale looked at what it took to get pregnant in Gilead, but this time around, it’s about what it’s like when women actually do.

The Handmaid’s Tale Season 2 addresses motherhood through the eyes of June (Elisabeth Moss), who’s carrying a child for Commander Waterford (Joseph Fiennes) and his wife Serena Joy (Yvonne Strahovski). Not by choice, of course; it’s something she must do. And while it’s sold as an honor, being that few women can carry to term in this dystopian future, it’s work. There’s nothing beautiful or meaningful or special about giving birth in this authoritarian, theocratic regime — it’s joyless and mechanical. It’s nothing like what June experienced in her first pregnancy with Hannah, a real blessing that wasn’t by His hand or under His eye. This difference forces June to contemplate what it means to be a mother when you haven’t actually chosen to be one.

In this world where women don’t have control over their bodies or themselves, June is but a vessel. This is her duty, as the show makes clear with help from Kate Bush’s “This Woman’s Work,” which plays during the harrowing opening scene of the premiere that shows just how far Gilead will go to keep its handmaids in line. Bush’s song, originally written for the 1988 film She’s Having A Baby, is about confronting an unexpected crisis during childbirth, and it’s certainly safe to say having all your rights stripped from you qualifies.

Season 2 shows that forcing women to procreate isn’t saving the world, it’s tearing it apart by diminishing what it really means to be a family. There is no right way to be a mother, but it always takes compassion and care, which there is absolutely none of in this place where women are forced to give their bodies to the patriarchy, no questions asked.

Having a working womb is currency in this world, but it only gets you so much. As Aunt Lydia tells June — whom she calls Offred, since it doesn’t matter to her one bit who any of these women used to be, but only whom they belong to, in this case, to "Fred" — she’s “standing in defiance, but risking nothing” while pregnant. June’s boldness only hurts the other handmaids, who are collateral damage in this war on women that Aunt Lydia paints as being for their own good. “There is more than one kind of freedom,” she tells them. “Freedom to and freedom from.” Gilead offers women freedom from having to choose. It’s one of “God’s gifts,” apparently.

When women dismiss this gift, though, their punishment is barbaric. Emily’s (Alexis Bledel) punishment was a clitorectomy that took away her pleasure but not her ability to have children. The government doesn’t mess with uteruses, because that would only punish the commanders and their wives — not to mention humanity. You would think that would give the handmaids some kind of upper hand, but it doesn’t. Not when men hold all the power and make all the rules; No. 1 being that there’s no greater sin than harming a child.

As for their mothers, though, they’re fair game to harm. That’s made even clearer this season, when handmaids are having their tongues cut out and hands burnt over open flames. There are always consequences, the worst being sent to the Colonies, the toxic waste dump where unwomen are sent to work until they die.

Being pregnant doesn’t fully protect you from the brutality of this world, either. Shortly after learning June is with child, Aunt Lydia shows her what happens to expectant handmaids who are “difficult” — they’re chained to their bed and given solitary confinement to scare the life out of them while they continue to grow another one inside them. “Nine months can feel like quite a long time,” Aunt Lydia threatens, but it’s only a threat if June fears the punishment. 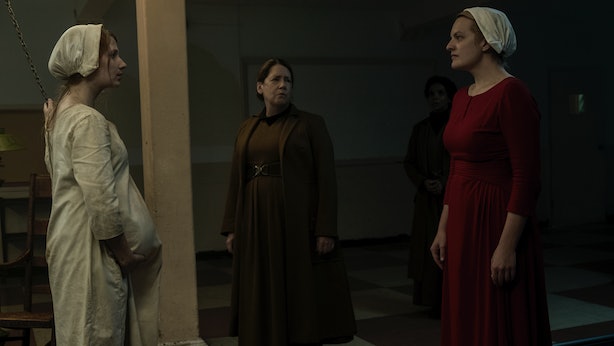 In Season 2, The Handmaid’s Tale expands upon Margaret Atwood’s 1985 novel to show how Gilead’s rule has turned women into livestock. They’re here to work and breed, until the slaughter comes for them. It’s not a question of “if,” but when that will happen, since all women are disposable. Especially those who don’t fall in line. Aunt Lydia scolds June for her “theatrics” — her refusal to stone Janine in the first season’s finale — calling it “a waste of energy, for what?” “Janine wasn’t nothing,” June says, but it’s clear by Aunt Lydia’s reaction she was. They all are.

But the fact that these women know they’re nothing to the republic means they have nothing to lose. This is the power June has, a willingness to risk it all, and she’s figuring out how to wield it. What complicates things is her wrestling with what role this baby plays in her life. What does she owe this child that she’s been forced to have? It’s got her thinking about her own fiercely feminist mom, whom we meet this season, and the choices mothers make for the sake of their kids often at the behest of themselves.