Warning: Spoilers for “The Handmaid’s Tale” below!

This week, we got some insight into what young adulthood looks like in Gilead. Teen girls are raised to be baby-makers and wives, and then married off to randomly selected men before they reach 18. Nick (Max Minghella) becomes one of those aforementioned men, forced to marry 15-year-old Eden (Sydney Sweeney) in the World’s Most Fucked-Up Wedding ceremony.

It’s a nauseating episode, one that we found difficult to even talk about. But it also brings a bit of hope in its closing moments: After a failed suicide attempt, June (Elisabeth Moss) finds her inner voice once more.

Meanwhile, in the colonies, Emily (Alexis Bledel) and Janine (Madeline Brewer) approach their hellish existence in opposite ways ― Emily through practicalities and hard truths, Janine through unbridled, perhaps unearned, optimism.

Emma Gray: Welp! In the course of a week, we went from The World’s Most Fucked-Up Baby Shower to The World’s Most Fucked-Up Wedding. By the end of this season, “The Handmaid’s Tale” just might make me feel repulsed by every one of our culture’s life event celebrations. This episode, we learned what it means to be a young woman who grows up in Gilead — and it’s horrifying.

June has been fully subsumed into Offred, and Nick is marrying a 15-year-old zealot named Eden (played by the fantastic Sydney Sweeney who I’d seen in Netflix’s “Everything Sucks!”). Praise be!

Laura Bassett: I was wondering what human rights violation they were going to introduce us to next, and they went with child marriage. Should have seen that one coming.

This episode further explores Offred’s relationship with Serena, and now that June has fully vacated the premises of her own body, we see that Serena is actually a bit frustrated and confused by her sudden complacency. Forcing Offred to watch Nick marry a child seems to be Serena and the Commander’s way of trying to squeeze blood out of a stone — just to get any kind of emotional reaction out of Offred, who has become so complacent as an incubator that she’s almost robotic. I think Serena is also a bit jealous of the passion she has sensed between Offred and Nick, as well as the fact that she knows the baby belongs to Nick, so she is punishing them for having two things that she is so desperately lacking with the Commander. 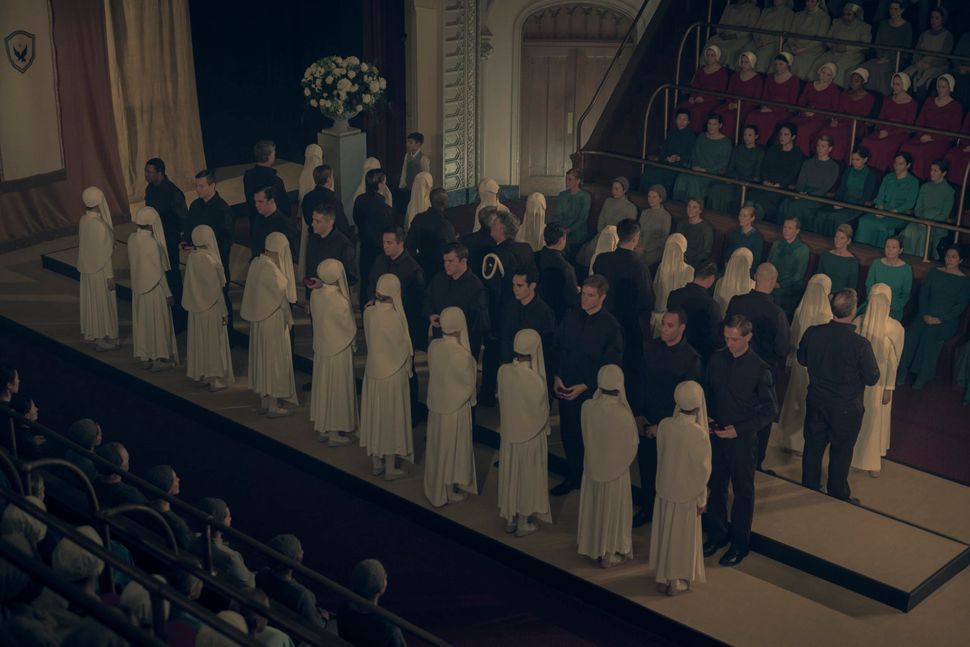 Emma: Agreed! Serena seems torn about what she’d like the terms of her relationship with Offred to be, which is why we see her constantly renegotiating them, episode to episode. To an extent, I think she enjoys that June is her intellectual equal. After all, Serena’s career pre-Gilead was based around lecturing and writing and intellectual sparring. June is a worthy adversary. Robotic Offred is not.

You also raise an interesting point about Nick, and the way both Serena and Commander Waterford seemed to be passive-aggressively punishing him. Though I couldn’t quite put my finger on what was driving the Commander’s actions — did he simply sense Nick’s affection for Offred and get jealous? At one point, we see Serena try to use that information to get a rise out of him. She’s so desperate for him to engage with her, in any capacity, that she tries to goad him into saying more than an “mmm hmm” to her. Spoiler alert: She fails.

I also want to go back to the child marriage theme for a second and point out that this is yet another human rights violation “The Handmaid’s Tale” depicts that we can’t remove ourselves from. As of February, in half of U.S. states, there was no minimum age for marriage when parents give consent and a judge declares an exception. In 2018, this is still an issue that people have to lobby very, very, very hard around — and often fail to get traction. CHILD. MARRIAGE. It’s insane. *Steps off of soapbox*

Laura: Yes — I would like to add that this episode makes it clear what’s involved in a child marriage: child rape. Serena has a very disturbing conversation with Nick’s 15-year-old bride in which we learn the girl has never had sex before and has no idea what to expect. While there may not be a rape scene quite as blatant and disturbing as Serena holding down Offred’s arms, this show reiterates that women in Gilead have no agency over their bodies and merely exist for men’s use and for reproduction.

That being said, I found it interesting that Serena tries to explain to Eden that she should be getting some kind of pleasure out of sex with Nick and that that’s morally OK. Later in the episode, we’re reminded that Emily was punished with genital mutilation for having any sexuality of her own, so I was not expecting Serena to be giving Eden any kind of sex-positive talk. This is also the first glimpse we get into how Serena might be as a mother. I’m not giving her too many points here — she’s still facilitating child rape and keeping a sex slave in her house — but what is her motivation in her dealings with Eden? 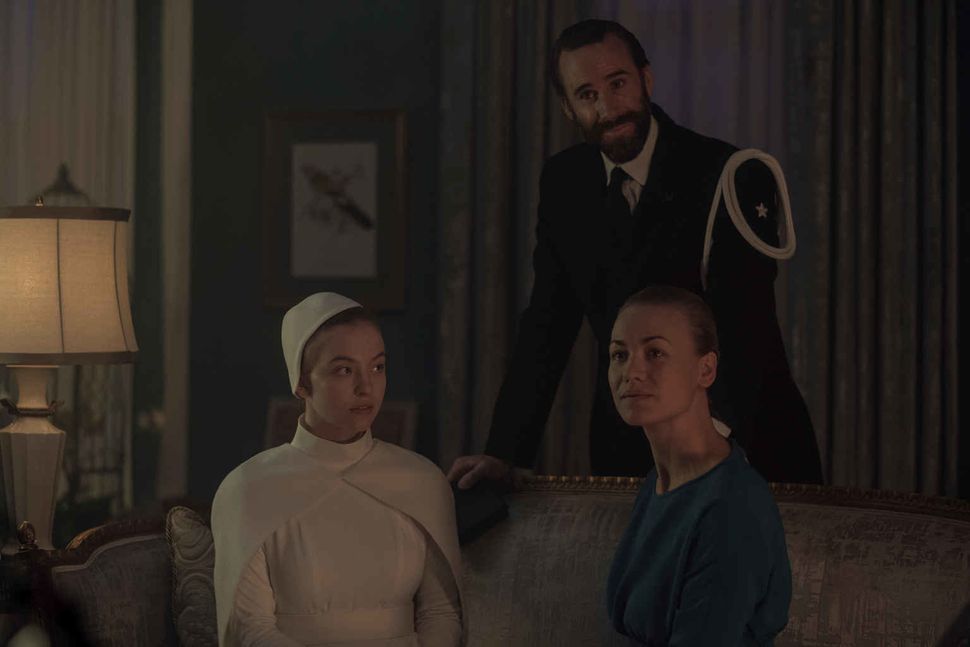 Emma: We know that Serena is a complicated person — that’s why she’s appealing to watch — and we saw that complication come out again here. From what we know, Serena is a true believer in Gilead’s philosophy, but only to an extent. Her zealotry was always motivated by a sincere concern about the nation’s birth rates (and likely her own burning desire to be a mother), and she clearly saw traditional gender roles and structures as a way to address both of those things. But we also know that she loves her husband, valued their pre-Gilead partnership and genuinely enjoys sex. I think she squares those things internally by telling herself that they’re only acceptable within the context of a (first) marriage between a man and a woman.

Should we talk about the colonies and The Less Fucked-Up Wedding now?

Laura: It’s amazing that the “less fucked-up wedding” is the one in which two slaves whose skin is literally rotting off from deplorable conditions and contaminated water at a work camp get married on their deathbeds, but yes, that was a very sweet moment. I think the vastly different reactions we get from Emily and Janine to that wedding map out along the divides of the resistance — those broken-down women who accept Gilead’s values and even internalize them vs. those who still have some fight in them.

At the same time, that wedding was one of the rare moments in the show where we see two people genuinely free to love each other, regardless of politics or sexuality, in a ceremony that’s actually meaningful and genuine for them both. This serves as a perfect contrast to the more fucked-up wedding we see later in the episode, where Nick is forced to marry a girl whose face he’s never even seen. 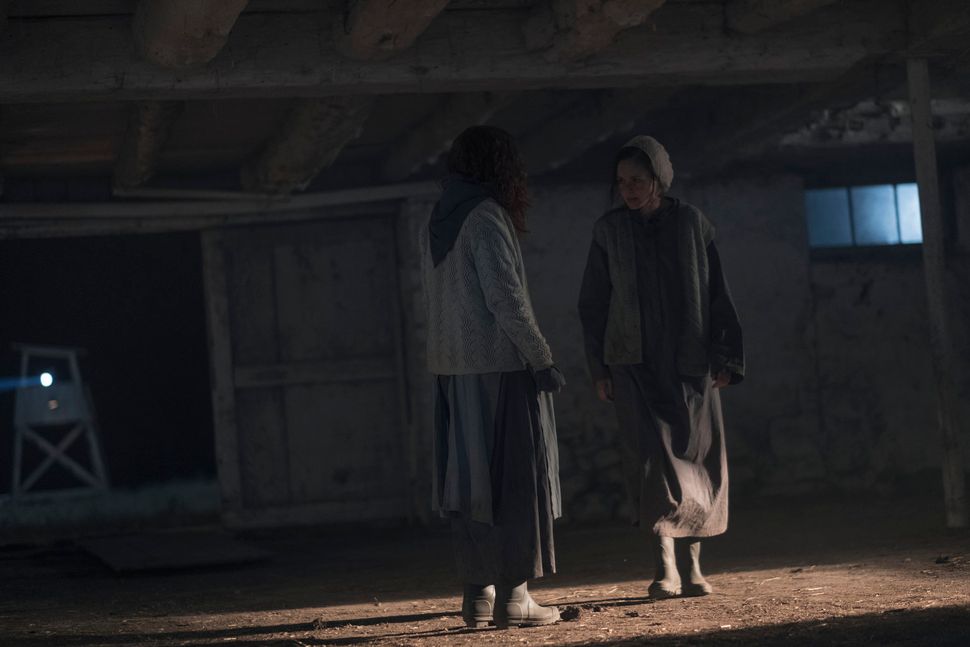 Emma: The Janine-Emily divide raised some really interesting questions. Is finding moments of joy within the darkness equivalent to “dressing up the slaughterhouse,” as Emily put it? And does doing so necessarily mean that you have no fight left? I’ve watched the episode twice and I’m still not sure where I fall.

I do think that Janine is more self-aware than she lets on. For her, a veil of optimism and the belief that God holds them all in his hands is a form of armor she puts on while living in hell. Emily, an academic rather than a spiritualist, has no ability to see any good in the colonies ― something that is both understandable and deeply relatable. But I also thought that Janine made a compelling point while they were arguing about the wedding between Fiona and the dying Kit that Janine had set up. “This place is hell. And covering it up in flowers doesn’t change anything,” says Emily, which is true. But then Janine shoots back: “So what? We come here, we work, we die. Kit’s going to die happy, so what’s the problem?” It’s hard to argue with that.

The reality is that — unless something changes very drastically, and that doesn’t seem close to happening — these women live in hell and will likely die in hell, buried next to hundreds of other women Gilead deemed unworthy. Is it so wrong to try to find moments of beauty and connection while in hell?

Laura: That’s also what’s interesting about Offred’s pregnancy. It was conceived in genuine love, and you can see her throughout the episode trying to disconnect from Nick and disconnect from the fetus inside her. She starts heavily bleeding, suggesting a miscarriage, and Offred barely reacts at all. It’s not until she wakes up in the hospital and realizes the heart is still beating that feels that connection of motherhood again. And even in the hell that is Gilead, she dips her head under the covers and whispers sweet and inspiring words to her future child with the same kind of blind hope that Janine has when she makes a wish on the dandelion weed.

The viewer obviously needs these bright spots throughout the show to break up some of the horror. This episode was rough! I thought my heart was going to stop a few times.

Speaking of which — I found it interesting that the wake-up call for June, the moment that shook her back into her body, was not being forced to watch Nick marry someone else — it was almost losing her baby, and then feeling that survival. It’s as if the resilience of her own fetus inspired her to keep fighting. 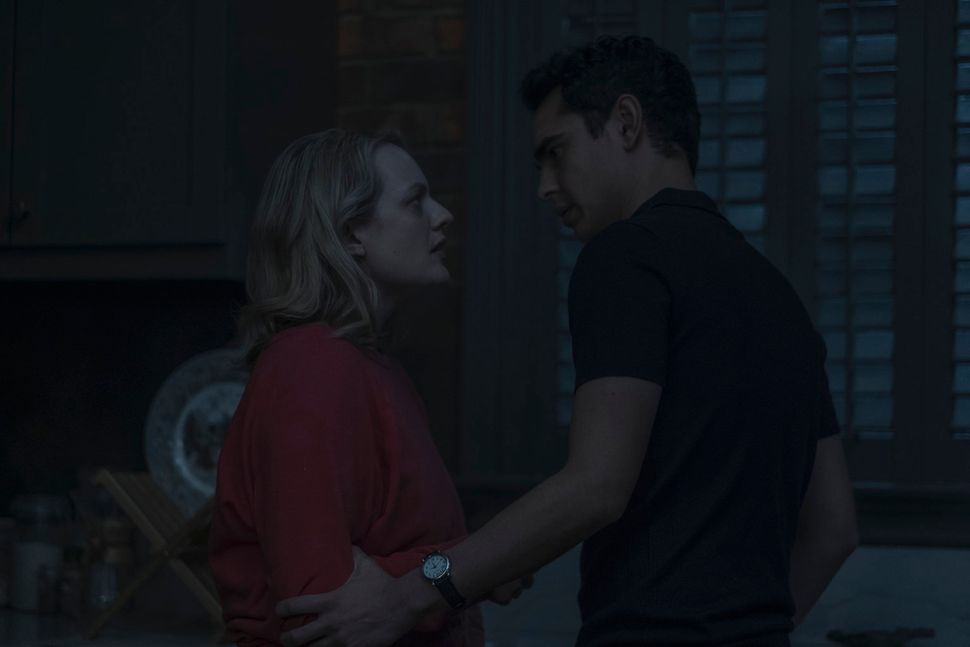 Emma: Seeing Nick married off to a child illustrated what a future for a child looks like in Gilead: indoctrination and despair. The ceremony seemed to push Offred to contemplate, and then attempt, suicide — something that we had never really seen her consider before. But it was her survival, and her baby’s, that made her find her voice and her resolve again.

“Now you listen to me, K?” she says to her fetus. “I will not let you grow up in this place. I won’t do it. Do you hear me? They do not own you. And they do not own what you will become. Do you hear me? I’m gonna get you out of here. I’m gonna get us out of here. I promise you. I promise.” She not only made a commitment to her future child, but she recommitted to herself, to June, to the life and the future that she deserves.

Laura: Next week we get to see how Serena reacts to the fact that June almost killed herself and the baby. She missed having a formidable opponent. I suspect she has one again now.

Episode 4: “The Handmaid’s Tale” Brings Us The “World’s Most F**ked Up Baby Shower”

Episode 3: “Handmaid’s Tale” Takes On The Everyday Horror Of Disappointing Your Mother