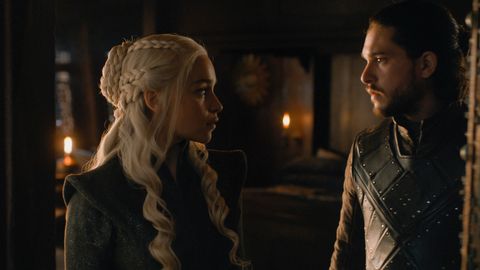 Some potentially very bad news, Game of Thrones fans. While the eighth and final season has long been rumored to premiere in April of next year, it now looks like we may have to wait a little longer.

In a new interview with HuffPost, visual effects supervisor Joe Bauer revealed that the show will next be eligible for Emmys in 2020, not 2019. “In two years we’ll be eligible for the Season 8 work,” he said, “which we’re just beginning now.” In order to be eligible the 2019 Emmys, the show would have to air most of its episodes between June 1, 2018, and May 31, 2019, and Bauer is saying that it’s not going to make that deadline.

“We’re going to be toiling away on Season 8 until May of 2019, so it’s eight or nine months away,” he continued. “But the prequel is starting to shoot in February, at least the pilot. So we’ll still have quite a lot to do on Season 8 when they’re beginning.”

HuffPost later updated their story with confirmation from an HBO rep that the show will definitely air in the first half of 2019, even with VFX going into May. Since the final season is just eight episodes long—with each episode clocking in at a feature-length 80 minutes or more—it could start airing in May and still be eligible for the 2019 Emmys, since the rule just requires that the bulk of the show airs before the end of May 2019.

On Sunday, HBO sneaked out the first new footage from GoT season eight, as part of a promo reel for their 2019 lineup that also included glimpses at Big Little Lies season two. You can check out all three seconds of new footage below: