More seasonal workers will soon arrive from overseas after national cabinet struck a new deal on travel and quarantine arrangements but the $40 billion international education sector has again been left out with leaders putting off a decision until the new year.

Prime Minister Scott Morrison has made it clear returning Australians stranded overseas remains the top priority for the federal government. 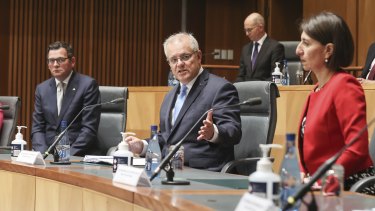 The states and territories will shortly send proposals to the Commonwealth for how they can safely bring seasonal workers to Australia.

Mr Morrison said Queensland's on-farm quarantine, in place since October, had been "very, very successful" and he wanted to see it replicated in other jurisdictions with a critical need for workers.

"No hotel quarantine system will be able to cope with that," he said after Friday's national cabinet meeting. "If we want to guarantee economic activity … that fruit is picked, stores are full and people can buy the products that they love at anything like an affordable price, then we have to find a way forward here."

National Farmers Federation chief executive Tony Mahar said farmers had been scrambling for labour but were resigned to the situation not being fixed until international travel resumed. Some were not planting their usual short-term crops – things like tomatoes, strawberries, leeks, onions or broccoli – out of fears they wouldn't be able to get people to pick them in the next two or three months.

He said moves towards on-farm quarantine were small improvements.

"If there's not enough workers to pick the crop, that means whether it's lemons or whether it's table grapes or whether it's vegetables, it won't be able to make it to market. We hope it doesn't get there, but that's the reality we're facing."

The Commonwealth has also asked states for plans on safely returning international students, but national cabinet didn't reach any consensus on when this could start.

Mr Morrison reiterated Australians returning had to have first priority for hotel quarantine places. Since mid-September, 45,954 people had come home but as of Friday there are another 38,655 registered as wanting to return.

But NSW and Victoria are still yet to submit formal proposals to the Morrison government, which federal education Minister Dan Tehan had requested by the end of November. Every other state and territory, with the exception of Tasmania, has submitted draft plans or correspondence.

Last month, Ms Berejiklian said she wanted to allocate a third of the state's hotel quarantine slots – about 1000 people a week – to international students, skilled migrants and specialist workers. However, the Commonwealth has been resistant to any moves that effectively lower hotel quarantine places for Australians.

The Victorian government is considering a plan from the international education sector for quarantine to be done in campus accommodation.

Ms Berejiklian said that wouldn't happen in her state. "I'm not happy to see the quarantine system move out of the hotels at this stage. I think that would be too high a risk."

International Education Association of Australia chief executive Phil Honeywood said the sector now had a limited window of opportunity to bring students back in time for 2021's first semester.

"If that window has now been closed, then Australia is giving up approximately $20 billion in revenue whilst doing long term damage to this crucial industry," he said.