When New Zealand comic Angella Dravid was 16 years old she ran away from her mother’s home in New Zealand and flew to London to live with the 46-year-old man who had groomed the teenager online. When she was 18 they were married; when Dravid was 19, a domestic violence incident between them ended with her arrest and imprisonment. When she was 22 and after several years in a halfway home she was deported back to New Zealand.

As a coming of age story it’s bewildering and painful, but as the basis for a memoir it’s also been hugely successful. Now 35 and wielding a distinct voice, Dravid has turned her formative crisis into successive works that resonate with audiences. In 2017 she debuted her award-winning stand-up show Down the Rabbit Hole and now after further self-examination there’s the autobiographical podcast Love, Rock Bottom & Other Triumphs. 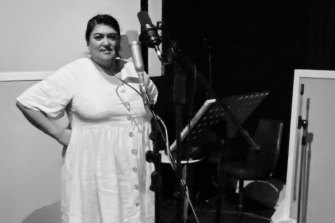 “I found hope in what people think is a bad place. I think this is an optimistic story, but also funny – my marriage really was worse than being in prison,” says the Auckland-based comedian. “When you’re 16, you don’t realise the consequences of what you’re doing, but being young and naive also gave me the optimism to get through it as well.”

An original production for Amazon’s Audible platform, Love, Rock Bottom & Other Triumphs is a podcast that like its creator refuses to adhere to expectations. Dravid’s narration is deceptively matter-of-fact, especially when discussing unsettling situations. She finds deadpan humour in her own failings, and looks at each stage from surprising perspectives. Running 15 to 20 minutes, the nine episodes are an audio page-turner: you need to know what happened next.

“I spent a lot of time processing this,” Dravid says. “The more honest I was, the more people would try to understand me, instead of me just trying to justify everything to them.”

The daughter of an Indian father and a Samoan mother who spent part of her childhood in South Australia, Dravid never expected her calamitous years in Britain to define her life back in New Zealand. When she first tried stand-up Dravid was just looking to loosen herself up so she wasn’t so intimidating at her office job, but as her profile grew she realised she had to own her past before it became someone else’s revelation.

Down the Rabbit Hole won Dravid New Zealand’s prestigious Billy T Award for the most promising Kiwi comedian in 2017, and the adaptation rights were purchased by Piki Films, a production company co-founded by the New Zealand filmmaker Taika Waititi (Thor: Ragnarok, Jojo Rabbit). Love, Rock Bottom & Other Triumphs is the first descendant of that acquisition, transforming an hour of stand-up into a podcast that runs for two-and-a-half hours.

“I was well-versed in what I was willing to reveal for the stand-up show, but for the podcast I had to unravel more details I wasn’t always comfortable with,” Dravid says. “In a couple of episodes I had to talk about my husband and I had just blocked that entire part of my life. Having to describe a person I’d tried to blank out was quite hard.”

Dravid and her co-writer, Josephine Stewart-Te Whiu, sifted through the entire story, looking at what they needed to include to craft a narrative strong enough to maintain an audience’s interest and plausibility. Some elements of the show did translate. Live, Dravid has finished her performance with a Q&A session, complete with a slideshow of verifying images, to reassure audiences that her punchlines were built on real events. For the podcast the ninth and final episode plays a similar role, as Stewart-Te Whiu and Dravid discuss what happened.

“We tried to include more of the backstory than the stand-up show had,” says Dravid, who dedicated an entire episode to her upbringing and the fraught relationship with the mother she fled. “It was challenging because there were more stories I wanted to tell. We had to go through and pick and choose. Josephine challenged me to go deeper. If I wanted to talk about pain I could. The podcast is gut-wrenching in a way the stand-up show never was.”

Dravid, who’s also a regular presence on New Zealand television, whether doing chaotic celebrity interviews or winning the celebrity edition of the game show Taskmaster, also had to reconfigure her performance style. Just as her current self is a long way from how she was as a naive teenager, an empty recording studio bears little similarity to a full stand-up room.

“With stand-up you’re relying on feedback. You’re relying on the audience laughing. When you don’t have that you have to anticipate what they’ll be thinking,” Dravid says. “But it does come out more traumatic that I intended because you can’t read my expressions. To make up for that the podcast version of my voice is me at my most upbeat. There’s more strength in owning your own shame and learning from it than in feeling like a victim.”

THE WATCHLIST
Find out the next TV, streaming series and movies to add to your must-sees. Get The Watchlist delivered every Thursday.