“What time is it, and how do we get out of here?” asked comedian Amy Poehler while she presented an award towards the end of the Emmys five-hour broadcast. The 20-time Emmy nominee was joking – yet it proved the most poignant question of the night.

Maybe only because the pandemic has robbed us of so many award shows, did the ceremony on Monday feel so long. Recently, award shows have been glorified Zoom calls: famous people reduced to blurry pixels forced to accept their awards at home.

But the 73rd Primetime Emmy Awards marked a return to a more traditional ceremony, including an actual red carpet, real-life attendees and a really long run time. Should you not feel the need to rewatch the broadcast in its entirety, here are five key takeaways from Hollywood’s first in-person awards show in two years.

What diversity problem? Everything’s all white

No matter how hard the industry tries to spin it, there are no shades of grey on this issue: the winners in all 12 major acting categories presented during the Emmys were white.

While the Emmys were hosted by Cedric The Entertainer, a person of colour, and there were a record 49 non-Anglo nominees recognised in the acting and reality competition categories, white actors swept the most high-profile categories.

Diversity remains a key talking point in Hollywood, with industry bodies forced to reckon with racial bias, so it was noticeable that not a single black, Asian or Latino person won an acting award.

There was some love for diverse talent with RuPaul Charles and his RuPaul’s Drag Race team picking up the award for outstanding competition program. Meanwhile, Michaela Coel took home the Emmy for outstanding writing for a limited series for HBO’s I May Destroy You.

As the first high-profile awards show of the post-vaccination era, all eyes were on the Emmys to see how they would handle the subject of COVID-19 and in true Hollywood style they largely swept it under the rug.

The red carpet was on the whole a maskless affair (nothing ruins an outfit like a heavy-duty N95 mask). By the time guests crowded into the ballroom for the ceremony, COVID-19 felt the contagious elephant in the room. Comedian Seth Rogen took it upon himself to articulate the awkwardness. 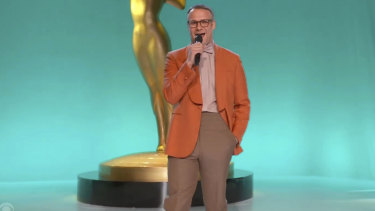 “Let me start by saying, there’s way too many of us in this little room,” said Rogen when announcing the first award of the night. “What are we doing? They said this was outdoors. It’s not.”

The event was held indoors at The Event Deck at LA Live in California. While host Cedric the Entertainer assured viewers that all attendees were fully vaccinated, COVID seemed an awkward afterthought. Slightly strange, considering the US is experiencing a surge in cases with more than 160,00 new infections a day.

TV Belongs to The Crown and Ted Lasso

“If you want an Emmy, get yourself booked on Ted Lasso or The Crown,” said Dr Phil during one of the Emmys’ many (deeply unfunny) sketches. While Dr Phil’s advice usually is dubious at best, he’s absolutely spot on here.

It felt like we ping-ponged between awards for Ted Lasso and The Crown for much of the ceremony. Jason Sudeikis was recognised for his role as the titular Ted taking out best lead actor in a comedy series. The Apple TV+ series also won best comedy, while Brett Goldstein and Hannah Waddingham grabbed best supporting actor and actress in a comedy series.

Considering how few wins AFC Richmond notch up, it was nice to see the show rewarded.

Everything is better in London, even the Emmys. Due to filming commitments and COVID-protocols, the cast and producers of The Crown held their own ceremony in London, and it looked far more fun than the actual Emmys in Los Angeles.

You had Olivia Colman appearing bleary-eyed and emotional as she accepted her award (to be fair, the time difference meant it was the wee hours in Ol’ Blighty). 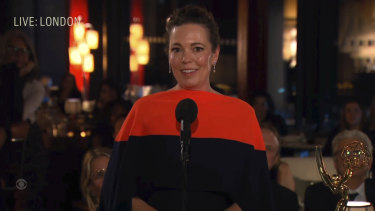 There was Emma Corrin, fresh from her star turn as Princess Diana, seemingly preparing for an upcoming role as a synchronised swimmer. 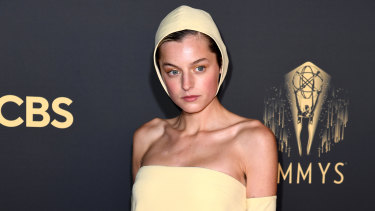 And, of course, Gillian Anderson. The 53-year-old seemed to be having the time of her life on the way to winning her first Emmy since 1997.

Look, we all understand that hosting the Emmys (or the Globes, or the Oscars) is the kind of poisoned chalice you wouldn’t wish upon your worst enemy. But still, when your name is Cedric the Entertainer, and you fail to be entertaining, well, the criticism writes itself. No doubt an important lesson in managing expectations for Cedric.

Cedric the Entertainer started the show well with his TV-inspired remix of Biz Markie’s Just a Friend, but it was all downhill from there. His joke that WandaVision was really about Wanda Sykes playing an optometrist was met with career-ending silence. Maybe next year they should try someone who is universally loved: Jason the Sudeikis.

Across the board, laughs proved hard to come by, with all the filler sketches failing to land. While the dreaded wrap-up music consistently cut off winners, producers somehow managed to find time for a two-minute sketch involving Cedric the Entertainer talking to The Fly, who landed on Mike Pence’s head back in 2020. Topical.

There was one saving grace, and it was Jennifer Coolidge. The White Lotus star presented the Emmy for outstanding lead actor in a comedy series, stealing the show with her trademark sarcasm.

“I want you all to know, nominees, that you’ve overcome the incredible handicap in this business of being men,” Coolidge remarked. “Bravo, gentlemen, wherever you are.” 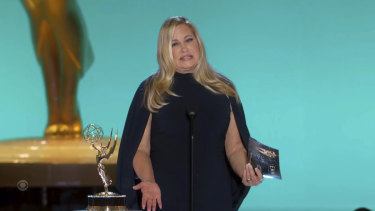 Jennifer Coolidge presents the award for outstanding lead actor in a comedy series during the Emmy Awards.Credit:Television Academy via AP

On the whole, the Emmys lacked laughs, and while Cedric attempted to entertain, ultimately, all Jennifer had to do was play it Coolidge.