The firefighters’ union has threatened to campaign against the Labor Party in 15 marginal state seats, in what could be a bitter fight as the anti-corruption commission finalises its two-year investigation into dealings between the union and the Andrews government.

United Firefighters Union secretary Peter Marshall on Monday vowed to wage a prolonged battle before the November election if the government goes ahead with plans to change compensation legislation for firefighters who develop certain types of cancer. 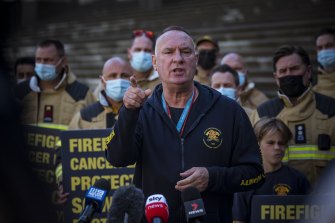 Peter Marshall addresses the media on Monday. He has vowed to campaign against the Labor Party if presumptive rights legislation expands to other workers. Credit:Chris Hopkins

The government is planning to extend the firefighters’ presumptive workplace compensation scheme to include Country Fire Authority and Fire Rescue Victoria vehicle and equipment maintenance employees.

The legislation – which provides money to employees who develop cancers proven to be caused through firefighting – is likely to pass the upper house this week, with the opposition indicating it does not oppose the changes.

The scheme covers about 5000 paid firefighters. If expanded, another 90 vehicle and equipment maintenance employees would be eligible for presumptive compensation.

Leon Wiegard, from the Australian Services Union, which represents the maintenance employees, supported the bill, saying his members also attended fires and were often exposed to toxic chemicals.

But Mr Marshall claimed changes to the legislation would “compromise the viability of the scheme, both financially and legally”.

He accused Emergency Services Minister Jaclyn Symes of reneging on a deal she made in December that the government would not proceed, and said there was no scientific basis for the scheme to be expanded.

“Firefighters’ presumptive rights was not introduced as a trinket for firefighters, and nor should it be used as an election promise to other classifications that the scheme is not designed for,” Mr Marshall wrote in a letter to Ms Symes.

Ms Symes said she did not commit to dump the bill, and there was no threat to the scheme.

“This is a very small number of people – a cohort of 90, on modelling we suspect probably only two people will even make an application per year – that is hardly a threat to the viability of the scheme,” she said.

The Age last month reported IBAC was close to finalising its investigation, and a “special report” would probably be published this year just as the government seeks re-election. Mr Marshall refused to comment on the investigation.

While some Labor sources scoffed at the premise of the union campaign, others are worried about Mr Marshall’s formidable campaigning skills and his ability to distil the issue into a message that centres on the government weakening the laws for firefighters – an angle he laboured during his rare media appearance on Monday.

One Labor source, speaking on condition of anonymity, questioned how the union secretary planned to sell the message that the government should not expand a critical scheme to other workers.

“He would be the first union secretary to go to the electorate complaining about a Labor government expanding rights for workers,” the source said. “Clearly, he wagged the classes when they were teaching campaigning.”

The union fought for the Labor Party at the 2014 election, with firefighters photographed on how-to-vote cards handed out at polling booths and turning out to door-knock and phone voters.

Mr Marshall said in an email to Victorian ALP state secretary Chris Ford that his members had already sent more than 5000 emails to Labor MPs condemning the government’s plans. The union had also begun a major advertising blitz, as well as distributing 500,000 leaflets in marginal Labor and key strategic seats.

“You have a Premier who says he’s going to take away the protection [for firefighters],” he said.

“He can spin it all he wants to say it’s only a small number of people and they work as a team. That is absolute rubbish. Do the right thing and do not desecrate the laws that protect these people and their families.”