A federal inmate scheduled to be executed next month has tested positive for coronavirus, according to his legal team. The attorneys for Dustin John Higgs said they were notified of the positive test on Thursday.

Higgs is convicted of ordering the 1996 murders of three women in Maryland. His execution is scheduled for January 15. A jury in the U.S. District Court for the District of Maryland found him guilty of several federal offenses and unanimously recommended the death penalty in 2000.

A bureau spokesperson said the employee had “no contact with BOP staff involved with executions in November or December.”

Shawn Nolan, Higgs’ attorney, said the outbreak was likely linked to the executions the government “rushed to undertake” during the pandemic. “Following the two executions that took place last week and one other two weeks prior, the COVID numbers at the federal prison in Terre Haute spiked enormously.  Now our client is sick.  We have asked the government to withdraw the execution date and we will ask the courts to intervene if they do not,” Nolan said.

“While a number of inmates have tested positive for COVID-19 at USP Terre Haute in recent weeks, many of these inmates are asymptomatic or exhibiting mild symptoms,” said Justin Long, a bureau spokesperson. “Our highest priority remains ensuring the safety of staff and inmates.” 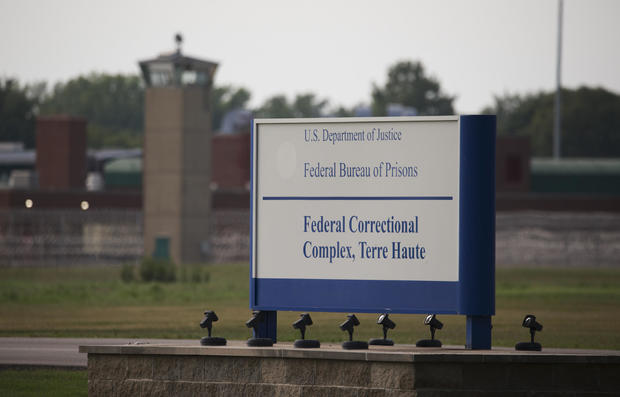 The bureau said they are continuing to test death row inmates and are isolating those who are positive or symptomatic until they are cleared by medical staff.

Under Operation Warp Speed, corrections officers are included in the first round of vaccine distributions along with law enforcement and healthcare workers. The bureau is not commenting on where the vaccine will be delivered due to security reasons, or the quantities that will be received at this time. They do expect a “few” institutions to start receiving the vaccine in different parts of the country.

If all the executions go as planned, Higgs will be the last execution of five scheduled between the election and inauguration. Earlier this year, the Justice Department brought back the death penalty on the federal level after nearly two decades. According to the Associated Press, the federal government carried out more executions than all other states combined in a single year for the first time in history in 2020.