Facebook has made no commitment about how quickly it will act on false political claims that go viral on its platform during the federal election campaign, saying it will be left to independent fact-checking units to determine the time frame for debunking misinformation online.

Parent company Meta, which also owns Instagram, has vowed to deliver its most rigorous approach yet to combating misinformation and election interference ahead of the anticipated federal poll in May, including through a new third-party fact-checking program with RMIT University. 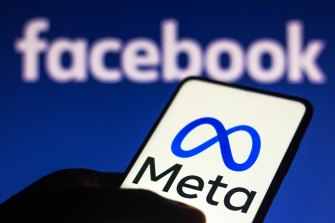 Meta, Facebook’s parent company, is promising to deliver its most rigorous approach yet to combatting online misinformation ahead of the federal election.Credit:Shutterstock

Josh Machin, head of public policy for Meta Australia, said the company had provided one-off grants to RMIT FactLab and its two other existing fact-checking partners – Agence France Presse and the Australian Associated Press – to increase their capacity in the lead up to the election. But it is not clear how well-resourced they will be, with Mr Machin declining to disclose the grant amount on the basis of commercial confidentiality.

He said the fact-checking units would have “full discretion” over how to spend the money and the time-frames for determining the veracity of content circulated on the platform.

Labor has repeatedly raised concerns about the timeliness of responding to false claims, pointing to the lie that circulated on Facebook during the 2019 federal election campaign that the party had signed an agreement with the Greens to introduce a 40 per cent death tax. The claim was ultimately debunked by the AFP fact-checking unit 11 days later.

Labor cybersecurity spokesman Tim Watts said it is up to Facebook and other platforms to ensure their fact-checking processes delivered swift outcomes during the campaign.

“In an election context, a fact-check that comes too late is as good as no fact-check at all,” Mr Watts said.

Once a claim has been deemed false by the fact-checking units, Facebook adds a warning label to the content with a link to the debunking article and notifies users who try to share it. The platform also reduces its distribution so that fewer people see it. The fact-checking process operates separately from the company’s policies around harmful misinformation, such as false claims about COVID and vaccines, which are removed for violating the platform’s community standards.

Claims by politicians or political parties are not covered by the fact-checking process, with Mr Machin saying it was “not appropriate” for Meta to arbitrate the truthfulness of political speech. Third-party fact-checkers will instead concentrate on claims circulated by regular Australians.

Mr Machin defended the fact-checking process at a parliamentary inquiry into online safety earlier this month, saying the independence of journalist units were fundamental to the process, with their editorial judgement informing which claims were most urgent rather than being directed by Meta.

“Many of those decisions around how to prioritise claims, how quickly they’re able to turn them around we leave in the hands of the independent fact-checkers,” he told the inquiry.

The RMIT FactLab will begin fact-checking content for accuracy from March 21, and will be staffed by six recent RMIT journalism graduates on a casual basis. The unit will operate separately RMIT ABC Fact Check – the fact-checking partnership between the university and the public broadcaster.

RMIT FactLab director Russell Skelton said the graduates would review and rate the accuracy of social media posts that relate to Australia and would interview primary sources, consult public data and conduct analyses of media, including photos and video.

“We see this as a really important public service. If we can play a role in preventing the dissemination of misinformation on social media that has the potential to mislead or harm, then we see that as providing a really critical service,” Mr Skelton said.

As part of its election integrity measures, Meta said it was also working with AAP to launch a “Check the Facts” campaign in April, comprising short videos designed to educate people on how to identify misinformation. The campaign will be translated into Vietnamese, Simplified Chinese and Arabic.

“This is by far the most comprehensive package of election integrity measures we have ever had in Australia,” Mr Machin said.