When Florent Devlesaver dances, he wants people to know the dancing is for everyone.

“I want to be seen as a dancer and not a dancer with disabilities,” says the 37-year-old from Belgium.

The dancer is set to make history as the first wheelchair performer to be featured in Just Dance, an interactive video game that’s now in its 13th year. He takes centre stage in the newest edition of the game, performing to Imagine Dragon’s Radioactive.

When Devlesaver was 17, he suffered a work accident that left him wheelchair-bound. In 2010, he began taking classes at a local dance school, and, in 2018 appeared on France’s Got Talent alongside fellow dancer Justin Collins. It was this TV appearance that lead Devlesaver to decide to pursue a career in dance – today, he is involved with various theatre and dance companies across Europe.

Launched in 2009, Just Dance is a motion-based game that allows players to follow along to choreographies set to popular songs. Players are given points and ranked based on the accuracy of their moves. In step with the rise in popularity of dance on platforms like YouTube and TikTok, it has garnered a global following and communities who share videos of themselves playing the game on social media. 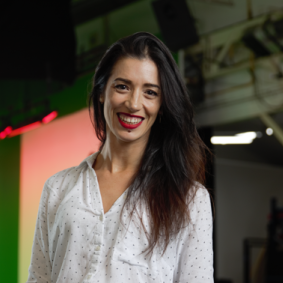 While Devlesaver is the first wheelchair dancer to appear in a Just Dance video, it is not the first time the company has worked with an ethos of inclusion and accessibility. Its universe already includes a dozen-odd routines designed to be performed sitting down that are aimed at the elderly, those with limited mobility, or anyone undergoing physical rehabilitation. In 2021, director of choreography Estelle Manas worked with French amputee Angelina Bruno to create a routine set to The Weeknd’s Blinding Lights. Bruno wears a custom-made prosthetic to match her glowing suit of armour.

Just Dance creative director Matthew Tomkinson says while their core demographic is Gen Z, they’ve seen videos of people of all ages – from three to 94 – play the game. And, he adds, the simplicity of the game itself means its accessibility has always been a drawcard. “You only need to hold the remote to dance. So from the beginning we had [a] community of players using wheelchairs that played the game.”

With Radioactive, Manas says she was inspired to create the dance after seeing a performance at the Handover ceremony for the 2024 Paris Olympics. Choreographed by Saddeck Berrabah (more commonly known as Saddeck Waff), the performance brought together 128 dancers, including Oxandre, one of the first people in the world to be fitted with a bionic arm.

“It’s important for us to be really representative of our players, but also with our dancers,” says Manas who worked with Berrabah to create a routine for Devlesaver. Similar to the performance for the Paris Olympics, the routine uses tutting, a style of dance that involves making angles and shapes with the body, often isolating the hands and arms with precise movements.

Saddeck Berrabah, centre, performed at the Handover ceremony for the 2024 Paris Olympics with 128 other dancers.

Flanked by two dancers, Devlesaver appears in all black, bar a yellow armband (every Just Dance video must include a brightly coloured armband or glove to allow the motion sensors to calibrate the player’s movements with those of the online avatar). As he bends and contorts his arms, the two players on either side respond. “He is the one who controls how the other two move. It’s really powerful,” says Manas.

The new release also comes with a slate of other features designed with accessibility in mind, including more seated versions of some of their most popular dances, and the ability to filter dances by those that do not include floor work or jumping.

For Manas, who has worked for the company since 2019, it’s always been about making dance fun and inclusive. “Everybody can dance. Everybody can be powerful,” she says.

“Every disability is different, and so every experience is different as well,” affirms Devlesaver. “For me, making a place for myself as a dancer in the dance industry is quite complex. The wheelchair is a part of me, of course, but I don’t identify myself through it. This is just one of the many facets of my personality.”

Just Dance 2023 launches November 22 on Switch, PS5, and Xbox Series X|S. The author went behind the scenes of the game as a guest of Ubisoft Paris.