Victoria's opposition has demanded that Emergency Management Commissioner Andrew Crisp return to face a parliamentary committee for the second time, after he wrote a letter this week amending evidence he gave about hotel quarantine.

In the letter, which was released late on Tuesday, Mr Crisp said the evidence he gave on August 26 to the Public Accounts and Estimates Committee that he regularly briefed Police and Emergency Services Minister Lisa Neville was incorrect. 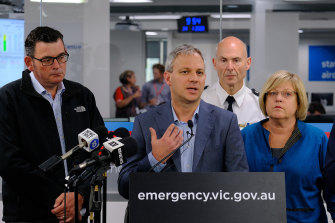 He said he had identified three occasions where he told the committee that he gave Ms Neville a regular update on the establishment of Victoria's hotel quarantine program on March 27 and March 28.

"I wish to correct this in acknowledgment that I did not brief the Minister for Police and Emergency Services throughout March 27 and 28, 2020 with regard to what was being planned," he wrote.

Mr Crisp was one of several top bureaucrats who told the inquiry into Victoria's hotel quarantine programthat he could not recall whose decision it was to employ private security.

Shadow attorney-general Edward O'Donohue has demanded that Mr Crisp be recalled to the committee when it sits from Monday.

The committee is made up of two crossbench, three Coalition and six Labor MPs including the chair, lower house MP Lizzie Blandthorn.

If Sam Hibbins of the Greens and Liberal Democrat MP David Limbrick were to agree with the Coalition members that Mr Crisp should give evidence again, Labor would have the casting vote.

On Wednesday Premier Daniel Andrews said he supported Mr Crisp despite him amending his evidence and he expected him to retain his position heading into bushfire season.

The Premier said his office had not contacted Mr Crisp asking him to change the record.

"No. I think anyone who knows Andrew Crisp knows that's not the way he operates," Mr Andrews said.

"He's made a statement, it's under his signature, on his letterhead. He's a statutory officer. Victorians know and trust him. So do I. I've got nothing but good things to say about Andrew Crisp and the work he does."

Asked if he or any other government officials would be changing their evidence to the parliamentary committee, Mr Andrews said "no".

The hearings in August came into focus when the Premier was asked about hotel quarantine and told the committee that it was "fundamentally incorrect to assert there was hundreds of [Australian Defence Force] staff on offer and somehow someone said no".

Mr Crisp fronted the hotel quarantine inquiry on September 15, where he said the first time he became aware of the program was when he was briefed by Ms Neville.